A few days before the start of Holy Week, the most important liturgical season for the Catholic Church, one of the questions that people may ask is when Jesus died.

In an article published in the National Catholic Register, writer Jimmy Akin gives some clues to pinpoint when this historic event occurred.

1. The high priesthood of Caiaphas

Akin pointed out that, according to the Gospels, “Jesus was crucified at the instigation of the first-century high priest named Caiaphas.”

“We know from other sources that he served as high priest between AD 18 and 36, so that places Jesus’ death in that time period,” he added.

2. The government of Pontius Pilate

The writer indicated that “all four gospels agree that Jesus was crucified by order of Pontius Pilate”, who served as governor of Judea from AD 26 to 36, which reduces the range by 8 years.

3. After the “fifteenth year of Tiberius Caesar”

“The Gospel of Luke tells us when the ministry of John the Baptist began: In the fifteenth year of the reign of Tiberius Caesar. . . the word of God came to John son of Zechariah in the desert [Lucas 3: 1-2]”, he pointed.

Akin added that this year was specifically AD 29, and since the Gospels indicate that Jesus’ ministry took place after John the Baptist began his, “Christ’s death had to be in a range of seven years: between the 29 and 36 AD”.

4. Crucified on a Friday

The writer pointed out that, according to the Jewish Encyclopedia, Friday is called ‘Ereb Shabat (The eve of Saturday), whose term ‘Ereb admits the meaning of “evening” or “mixture”, showing that Friday is the day “where it begins on Saturday, or the day on which food is prepared for both the current day and the following days.”

“That eliminates six of the days of the week, but there were still quite a few Fridays between AD 29 and 36,” he said.

5. A Friday at Easter

The writer noted that, according to John, on Good Friday morning “the Jewish authorities had not yet eaten the Passover meal,” which shows that a “Passover was celebrated beginning on what we would call Friday night.”

Akin indicated that of the eight years between AD 29 and 36, only in two was the beginning of Easter celebrated on a Friday, these dates being Friday, April 7, AD 30, and Friday, April 3, AD 33.

6. The Three Passovers of John

The writer pointed out that in the Gospel of John three different Passovers are recorded during the ministry of Jesus, the first is in John 2:13, near the beginning of the Lord’s ministry, the second in John 6:4, in the midst of the ministry of Jesus. Jesus, and the last in John 11:55, at the end of Christ’s ministry.

“That means that Jesus’ ministry had to span a little over two years. A more complete treatment would reveal that it lasted about three and a half years, but even if we assume that it started immediately before Passover number 1, the addition of two more Passovers shows that it lasted more than two years at a minimum,” he indicated.

Akin pointed out that this rule out AD 30 as a possible day of Jesus’ crucifixion, because “there is not enough time between the fifteenth year of Tiberius Caesar (AD 29) and the following year’s Passover to accommodate a ministry of at least two years”.

“As a result, the traditional date of Jesus’ death, Friday, April 3, AD 33, must be regarded as correct,” he stressed.

Akin noted that “Matthew, Mark, and Luke each record that Jesus died around ‘the ninth hour,'” which in modern time would be around 3:00 p.m.

“This allows us to reduce the time of Jesus’ death to a very specific point in history: around 3:00 pm on Friday, April 3, AD 33,” he concluded.

Today we celebrate Saint Dionysius, Bishop of Corinth and builder of Catholic doctrine

Fri Apr 8 , 2022
According to the writings of Eusebius of Caesarea, Saint Dionysius lived for much of the second century. It is said that he was born around the eleventh year of the reign of the Roman emperor Marcus Aurelius, in the city of Corinth, Greece, becoming bishop of that metropolis, as he […] 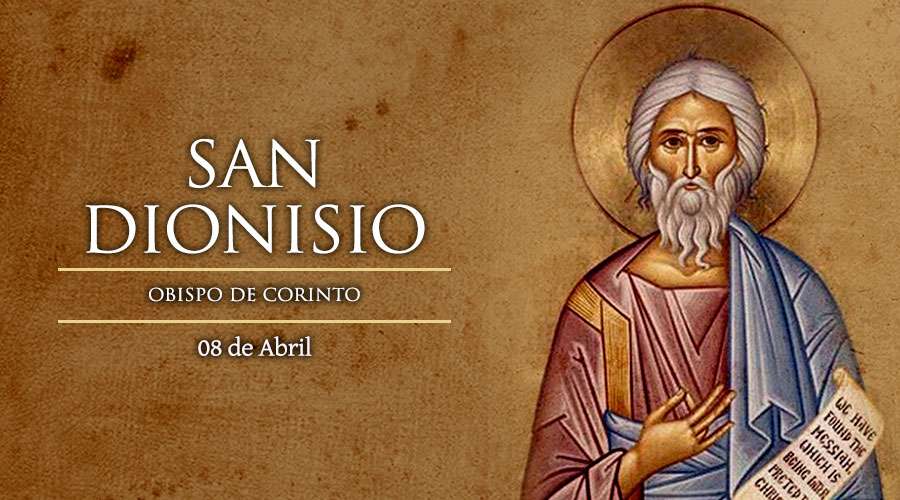