Regina Lynch, director of projects for the pontifical foundation Aid to the Church in Need (ACN), recalled that March marked 11 years of war in Syria, but lamented that the anniversary “has not had much repercussion in the media.”

Lynch recently participated in the conference “The Church as a House of Charity – Synodality and Coordination” in Damascus, the capital and second most populous city in Syria.

In an interview after his visit, he said that although the Syrian conflict “is in danger of being forgotten by the media,” “fortunately” Pope Francis “continues to express his closeness to the Christian community in that country.”

“I believe that the attendance of a Vatican delegation and many non-Syrian charitable organizations at this conference despite all the difficulties, including roads blocked by snow and covid, instills hope in Church leaders and Christians in general. ”, he assured.

The United Nations reports that since the conflict broke out, Syria has witnessed unprecedented devastation and displacement. It also considers that this remains the largest displacement crisis in the world.

More than six million Syrians have fled the country and 6.7 million are internally displaced. With more than 14 million people still in need of assistance, the conflict has caused untold suffering to Syrian men, women and children.

For ACN’s directors, it is thanks to faith that it is possible to promote “much-needed charitable aid in a situation that continues to worsen”, “especially during the coldest months of the year”.

“In many parts of the country temperatures drop below zero at night and at least 90% of the population lives below the poverty linewhich means they don’t have money to buy fuel for heating or to pay for electricity to add extra hours to the few that are supplied by the grid,” he said.

According to Lynch “many Syrian Christians have suffered terrible traumas in the last eleven years”.

“They have lost loved ones, witnessed extreme violence and even received death threats for being Christians. I think faith is the reason so many have resisted,” he said.

Lynch recounted that last year the ACN team visited a woman whose husband was kidnapped – and probably killed – by Islamic extremists in Malula, and “who only finds comfort in the Church and in faith, and in particular in the nuns who support their family”.

“For many Christians, the war has had a positive effect on their faith and has given the Church the opportunity to – despite the hardships – put into practice its teachings on charity and forgiveness,” he added.

He also said that “there are more young people involved in the activities of the Church than ever.” “Given the poverty and challenges of ordinary life, meeting with other young people at church has become more common than before,” she noted.

Regarding the sanctions against the Bashar al-Assad regime in Syria, mainly from the United States and the European Union, Lynch commented that these “affect ordinary people.”

“Inflation is rampant, so [las personas] They can no longer finance medicines or operations, nor buy meat or milk for their children, nor even the bus ticket to go to school or university. Even those with relatives abroad cannot receive money due to bank embargoes. The reality is that most of the sanctions in Syria are hurting ordinary people more than anything. For this reason, the local Church has strongly spoken out against them and we agree with them”, he said in this regard.

According to Lynch “desperation is widespread among Syrian Christians” and that is why ACN is happy to be able to “support initiatives specifically aimed at giving people courage in desperate situations”.

“For example, through the Christian Hope Center in Damascus and Homs, we fund projects to help people rebuild their lives after the war. Across the country, we fund summer camps for impoverished children to become more grounded in faith and find joy in difficult circumstances. Many Christians have little hope, but what they still harbor comes from the initiatives of the Church, ”she assured.

For the ACN directive “it continues to be urgent to provide emergency aid or relief to meet the needs” of the people, but also said that “it is important to focus on young people.”

“We have to strengthen their Christian faith so that they understand that they have a role to play in Syria, and we also need to help young Christian families financially and spiritually,” Lynch concluded.

Today is the feast of San Isidoro de Sevilla, who teaches us to balance prayer and action

Mon Apr 4 , 2022
Today, April 4, the Catholic Church celebrates the feast of Saint Isidore of Seville, bishop of ancient Hispania, polymath and scholar, considered – in the words of Pope Emeritus Benedict XVI – “the last of the Christian Fathers of antiquity”. Family, school of holiness San Isidoro was born in Cartagena, […] 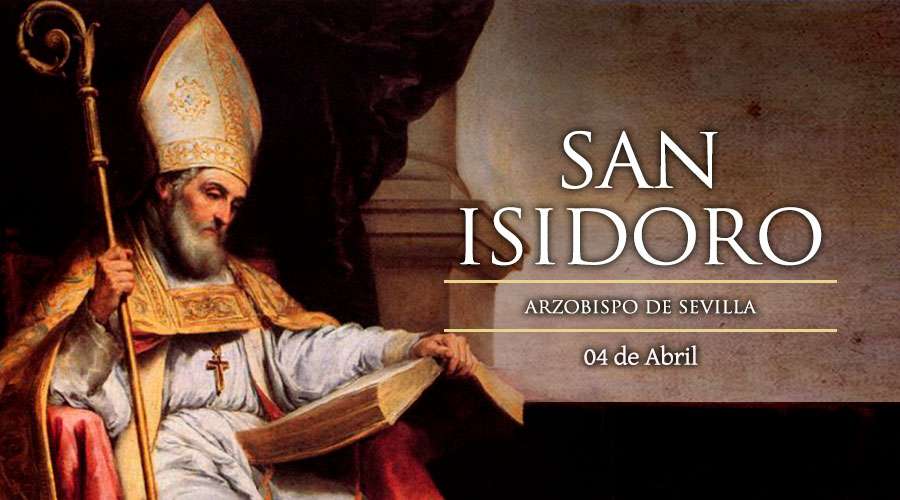