Imagine your wedding day. The ceremony, the dress, the guests, the perfect photo with your bridesmaids… and Tom Hanks. Yes, the actor has done it again, he has sneaked into another wedding, this time in Pittsburgh, where he is shooting the film adaptation of the novel ‘A Man Called Ove’, which was already made into a film in 2015 by the Swedish Hannes Holm. Hanks, probably the nicest man in all of Hollywood, approached the bride, Grace Gwaltney, and asked if he could take a picture with her: “I froze,” he told local media WTAE, “I didn’t know what to do. It was his voice, I think. You see him, but when he started going, ‘You’re so pretty, I’m so happy for you,’ when he whispered that in my ear, all I could think about was ‘Toy Story.'” And we say that “at another wedding” because sneaking into wedding poses seems to be one of his favorite hobbies.

PHOTOBOMB. ? A # Pittsburgh-area bride got a huge surprise on her wedding day Saturday when #TomHanks walked up to her and her bridal party and asked if he could take a photo with them. (via Rachel Rowland) @tomhanks pic.twitter.com/Gg4lN8oZLi

“PHOTOBOMB. A Pittsburgh bride got a big surprise on her wedding day when Tom Hanks approached her at the bridal party and asked if he could have his photo taken.”

“I’m sure other Pittsburgh brides would be thrilled to have her snuck into their photos,” Gwaltney continues, “the bridesmaids got out of the limo and she posed with everyone and then just as quickly as she showed up, she was gone.” ‘A Man Called Ove’, the film that Hanks is shooting, is about a curmudgeonly retiree, a lonely and resentful person, who, after a series of fortuitous circumstances, gradually regains faith in the human race. This new version is directed by Marc Forster (‘World War Z’) and completes the cast Rachel Keller, Manuel García-Rulfo, Mariana Treviño and Cameron Britton.

And besides, you get married

But do not think that the only thing that Hanks does is pretty in the photos, it turns out that the interpreter was also ordained a minister and can officiate at marriages, which he has done the same week that surprised Gwaltney and her friends. According to AV Club, a couple also from Pittsburgh called Krisna and Tyson sent him a letter from her knowing that she would be in the area where they asked him to go marry them at her own house. And there she went. “He’s an amazing guy,” says Tyson, “And the calmness that he gives off, he seems like a best friend you’ve known all your life.” The couple tried to keep the ceremony private, no matter how many Hollywood stars officiated it, but the son they share told the whole school about it, so one of the teachers had to ask them if the boy was lying. “This whole experience has been something surreal and wonderful,” summarizes Krisna, who describes him as a “real” and “sweet” person. Although we don’t know how many weddings Hanks has already celebrated, we do remember the bridal couple he surprised on a beach in Santa Monica in 2018, the one in 2016 in Central Park that he himself uploaded to his Instagram, or the one in 1993, when was shooting ‘Forrest Gump’ and stood up to a bride just before walking down the aisle.

Why do priests wear pink this Sunday of Lent?

Sun Mar 27 , 2022
This March 27 is the Fourth Sunday of Lent, also known as Laetare Sunday or Sunday of Joy, and is marked by some characteristic features such as the fact that the priest wears a pink or pink chasuble. Laetare or Joy Sunday is named after the first words of the […] 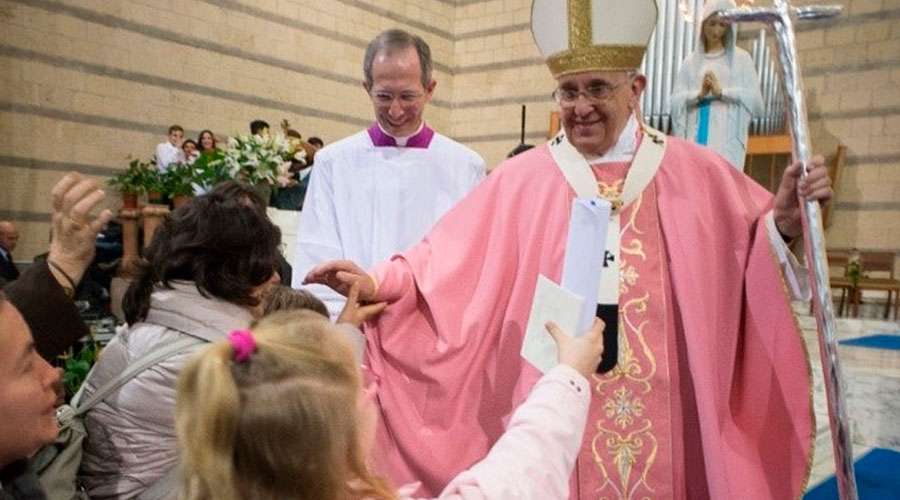