This March 27 the Catholic Church celebrates the Fourth Sunday of Lent. The Gospel of the day corresponds to the reading of Luke 15, 1-3.11-32.

Below you can read the Gospel and the homily of the Bishop of Santa María de los Ángeles (Chile), Msgr. Felipe Bacarreza Rodríguez:

1All the tax collectors and sinners drew near to hear him,
2And the Pharisees and the scribes murmured, saying, “This man welcomes sinners and eats with them.”
3Then he told them this parable.
11He said, “A man had two sons;
12and the youngest of them said to his father, “Father, give me the part of the property that belongs to me.” And he distributed the property to them.
13A few days later the younger son gathered everything together and went to a far country where he squandered his wealth living like a rake.
14“When he had spent everything, a severe famine came in that country, and he began to be in want.
15So he went and settled with one of the citizens of that country, who sent him to his farms to feed pigs.
16And he wanted to fill his belly with the carob beans that the pigs ate, but no one would give him any.
17And coming to himself, he said, “How many of my father’s hired hands have bread in abundance, while here I am starving!
18I will get up and go to my father and tell him: Father, I sinned against heaven and before you.
19I no longer deserve to be called your son; treat me like one of your hired hands.”
20And getting up, he went to his father. «While he was still far away, his father saw him and, moved, ran, threw himself on his neck and kissed him effusively.
21The son said to him, “Father, I have sinned against heaven and before you; I no longer deserve to be called your son.”
22But the father said to his servants, “Bring quickly the best robe and put it on him, put a ring on his hand and sandals on his feet.
23 Bring in the fattened bullock, slaughter it, and let us eat and celebrate,
24because this son of mine was dead and has come back to life; he was lost and has been found.” And they started the party.
25“His eldest son was in the field, and when he came back, when he approached the house, he heard music and dancing;
26and calling one of the servants, he asked him what it was.
27He said to him, “Your brother has returned, and your father has killed the fattened calf, because he has brought him back healthy.”
28He was angry and did not want to go in. His father came out and pleaded with him.
29But he replied to his father, “I have served you for so many years, and I have never failed to carry out an order from you, but you have never given me a kid to have a feast with my friends;
30And now that your son has come, who has devoured your property with prostitutes, you have slaughtered the fattened steer for him!”
31“But he said to him, “Son, you are always with me, and everything that is mine is yours;
32but it was appropriate to celebrate a festival and rejoice, because this brother of yours was dead, and has come back to life; he was lost, and has been found.”

You can review the other liturgical readings of the day HERE

The three “parables of mercy” -the lost sheep, the lost coin and the prodigal son- are grouped in this chapter XV of Luke, because they have in common to reveal to us the joy that occurs in heaven -meaning in God- by the conversion of a sinner. The first two have a conclusion that is incomprehensible to human logic: “There is more joy in heaven for one sinner who converts than for ninety-nine righteous who have no need of conversion” (Lk 15,7.10). It is the divine logic that consists of mercy and gratuitousness. In the parable of the prodigal son, which we read on this Fourth Sunday of Lent, the conclusion, repeated as a refrain, insists on the same thing: “Let us celebrate a party, because this son of mine (this brother of yours) was dead and has returned to life. life, was lost and has been found” (Lk 15,24.32).

To read the full homily you can enter HERE

Today we celebrate Saint John of Egypt, the man who found God in silence

Sun Mar 27 , 2022
Today, March 27, we remember Saint John of Egypt, also known as John the Anchorite or John the Hermit. This saint lived in the fourth century, most of the time, in the desert of Nitria. This place, located on a hill a few kilometers south of Alexandria, is recognized as […] 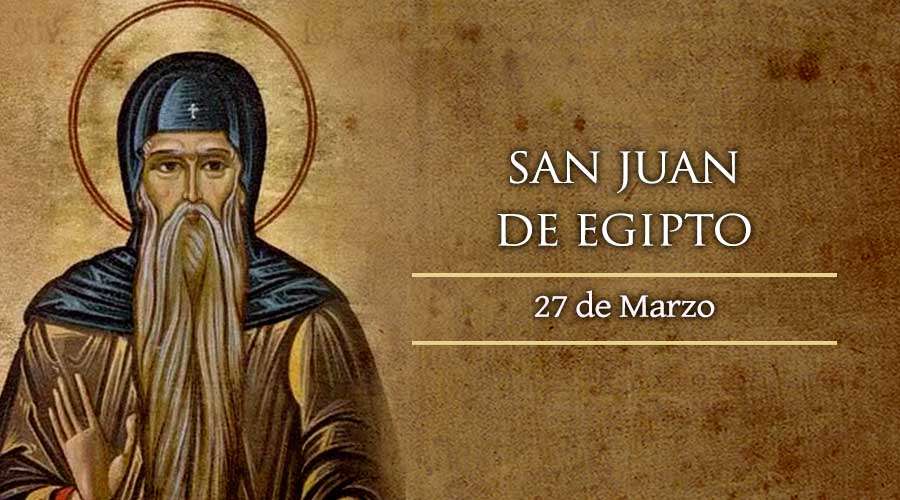