On March 9, the Church celebrates the feast of Santa Francisca Romana (also known as Francisca de Roma), a Benedictine oblate who lived between the 14th and 15th centuries. Her intense life of faith constitutes a beautiful testimony of strength and inspiration, particularly for those women who have gone through – or go through – circumstances similar to those she lived through. It is not an exaggeration to point out that this saint knew how to withstand some of the most difficult tests a woman can go through, and precisely in these trials flourish in hope and love.

And it is that Francisca married very young and had children, two of whom died of the plague. She was married for many years until she would lose her husband in the war. However, faithful to her search for God and her plans, she embraced religious life, forming a spiritual family that survives to this day. For reasons like these, on the occasion of the 400th anniversary of her canonization (Jubilee 2008), Pope Emeritus Benedict XVI called her ‘the most Roman of saints’.

Santa Francesca was born in Rome in 1384. At the age of 12 she experienced her first vocational concerns, however, her parents married her. She, assisted by her faith, not only accepted that marriage, but she formed a beautiful and holy home, which God blessed with three sons. Unfortunately, due to the black plague that devastated Europe, she ended up losing two of her little ones. That tragedy made her very sensitive to her suffering. Francisca decided to distribute her goods and began to care for beggars and the sick. Simple and welcoming as she was, she earned the affection of people who said that whoever came to see her always took some comfort.

Francisca’s husband was part of the army of the Supreme Pontiff. Those were times when the papacy was threatened by political interests that had brought the Church to the brink of schism in the West. Because of this, the pontifical army had to fight numerous battles and Francisca’s husband was almost always absent. Precisely when he was in exile in the Ponzian States, the family lands were plundered. When the husband was able to return to Rome, the city was under the stalk of the Neapolitan army. It is then that Francisca finds out that her husband had been wounded in combat, so the saint goes to her side and assumes her care and company during her agony.

After 40 years of marriage, the saint rediscovered that youthful desire to become a nun. Accompanied by her spiritual director, she began a path that led her to become a religious. On August 15, 1425, the day of the Assumption of the Virgin Mary; Francisca, together with 9 of her companions, made her oblation (consecration) in the confraternity of the Benedictine Oblates (Order of Saint Benedict), who were under the direction of the Olivetan monks. The Oblate regime did not include closure or vows, because their main mission was total dedication to the service of the poorest. Of course, according to the Benedictine spirit, they should dedicate as much time as possible to prayer and meditation.

In 1433 Francisca founded the monastery of Tor de Specchi, to which she moved together with the Oblates who wished to have a life in common and strengthen their service to others. Pope Eugene IV approved the initiative and the women’s group became the only religious congregation of Oblates with private vows and life in common, to this day.

God granted Francisca the grace of being able to see her guardian angel and feel always guided and protected. She described him thus: “She was of incredible beauty, with a complexion whiter than snow and a blush that surpassed the blush of roses. Her eyes, always open turned towards the sky, her long curly hair was the color of gold. burnish”.

In a dialogue with ACI Prensa, held some years ago, the Olivetan Benedictine, Fr. Teodoro Muti, expressed that “Saint Francesca Romana was the Mother Teresa of the fourth century. She was the saint of the poor and needy. She belonged to a rich family and noble, but he assisted the sick in hospitals and was also concerned about their spiritual health.”

Saint Francisca Romana died on March 9, 1440 and was canonized on May 9, 1608 by Pope Paul V. She is the patron saint of Benedictine Oblates and motorists. This is explained according to the tradition that indicates that sometimes when traveling through dark places, her guardian angel would light her path so that she would not stumble.

More information about this saint HERE

These are the multiple risks that women in Ukraine run, according to pro-life foundation

Wed Mar 9 , 2022
In a statement issued on March 8, the Fundación Madrina de España, which next weekend will rescue nearly 200 women and children from the border in Ukraine, reported the multiple risks for women, pregnant mothers and children amid of the conflict with Russia. “Women and their children are the main […] 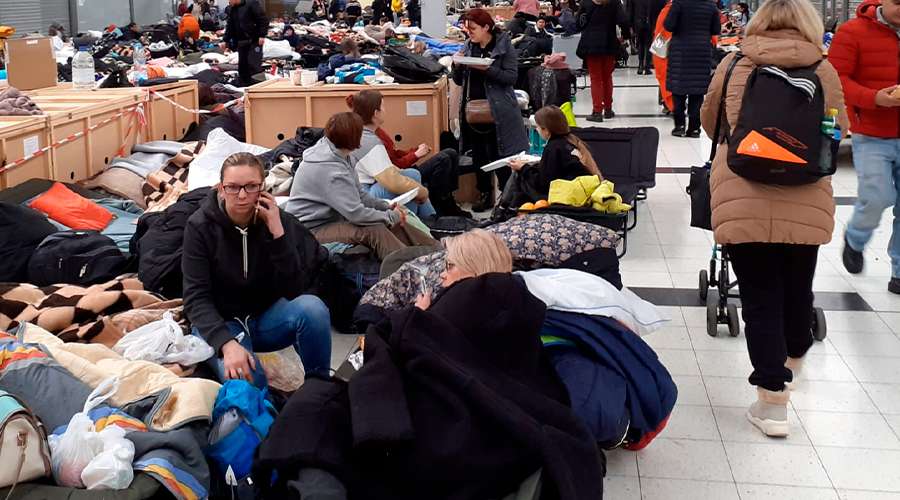