From the San Pedro Apóstol Cathedral, the Bishop of Matagalpa (Nicaragua), Msgr. Rolando José Álvarez, pointed out how the three temptations of the devil to Christ in the desert continue to be used by the evil one to tempt man today.

On March 6, Bishop Álvarez said in his homily that the devil or tempter, “who knows about greed, ambition, pride and vanity”, is present and lurking today; and he assured that the three temptations that the devil used against Christ during the 40 days he spent in the desert, are “like a synthesis of the three great temptations of humanity.”

Next, we present the three temptations of the devil to Jesus in the desert and that continue to affect us today:

1. The temptation of “having”

This manifests itself “when the tempter proposes to turn stones into bread”, and we are tempted to “think that material goods can fill the human heart: ‘have’ instead of ‘be’”, said the Bishop.

“Having material goods at any cost or price, even of one’s own conscience or dignity, becomes a necessity, an addictive vice. For those who have no limits to store in their barns, having becomes their drug that they cannot live without”, and under this logic “everyone could set their own price”, he said. “How much have you sold yourself for? How much have you sold your brother for?” he questioned.

Bishop Álvarez said that although “bread is important, freedom is more important, but the most important of all is constant fidelity and loyalty to principles never betrayed.”

Then, “when this hierarchy of goods is not respected, if not it is inverted, there is no longer justice, there is no longer concern for the man who suffers, but imbalance and destruction, chaos and anarchy are created, one enters the kingdom of arbitrariness”, he explained.

With this temptation “the primacy of God is at stake”, because “history cannot be governed with mere material structures, dispensing with God or using the name of God in vain”, he warned.

“Even the most sophisticated structures, if they are not born from a new and repentant heart, become the most unjust and intolerant. If the heart of man is not good, nothing else can become good, and the goodness of the heart can only come from the One who is goodness itself, the good”, he underlined.

two. The temptation of “power”

It manifests itself “when the tempter offers to dominate creation in exchange for an act of worship. It is about the temptation of power over the kingdoms of the earth, power over serving,” he said.

Bishop Álvarez said that “the tempter offers dominance over the other. What is your kingdom? How big or small can it be? It doesn’t matter, what counts here is: ‘I’m in charge,’ ‘Whatever I say is done here’”.

He explained that “these expressions indicate that there are no limits and creation is dominated by destroying, destroying property, borders, reaching unlimited irrational powers that come to overwhelm and destroy man himself.”

3. The temptation of “pleasure”

This is “the temptation of the spectacular fall from the eaves of the temple, the ambition, the easy and comfortable success over the day-to-day effort”, said Bishop Álvarez.

The Prelate observed that here “the tempter cites Sacred Scripture to make Jesus fall into the trap. The tempter shows himself to be a great connoisseur of the Scriptures, he presents himself as a theologian”.

In this regard, he stated that “today it is intended to subject the Word of God to pseudo-ideological visions. It is intended to instrumentalize particular or personal interests.”

This temptation “is the pretense of silencing God and supplanting him with all the pleasures, with hedonism, once again ceasing to exist the limits. After the bread you have to offer something sensational. Bread and circuses or the crumbs of the rich Epulón”, he pointed out.

However, he recalled that “in the fight against Satan Jesus has won” and that “the glory of Christ, humble and willing to suffer, the glory of his love has not disappeared, nor will it disappear”.

“In the face of the fraudulent deification of power, of ambition, of the greed for money. Facing the lying promise of a future, which through temporal powers guarantees everything to everyone. He counterposes the divine nature of God,” she observed.

However, “God as the authentic good of man, faced with the invitation to worship power, the Lord pronounces a few words: ‘You will worship the Lord your God and only Him will you worship,'” he added.

Finally, Bishop Álvarez asked to remember that “Jesus has entered the human drama, human poverty, descends to the dangers that lie in wait for man and therefore goes to the desert”; and he called on his compatriots to unite in prayer this Lent to defeat evil at the hand of God.

“Nicaragua, let us ask Jesus not to leave us in the desert and not to allow ourselves to be defeated by the devil, rather to defeat evil with the indestructible force of good. So be it,” he concluded.

Today we celebrate the 40 martyrs of Sebaste, the brave soldiers who froze to death

Thu Mar 10 , 2022
Every March 10, the universal Church remembers the 40 martyrs, better known as the martyrs of Sebaste. Around the year 320, the Roman emperor Licinus issued a decree ordering the death penalty for any Christian who is not capable of renouncing his faith. A group of brave soldiers of the […] 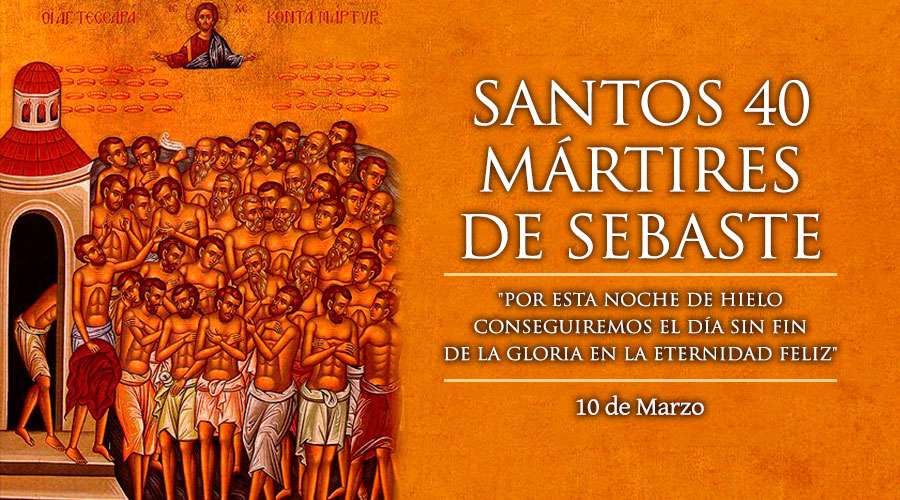