Soon, the faithful will be able to see what the house of Saint Gianna Beretta Molla was like and venerate her relics, in a new pilgrimage center that will be built in honor of the patron saint of life and family in the United States.

With the encouragement of Gianna Emanuela, the youngest daughter of Saint Gianna Beretta Molla, who was born thanks to her mother saying “no” to abortion at the cost of her own death, a pilgrimage center will soon be built near Springfield, Illinois. dedicated to the fruits of the life of the saint and her husband Pietro.

According to the National Catholic Register, news of the pilgrimage center’s construction broke in 2018, at a spring gala in Fargo, North Dakota, where the youngest of St. Gianna’s four children was in attendance. At the event it was reported that the work would not be in Italy, as originally planned, but in the United States, where there is great devotion to the saint, the Catholic newspaper explained.

The Register noted that since that event a foundation was established in North Dakota to spread the memory of this exemplary couple, and announced that after “a search of several years”, they now have a place to build it.

The saint’s daughter, Gianna Emanuela, told the Register that the center “will include a replica of the house of her holy parents on Ponte Nuovo de Magenta, in Milan, Italy,” specifying that “in each room, the original furniture will be placed.” ”, the ones that “I am using in my daily life”.

According to the Register, Pietro Molla, who died in 2010 at the age of 97, said long before he died how he wanted the center to be.

The pilgrimage center will include an “interactive exhibit” that will show the life story of the married couple, and will have “outdoor rest spaces” with panels that will carry “the virtues that my parents expressed in their writings and in their lives” explained Gianna Emanuela.

The saint’s daughter said that a replica of the church of the spouses’ homeland, the “Chapel of Our Lady of Good Counsel”, will also be erected in the center, which will guard the relics of Saint Gianna Beretta Molla, who died at the 39 years, and the memories of Pietro.

Gianna Emanuela said that it is the chapel to which her father “attributed the grace of meeting my mother.” Pietro asked Our Lady of Good Counsel “to allow him to find ‘a holy mother for his [futuros] children,'” he said.

The Sanctuary Church of Santa Gianna, whose feast day is April 28, will remember through wall paintings the main moments of the life of the couple. In addition, it will have an artistic representation of the Sacred Hearts of Jesus, Mary and Joseph on the ceiling, “with, perhaps, two wedding rings in the middle,” said Gianna Emanuela.

The pilgrimage center will also provide a home for Gianna Emanuela, who often travels to the United States “to give talks about her mother.” In addition, it will include a rectory for visiting clergy, as well as a Via Crucis and a path to pray the Rosary.

Tim Elliott, pastor of St. Gianna’s Church in Wentzville, Missouri, and vice president of the foundation, met Gianna Emanuela in 2015, and has been traveling ever since to find a place to build the center. She is “a very clear reflection of her mother” and a living gift to all, he said.

The priest was sorry to see that today there are many broken families and people who do not understand the beauty and dignity of the sacrament of marriage, and he hopes that the center will help prove otherwise, through the example of Saint Gianna and her family.

Pilgrims “will be able, in a sense, to enter the life of the family,” experiencing the “pro-life, pro-family agenda that came from their family and marriage,” he said.

Mary Pat Jahner, who traveled to Italy to meet the saint’s family and is now a close friend of Gianna Emanuela, told the Register that Pietro Molla gave her a tour of the house, showing her his piano, paintings and other items that revealed their life together.

“I was so shocked at how much he still loved her,” she said. “They had a beautiful and romantic relationship, and in many ways Pietro is how we know Santa Gianna,” she added.

“It is a great gift to have Saint Gianna as our patron saint,” he said. “I think St. Gianna has really brought us into her whole family,” she concluded.

Mon May 9 , 2022
Every May 9, the Church celebrates Saint Louise de Marillac, an intelligent and determined woman who led the reform of social services care in the France of her time. Luisa was married but became a widow, later finding in the Lord the whole reason for her existence. She was co-founder, […] 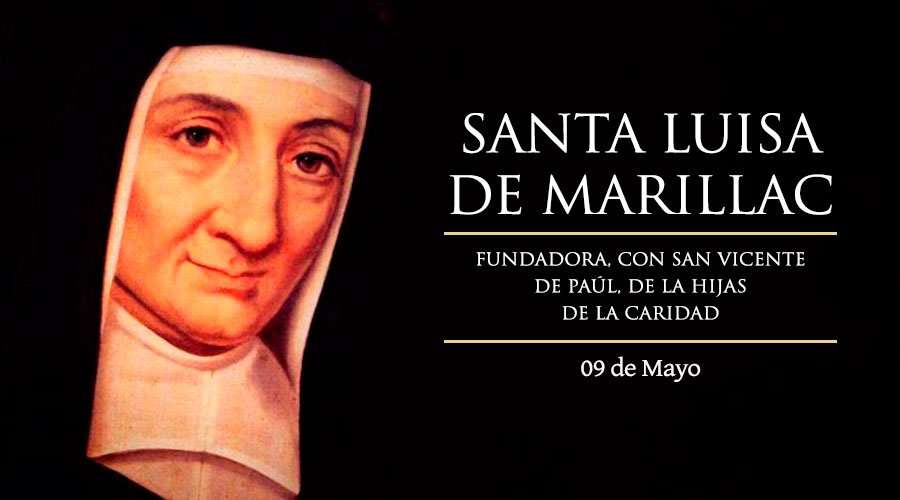