The Archdiocese of Lima, governed pastorally by Bishop Carlos Castillo Mattasoglio, decided to remove from the Cathedral of Lima a commemorative painting of the visit of Saint Josemaría Escrivá on June 25, on the eve of his feast.

The painting was presented by the Personal Prelature of Opus Dei to the Archdiocese of Lima, on the occasion of the 30th anniversary of the visit of its holy founder to the Peruvian Cathedral, on July 14, 1974.

The picture it was placed in the chapel dedicated to Our Lady of Evangelization of the Cathedral of Lima on June 26, 2005, the feast of Saint Josemaría Escriváand remained there for almost 17 years until his recent retirement on June 25, 2022.

In replacement of the painting of the founder of Opus Dei, the Archbishopric of Lima placed a smaller image of the Virgin Mary. Chapel of Our Lady of Evangelization, from where they took the painting of Saint Josemaría Escrivá, now has a small image of the Virgin Mary on the wall. Credit: ACI Press.

In the painting removed by the Archbishopric of Lima, the following message can be read: “In this chapel, on Sunday, July 14, 1974, Saint Josemaría Escrivá de Balaguer, founder of Opus Dei, prayed before the Blessed Sacrament, accompanied by Mons. Álvaro del Portillo and Bishop Javier Echevarría”.

“Through the mediation of Our Lady of Evangelization, we raise our fervent Thanksgiving to the Blessed Trinity for the innumerable benefits received,” the message added.

“On June 26, 2005, being Archbishop of Lima His Eminence Juan Luis Cipriani, Primate of Peru” reads at the bottom of the message, remembering the predecessor of Bishop Castillo Mattasoglio in the Peruvian Archdiocese. Detail of the painting of Saint Josemaría Escrivá, the work of the Mexican architect Arturo Guerrero. Credit: Archive / Archbishopric of Lima.

ACI Prensa repeatedly wrote and called Juan José Dioses, director of communications for the Archbishopric of Lima.without obtaining a response on the reasons for the withdrawal of the image.

The painting, three meters high and painted by the Mexican architect Arturo Guerrero, it is found wrapped in paper in a corner of the Cathedral of Lima, lying on one of the walls of the temple and covered by a confessional. The painting of Saint Josemaría Escrivá, wrapped in paper, in a corner of the Cathedral of Lima. Credit: ACI Press.

According to what Lino told ACI Prensa, the painting is “thrown in a corner”, for which he requested an audience with Bishop Castillo Mattasoglio to find out where you will be relocated.

“The portrait, which I know was in good condition, represents a historical event and is part of the devotion of many faithful like me, who without being from Opus Dei have great affection for the saint,” said Lino, who worked for 7 years at front of the communications of the Primate Archbishopric of Peru.

“The idea is to seek answers, gestures, as Pope Francis says, that unite us as a Church. I am sure Bishop Carlos thinks the same”, he indicated.

ACI Prensa consulted Opus Dei about the removal of the painting of Saint Josemaría Escrivá and until the closing of this edition did not receive a response.

On the Opus Dei website it is indicated that on July 14, 1974, “As soon as he arrived at the Cathedral, Saint Josemaría went to the chapel of the Blessed Sacrament and spent a while in prayer. On the sides of the Tabernacle there was an image of the Virgin and another of Saint Joseph. Don Álvaro del Portillo commented to him in a low voice: – The Lord here is very well accompanied. Saint Josemaría agreed and said: – There is the Trinity of the earth”.

“He also prayed before the image of Our Lady of Evangelization,” he adds, referring to the moment that was immortalized in the painting recently removed by the Archbishopric of Lima.

Today we remember the holy protomartyrs of Rome, victims of the first persecution

Thu Jun 30 , 2022
Today, June 30, we remember the “Holy Protomartyrs of the Holy Roman Church”. These died during the first persecution in history organized against the Catholic Church (second half of the 1st century). They suffered terrible torments and gave their lives just to call themselves “Christians”, followers of Jesus of Nazareth. […] 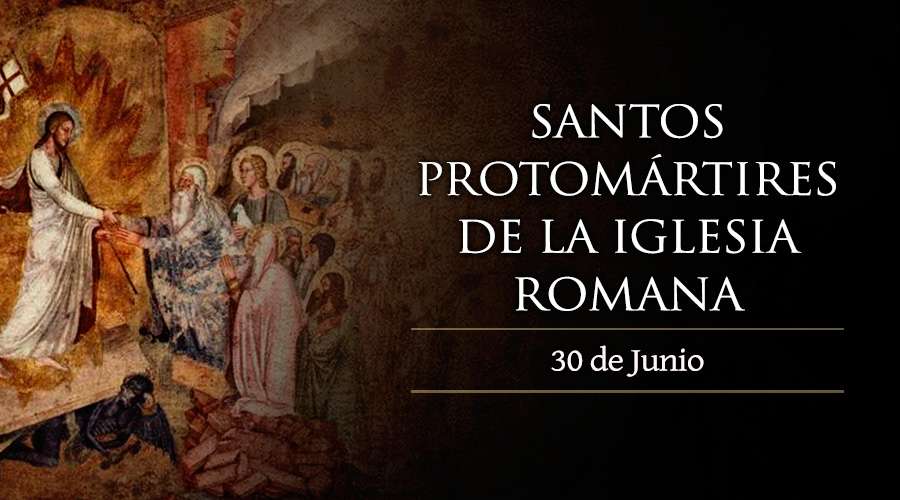