Joseph Pronechen, Catholic writer and author of the book Fruits of Fatima – Century of Signs and Wonders, recalled some of the phrases with which saints have expressed their devotion to Saint Joseph through the centuries.

“With San José, the old truism comes to mind: ‘Actions speak louder than words. The Saints know this firsthand and show us how we, too, can have the same bond of friendship and fellowship,’” Pronechen said in an article published in the National Catholic Register.

Next, the phrases of 14 saints and blessed about Saint Joseph.

The Spanish saint was the nun who reformed Carmel in the 16th century, founded the Order of the Discalced Carmelites, and was declared a Doctor of the Church. She was characterized by her simplicity, prudence, kindness and charity.

Saint Teresa had a profound life of prayer and was so devoted to Saint Joseph that she named all her monasteries after him and left us a series of phrases that teach us the love and graces she received through the intercession of Saint Joseph.

“I took glorious Saint Joseph as my lawyer and lord and sincerely entrusted myself to him; and I found that this my father and lord delivered me both from this problem and other greater problems connected with my honor and the loss of my soul, and that he gave me greater blessings than I could ask of him.”

“I don’t know how anyone can think of the Queen of Angels, during the time she suffered so much with the Child Jesus, without thanking Saint Joseph for the way he helped them.”

“The Lord seems to have given other saints the grace to help us in some of our needs, but my experience of this glorious saint is that he helps us in all of them and that the Lord wishes to teach us that as He Himself was subject to him on earth (because, being His guardian and being called His father, He could command Him), in the same way in Heaven He still does everything He asks. This has also been the experience of other people whom I have advised to entrust themselves to him; and even today there are many who have great devotion to him for having once again experienced this truth.”

“I do not remember even now that I have asked him for something that he has not granted me. I am amazed at the great favors that God has granted me through this venerable saint, and the dangers from which he has freed me, both in body and soul.”

“For a few years now, I think, I have made a request of him every year at his party, and he has always granted it. If my request is misdirected in any way, he directs it correctly for my highest good.”

“I wish I could persuade everyone to dedicate themselves to this glorious saint, because I have a great experience of the blessings that you can get from God. I have never met anyone who is truly devoted to him and renders him particular services who have not remarkably advanced in virtue, for he renders very real help to souls who entrust themselves to him.”

“I only pray, for the love of God, that he who does not believe me will put what I say to the test, and he will see by experience the great advantages that derive from entrusting himself to this glorious patriarch and having devotion to him.”

The Italian saint was a Franciscan preacher and missionary who was born in the late 12th century and whose sermons served as models for many speakers in the following centuries. He once said that “Saint Joseph was the living image of his Virgin Spouse; They resembled each other like two pearls.”

The Italian saint, priest and Doctor of the Church, is recognized for laying the foundations of what we know today as Theology and his most famous work is Summa Teologica.

He said: “There are many saints to whom God has given the power to help us in the necessities of life, but the power that has been given to Saint Joseph is limitless: it extends to all our needs, and all those who invoke him confidently they are sure to be heard.”

This saint was a bishop known for his kindness and for fighting for several years of his life to control his anger and achieve the conversion of many. Today’s Doctor of the Church once said: “Nothing will be denied [a San José]neither by Our Lady nor by her glorious Son”.

The famous Italian saint of the 18th century, also a Doctor of the Church, is recognized for his writings on morality and his great devotion to Mary. Among his most famous works are “The Glories of Mary.” He once said that: “There is no doubt about it: just as Jesus Christ wanted to be subject to Joseph on earth, so he does everything that the saint asks of him in Heaven.”

“The holy example of Jesus Christ, who, while on earth, so honored Saint Joseph and was obedient to him during his lifetime, should be enough to inflame the hearts of all with devotion to this saint.”

This French saint was a priest who founded the Congregation of the Blessed Sacrament and is a Doctor of the Church. He once said that “devotion to Saint Joseph is one of the choicest graces that God can give a soul…When God wants to raise a soul to greater heights, He unites it to Saint Joseph, giving it a strong love for the good saint. ”.

In addition, he advised the following: “Make him [a San José] the patron of your family, and soon you will have tangible proof of his protecting hand.”

The Italian Capuchin friar and priest, known as the Saint of Stigmata, said: “Saint Joseph, with the love and generosity with which you guarded Jesus, so will he guard your soul, and as he defended him from Herod, so he will defend your soul of the most ferocious Herod: the devil! All the affection that the Patriarch Saint Joseph has for Jesus, he has for you and he will always help you with his patronage. He will deliver you from the persecution of the wicked and proud Herod, and he will not allow your heart to be separated from Jesus. Ite ad Joseph! Go to José with extreme confidence, because I, like Saint Teresa of Ávila, do not remember having asked Saint Joseph for anything without having obtained it willingly”.

The Italian-born saint was elected pope in 1903 and was known for focusing his pontificate on promoting the Eucharist, to the point that he encouraged receiving the Body of Christ daily, if possible. He said: “All for Jesus, all for Mary, all to your example, O Patriarch, Saint Joseph.”

The Italian saint was elected Pontiff in 1963 and is known for defending life and the family with his encyclical Humanae vitae. He said: “Rejoice, devout servants of Saint Joseph, because you are close to paradise; the ladder that leads to it has only three steps, Jesus, Mary and Joseph.”

The Italian saint was a mystical Carmelite nun of the 16th century who experienced the stigmata and suffered many temptations and physical pains, which she patiently offered for the salvation of souls. She said, “He [San José] always favors with special protection those souls who are registered under the banner of Mary”.

The saint was a Franciscan priest considered one of the best preachers in Italy, who highly esteemed the prayer of the Holy Way of the Cross. Saint Leonard said: “He [San José] It is proof that to be a good and genuine follower of Jesus Christ, great things are not needed, it is enough to have the common, simple and human virtues, but they must be true and authentic”.

The eighteenth-century French blessed was an apostolic missionary and preacher who, due to his great vocation to the Virgin, founded Marian institutes. He said: “A servant of Mary will have a tender devotion to Saint Joseph, and with the pious homage of respect and love from him, he will strive to deserve the protection of this great saint.”

“Make her [a San José] responsible for the protection of your person, he, who saved the life of his Savior. May he take charge of your salvation.”

The Polish nun born in the mid-nineteenth century founded the Congregation of the Sisters of the Holy Family. The Blessed said: “If it is true that the Blessed Virgin is the guardian of all heavenly graces, that her love for the elect is the source of her glory and happiness, what must be the glory of Saint Joseph, whom she had to love above all saints, just as a good wife should love her husband more than all men.”

The Italian saint was a Franciscan priest and missionary in China, where he translated the first complete version of the Holy Scriptures in Chinese. The saint said: “May he [San José] Obtain for us the capacity of Saint Dominic, Saint Vincent Ferrer and Blessed Alan de la Roche to promote the Rosary”.

Today is the Solemnity of Saint Joseph, Husband of the Virgin Mary and custodian of the Catholic Church

Sat Mar 19 , 2022
Today, March 19, the Catholic Church celebrates the Solemnity of ‘Saint Joseph, husband of the Virgin Mary’. Joseph is a central character of our Catholic faith by divine design, since God granted him the incomparable privilege and blessing of being at Mary’s side, and of raising her own Son with […] 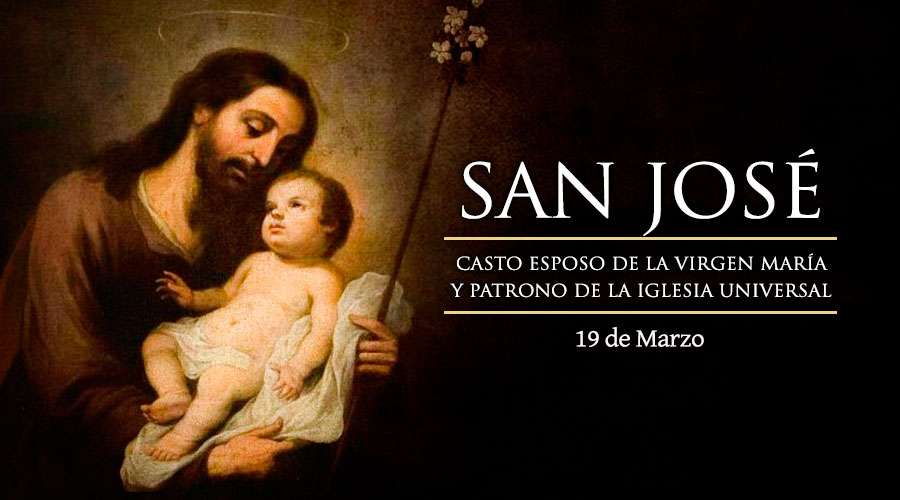