When Eugenie of York and Jack Brooksbank married on that windy October 12, 2018 at St George’s Chapel in Windsor Castle, many looked to Beatrice of York, the only remaining adult granddaughter of Queen Elizabeth and the Duke of Edinburgh. to remember that she would be the next to star in a royal wedding in the United Kingdom. Coincidence or not, at that time she met, or rather, she met again, because her families knew each other very well, with Edoardo Mapelli Mozzi, businessman and British aristocrat of Italian origin. Edo Mapelli was then with Dara Huang, mother of his son Wolfie, but he did not hesitate to break their relationship by falling in love with the daughter of the Dukes of York. Since then everything went very fast and in September 2019 they announced their engagement. Unfortunately, her happiness coincided with the pointing out of Prince Andrew for his relationship with pedophile Jeffrey Epstein, which undoubtedly overshadowed the joy of a couple who wanted to formalize their love as soon as possible. 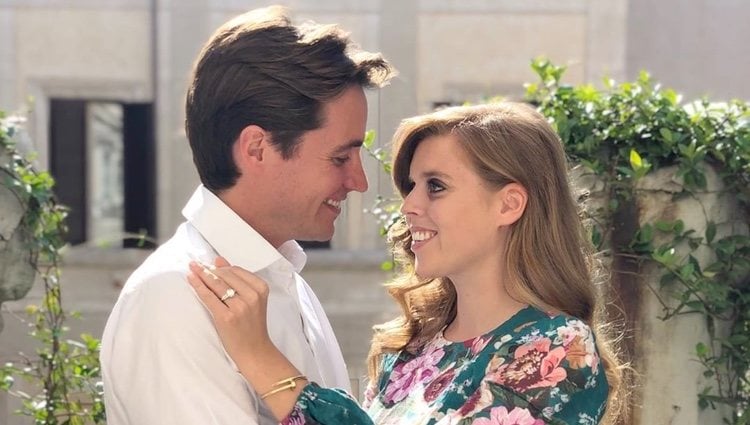 The wedding was set for May 29, 2020 at the Chapel of St James’s Palace in London, the scene of royal marriages and baptisms, including that of Beatrice of York herself. In addition, aware of her granddaughter’s disgust at having her wedding become a source of concern after the Duke of York’s departure from the British Royal House after the disastrous interview on ‘Newsnight’ that he gave to clear his name and that generated the opposite effect, Queen Elizabeth had a detail. She granted the couple the use of Buckingham Palace for the wedding banquet, a gesture that she had had 9 years ago with Prince William and Kate Middleton, higher in rank as the future Princes of Wales first and Kings later.

But everything that could go wrong, did go wrong. It happened to Beatriz de York and Edoardo Mapelli Mozzi like so many other couples who had planned their wedding since spring 2020. With the outbreak of the pandemic they were forced to cancel their link without knowing when they could get married. At least, considering that Prince Andrew was persona non grata, a televised royal wedding with the Duke of York was avoided by walking his daughter down the aisle. It would no longer be like that, and not even because of the pandemic, but because it had been stipulated that the wedding would be as private as possible. No cameras, no greetings and no carriages, something that Eugenie of York and Jack Brooksbank did have. 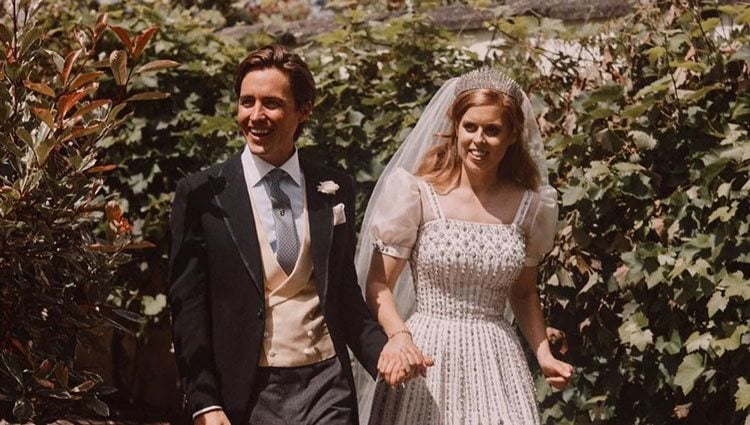 The surprise came when the British Royal House announced that Beatrice of York and Edoardo Mapelli Mozzi had been married by surprise on July 17, 2020: “Congratulations to Her Royal Highness Princess Beatrice and Mr. Edoardo Mapelli Mozzi! The couple married in a small private ceremony at the Royal Chapel of All Saints at Royal Lodge, Windsor on Friday July 17. Princess Beatrice and Lord Edoardo Mapelli Mozzi celebrated their wedding with their closest family.The happy couple are pictured with Their Majesty the Queen and the Duke of Edinburgh.” The Queen lent her granddaughter a Norman Hartnell dress that she had premiered at the premiere of ‘Lawrence of Arabia’ in London on December 10, 1962 and which she had made up for the occasion, as well as Queen Mary’s diamond fringe tiara. , the same with which Elizabeth II married the Duke of Edinburgh in 1947.

There were around 20 guests who enjoyed an after party at the Royal Lodge and celebrated this wedding that was not as the bride and groom had planned, but which was undoubtedly a success considering their options and what came after. The first thing is that Beatrice of York and Edoardo Mapelli Mozzi wanted to get married as soon as possible and did not want to wait any longer. The situation was uncertain due to the pandemic, and there was no guarantee that if they delayed the wedding any longer they could marry in St James and hold the banquet in Buckingham. They therefore opted for something simple in Windsor after the first confinement that the United Kingdom experienced. 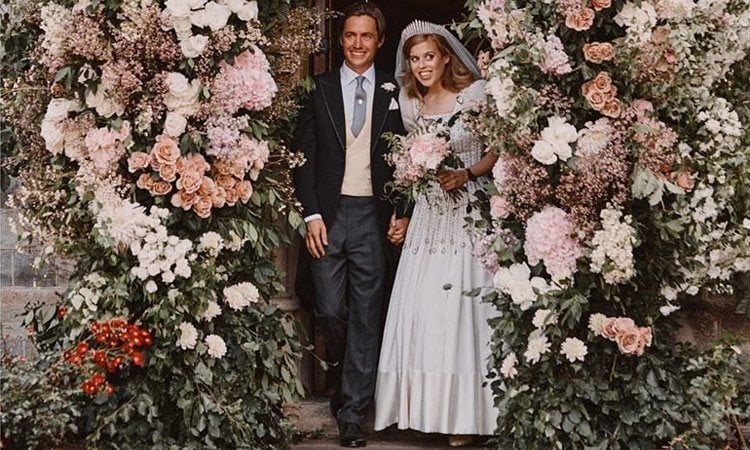 Beatrice of York and Edoardo Mapelli Mozzi at their wedding

It was a success because her father could be the godfather without problems. She wouldn’t have been allowed to do it at a royal wedding in the usual style, but at an intimate wedding with no cameras and people nearby there was no question that Prince Andrew would have such an important role. The worst was yet to come for him when Virginia Giuffre accused him of sexual abuse when he was a minor, an issue that cost him to be definitively expelled from the British Royal House and that he resolved with an out-of-court settlement that avoided problems in court, but that it did not improve his battered public image.

He was able to have his grandfather at the wedding

It is also clear that he is grateful for having married at that time because that way he could count on the presence of the grandparents. At that time, Queen Elizabeth was in very good health, and she did not have to travel too much as the wedding took place very close to Windsor Castle. But above all, the Duke of Edinburgh was there in what was the last link she attended. Prince Philip died on April 9, 2021 at the age of 99, giving him less than 9 months to live at the time. If Beatrice of York and Edoardo Mapelli Mozzi had waited for the end of the pandemic, they would have lamented the absence of the Duke of Edinburgh. Prince Philip was a fundamental figure for Beatrice of York, who she admits that she cannot help but cry when she remembers him, something that happened in the tribute that she paid him in Westminster Abbey on March 29, 2022 . 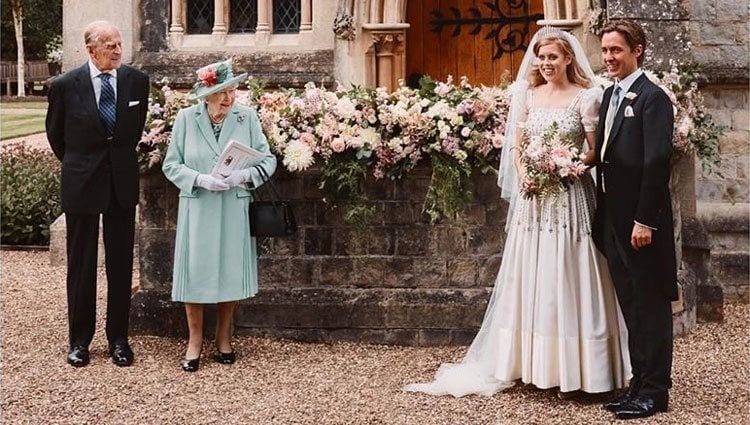 In addition, Princess Beatrice and Edo Mapelli wanted to have a child together as soon as possible, and although in Monaco the royals have children before marrying without problems, it would not be seen in the same way within the British Royal Family. Thus, the couple married on July 17, 2020 and 14 months after their wedding they were the parents of a girl named Sienna Elizabeth. Their happiness was complete and it mattered little to them that they had married in a simple wedding. The important thing is that they took the step they wanted to take, that they were happy and that looking back they know they made the right decision.

Archbishop in Peru recalls that there is no right to euthanasia: "It is a crime"

Mon Jul 18 , 2022
The Archbishop of Piura, in the north of Peru, Msgr. José Antonio Eguren, recalled that “there is no right to dispose of the life of others” nor that of oneself, commenting on the recent decision of the Supreme Court to ratify the access to the euthanasia of Ana Estrada, a […] 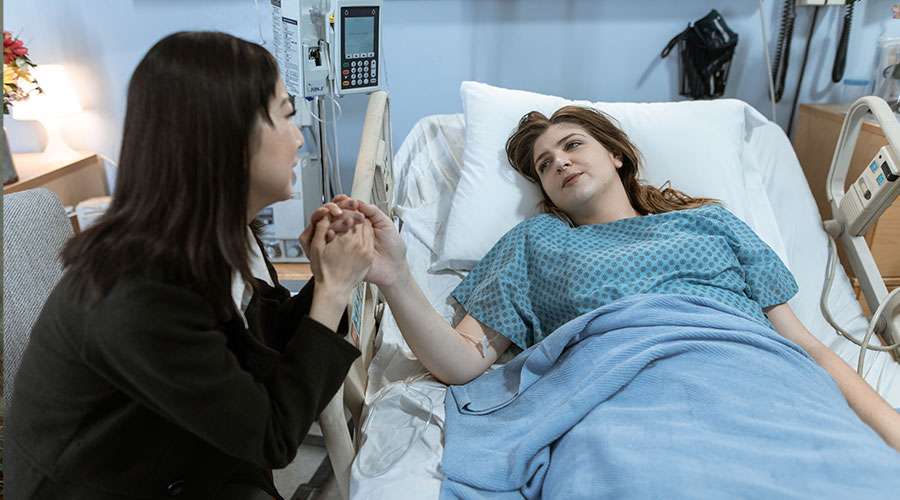