Princess Leonor and Infanta Sofía have many qualities, something that is being seen little by little despite the fact that they are not yet well known. Both are good students, participative and although they seem shy, especially the Princess of Asturias, they are not so much, although in their official appearances they are somewhat restrained.

However, in each official act in which they appear, the general feeling is always good. This happened on the occasion of the 2022 Princess of Girona Awards ceremony, where they were first in Figueres to attend a work session on the new programs of the Princess of Girona Foundation and took a guided tour of the Dalí Museum in Figueres, to fulfill his agenda in Barcelona the next day.

The first of the acts in which they participated in Barcelona was attending a coding workshop given by Hadi Partovi, CEO of Code.org, and which included the participation of three former winners and six young people from the ‘Generation teachers’ who have been trained in programming with the aim of bringing the language of code into the classroom. It took place in the gardens of the Palacete Albéniz, in whose building King Felipe and Queen Letizia were meanwhile holding a meeting with the members of the Advisory Council of the Princess of Girona Foundation. 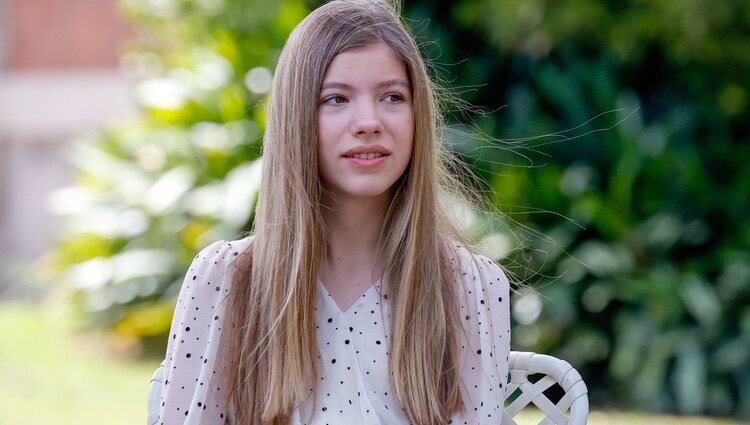 Photos of Princess Leonor and Infanta Sofía were taken during this workshop, as well as Don Felipe and Doña Letizia, who joined at the end. Of course, Casa Real published a video on its YouTube channel as a summary of the activity, a successful initiative that has become customary and that would have been a perfect opportunity to see the Princess of Asturias and the Infanta Sofía not only listening to Hadi Partovi, but speaking in English, contributing and participating. It was not so.

they know what they are talking about

In the video an intervention is heard, but it is that of a young man who was sitting next to the Princess of Asturias. The daughters of the Kings were not heard, and that they contributed and showed how prepared they are and how talented they are. But if it is known, it is because the founder and CEO of Code.org told it, who in statements collected by Vanitatis highlighted that the daughters of Felipe VI were very participatory: “They have intervened a lot. They have asked many questions and have talked about their experience” .

In addition, Princess Leonor and Infanta Sofía knew what they were talking about because “both have taken computational thinking courses at their school. It has been a pleasure talking to the computer science princesses and having been able to show them my platform, although I already they knew her because they learned CODE at her school,” added Hadi Partovi. However, the Royal House preferred not to directly show this talent of Princess Leonor and Infanta Sofía.

Review | Minions 2: Origin of Gru goes against its own predecessor

Tue Jul 5 , 2022
It is not news that the big studios, mainly the North American ones, are willing to reheat and squeeze any product that makes a considerable success based on already known items, prolonging possible box office, merchandising and unexplorable universes. This brings us to Minions 2: A Origem de Gru (Rise […]