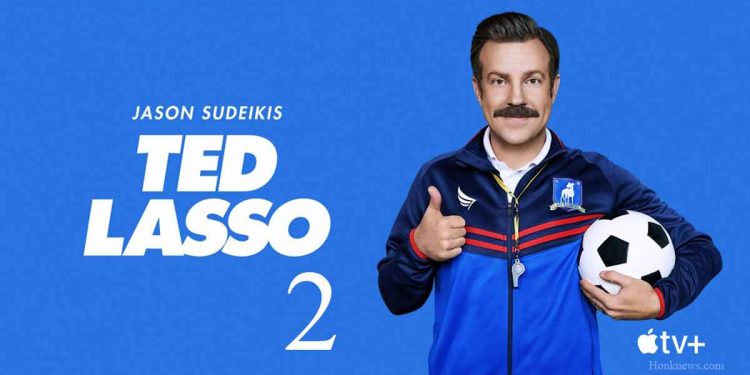 In the world of growing entertainment around us, we are eagerly loving the whole concept of watching amazing shows on the weekend. Lockdown has taught us a lot of things and many people have been loving the idea of binge-watching. Though the new term has become popular, there are still many new series which are perfect, One of them is Ted Lasso. Lately, Ted Lasso’s season 2 is up on the television and you should definitely know what it is.

Recently released, Ted Lasso’s season 2 initially started releasing its first season in 2020. Instantly. The show gained a massive amount of fan base and even became one of the most-watched series of the year. Within a few days, the creators eventually renewed the series for its season 2.

A Comedy entertainment drama is always lived by the audience and this AppleTV+ show has been up to many achievements and appreciations. Not only this but the fanbase of Ted Lasso is truly insane. Within the days of Ted Lasso’s season 2 announcement, fans took over the internet to show their excitement and trend the series in the top.

With all this hype around the internet, Don’t you wanna know about the show? No matter if you are a fan or a new viewer, you’ll get everything about Ted Lasso’s season 2 here. Keep scrolling to find out about everything.

For people, Football is not a sport but actually a feeling that can only be understood by other players only. I don’t know if you are such a big fan of Football or watch FIFA just to match the hype, but this series is definitely something else. For a football player, it is a must to watch the series and you can’t ever get bored with it.

With tons of jokes related to Football and about the characters of the movie, Ted Lasso is here. Created by Jason Sudeikis, Bill Lawrence, Joe Kelly, and Brendan Hunt for the famous AppleTV+ only. After the first season of the sports comedy-drama relied on the screen, I knew that I had to watch it. Likewise, I have already watched tons of promos and they all look super funny and hilarious. With already much excitement among the football fans, AppleTV+ launched the first season of Ted Lasso in 2020.

Based on the real-life characters of the same name and following the life of NBC sports, The first season shows the hiking ratings among the people. Within a few days, the show became the hot topic of discussion, with people getting crazy over the series.

After Ted Lasso’s Season 1 released its final episode in 2020 within four days, the creator released the official statement. The statement says that Ted Lasso’s season 2 is renewed by the officials. The announcement was released so early but somewhere we knew that it would be happening but this soon? No one knew.

After Ted Lasso’s season, 2 was announced, the audience was curious to see what brings next in the series. The comedy series also got a confirmed release date. It was announced that the series would be available to stream on AppleTV+ on 23 July 2022.

Despite the fact that Ted Lasso’s season 2 was doing great, the recent fan backlash created more chaos among the people. However, nothing really changed among the ratings and viewership of the show. But the backlash made several big problems for the series and also for the cost to have their chance on the award shows. We’ll discuss everything about this Backlash in the next topic. If you don’t know anything about it then take some time to read about it.

Ted Lasso’s season 2 has reportedly become the top viewed series of the year and also become the top-rated as compared to its first season. The series has been gaining positive responses from the fans and the love is immensely there. As season 2 released its more episodes, it was then that a fan took the series and started the backlash.

Although all these things didn’t hurt the show from anywhere from its ratings to viewership, some fans feared that it may take the chances of the Emmy awards. For any TV series, Emmy awards are their top-tiered awards and getting one is itself an achievement. Recently, Emmy Awards have nominated the show for multiple categories with the prominent one being for its main protagonist star Jason Sudeikis.

Some reports say that the series might lose the chances of winning the Emmy Awards because of the fan backlash and even the chances are pretty high. With the lead actor being the major choice among the Emmy nominations, things might have turned down.

This made all the loyal fans of Ted Lasso worried. But another news broke out recently which concluded that a single opinion of the nomination can’t make a big change. Belloni also released a statement referring to the topic and said,

“Lasso is still the front-runner, according to the prognosticators. There’s a growing backlash against the silly and meandering second season of Lasso.”

Ted Lasso’s Season 2: How many episodes are there?

The second season is officially here and it contains 12 episodes in total. The number of episodes has increased by 2 as compared to what we saw in the first season.

The first season of Ted Lasso was released on 14 August 2020 and after that, the second season came in 2022. The second season has a total of 12 episodes with 2 additional episodes.

Coming to the seventh episode, which is the latest upcoming episode of the series.

Over the seasons, the episodes are doing amazingly great and developing into more remarkable themes. It looks like that Ted Lasso’s season 2 is comparatively better than season 1 and the fans are also rejoicing with all the latest jokes that they heard.

Love watching Comedy shows? What is your opinion regarding the popular Brooklyn Nine-Nine? Have you ever heard of this series? If you haven’t then we are so sorry for you. The popular American sitcom has been on Television for the longest. The show has been releasing its episodes since 2013. If you love comedy series then this must be your cup of tea.

Is there any official trailer for the Series?

If you have missed the official video of Ted Lasso’s season 2 then we are here with it. Watch the trailer and find everything about the series with us!