Pope Francis wrote to the Orthodox Patriarch of Moscow, Kirill, and prayed that the Holy Spirit “transform our hearts and make us true peacemakers.”

This is what the Holy Father said in a personal letter that he wrote to the Patriarch of the Russian Orthodox Church on the occasion of the celebration of Easter on Sunday, April 24, according to the Julian calendar.

“Dear brother! May the Holy Spirit transform our hearts and make us true peacemakers, especially for war-torn Ukraine, so that the great Paschal step from death to new life in Christ may be a reality for the Ukrainian people, who longs for a new dawn that will end the darkness of war,” the Pope wrote.

In addition, the Pontiff pointed out that in these days “we feel the full weight of the suffering of our human family, crushed by violence, war and so many injustices” and recalled the sacrifice of Christ on the Cross.

In this line, the Holy Father said that “we will continue to look with a grateful heart that the Lord has taken upon himself all the evil and all the pain of our world.”

“Dear brother! Let us pray for one another to make the testimony of the evangelical message of the risen Christ and of the Church credible as the universal sacrament of salvation, so that all may enter the kingdom of justice, peace and joy in the Holy Spirit”, the Pope encouraged. Francisco.

Finally, the Holy Father congratulated Orthodox Christians for celebrating Easter and told the Patriarch that they remain “united in mutual prayer, we entrust our Churches and all our brothers to the intercession of Mary, Mother of God, who was with her Son in his suffering and in his death and participated in the joy of his resurrection.

Pope Francis and the Patriarch of Moscow and all Russia, Kirill, held a video call in which they discussed the war in Ukraine and issues for “bilateral cooperation” on March 16.

As reported by the Holy See Press Office, “Pope Francis thanked the Patriarch for this meeting, motivated by the desire to point out, as pastors of his people, a path to peace, to pray for the gift of peace, to Let the fire cease.”

Likewise, the Holy Father and Patriarch Kirill agreed that the Church “should not use the language of politics, but that of Jesus” and both highlighted the exceptional importance of the ongoing negotiation process because, the Pope said, “who pays the bill for the war is the people, it is the Russian soldiers and it is the people who are bombed and die”.

“As pastors we have a duty to be close to and help all the people who suffer from war,” the Pope said at the time.

In December 2021, the Holy Father said on the plane back to Rome, after concluding his apostolic journey in Cyprus and Greece, that there was “a meeting with Patriarch Kirill on the not-too-distant horizon.”

However, in a recent interview with the Pope granted to the Argentine newspaper La Nación, he said that the Vatican has suspended a possible second meeting scheduled “for June in Jerusalem” as part of his next trip to Lebanon and explained that “our diplomacy understood that a meeting of the two at this time could lead to much confusion.

Pope meeting with Kirill in 2016

Pope Francis and Patriarch Kirill held a historic meeting in Havana (Cuba) on February 12, 2016.
After the private meeting, the religious leaders signed a declaration and spoke briefly about this important event.

Pope resumed his trip to Mexico, where he remained until February 17. On his official Twitter account @Pontifex_es the Holy Father wrote: “Today is a day of grace. This meeting with Patriarch Kirill is a gift from God. Pray for us.”

Tue Apr 26 , 2022
Every April 26 we remember Saint Rafael Arnaiz Barón, a Spanish religious and ascetic of the “Cistercian Order of the Strict Observance”, a monastic order also known as “la Trapa”. Saint Raphael is considered one of the greatest mystics of the 20th century; His writings are of unusual relevance, guiding […] 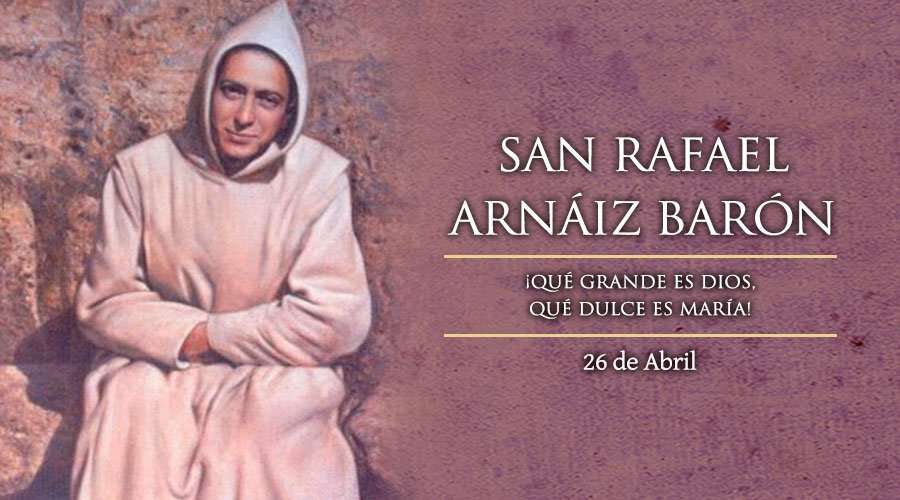