After two years of the pandemic, Catholics in Nicaragua will again go out in procession in honor of Santo Domingo de Guzmán, the greatest promoter of the Holy Rosary, but this time accompanied by the pilgrim image of the Virgin of Fatima.

Santo Domingo de Guzmán is the founder of the Order of Preachers, called “Dominicans”, and was a friend of San Francisco de Asís. The Virgin Mary gave Santo Domingo and taught him to pray the Holy Rosary as a powerful weapon to win souls.

The devotion to San “Minguito”, as they affectionately call it in Nicaragua, is one of the most massive in the country. Although the liturgical feast is August 8, Catholics begin celebrations and processions in his honor on August 1.

The Episcopal Vicar for Pastoral Care of the Archdiocese of Managua and parish priest of the Santo Domingo de Guzmán Parish in Nicaragua, Fr. Boanerges Carballo, said in a video that, for the first time after the pandemic, the traditional and massive procession to Santo Domingo will return to go out into the streets.

“We have lived through difficult times in this health crisis, but we have still celebrated Santo Domingo de Guzmán and we have done it in a creative way. Today we resume the traditional spaces and we are going to walk towards Managua and we are going to do it with the same fervor”, said Fr. Carballo.

Fr. Carballo announced that this year the motto of the celebration is “With Santo Domingo de Guzmán, together with Mary”, because the faithful will be accompanied by the pilgrim image of the Virgin of Fátima, which “has traveled the national territory” for a year and a half.

“This pilgrim image of Our Lady of Fatima, which we have proclaimed as the Mother of Hope, will accompany us in our festivities,” said the priest.

“This year’s logo has integrated a detail of the logo of the National Marian Congress, the nine stars that represent the nine dioceses of our province, because we want to celebrate Santo Domingo with the spirit of Marian love of the Nicaraguan people,” he specified.

Fr. Carballo explained that the motto also seeks to reflect the synod of synodality, in which “in the light of the Holy Spirit, we have lived with a fraternal and friendly spirit, the experience of listening to each other as the people of God and gradually understanding the will of God.” He in the history that we have had to live”.

“The choice to walk together is a prophetic sign for the entire human family that needs a shared project, capable of achieving the good of all together. With Santo Domingo de Guzmán, together with María”, she concluded.

The pilgrim image of the Virgin of Fatima will remain in the country until the National Marian Congress, to be held from August 11 to 15 under the motto “Mary, mother of hope”, and then, in each diocese, a replica of the image will be enthroned .

The Archbishop of Managua (Nicaragua), Cardinal Leopoldo Brenes, also encouraged Catholics to prepare to celebrate this important patronal feast with the recitation of the Holy Rosary, and called for a special request for peace in the country.

Today is the feast of Saint Bridget, Patron Saint of Europe, model of women, wife and mother.

Sat Jul 23 , 2022
Every July 23, the Church celebrates Saint Bridget, Patron Saint of Sweden, founder of the Order of the Most Holy Savior, mother of Saint Catherine of Sweden and, since the eve of the great jubilee of the year 2000, Patron Saint of Europe proclaimed by Pope Saint John. Paul II. […] 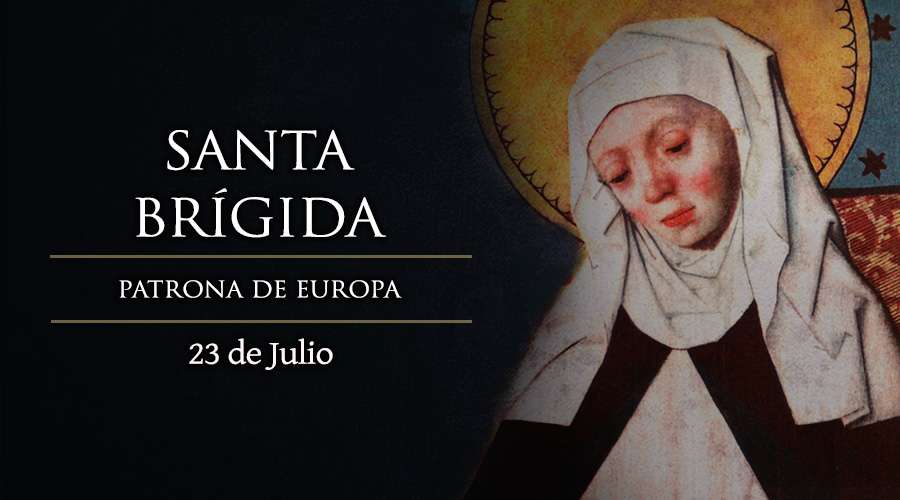