No one doubts that World War II was the greatest horror that humanity has had to face, which on the other hand has a history of shadows that show that although we are capable of the best, we are also capable of committing atrocities. The years advance and all that is left behind, with the risk of forgetting what should never have happened, and it is already known that those who forget their history are condemned to repeat it. 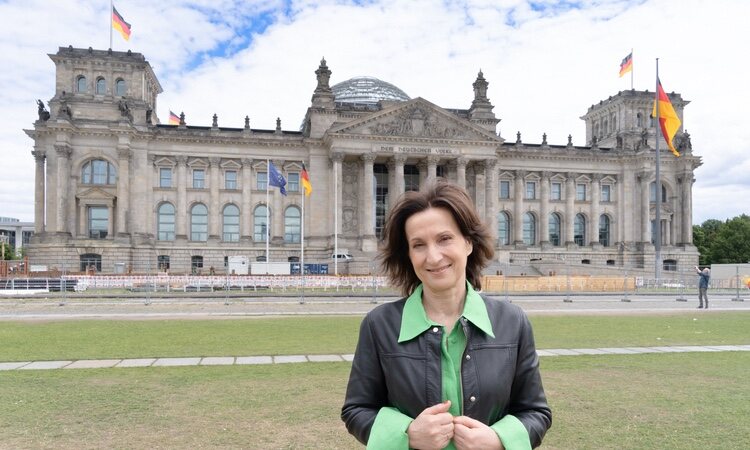 That is why memory is so important, to remember. It can be done when walking through a city that has experienced something as terrible as Berlin, where at every step you find memorials that act as witnesses of that suffering. It can be done by studying and it can be done by reading. And here Paloma Sánchez-Garnica helps us with her book ‘Last days in Berlin’.

The writer was presented for the 2021 Planeta Prize, where she was a finalist with this novel whose protagonist, Yuri Santacruz, takes us through the greatest horrors of the 20th century. Born in tsarist Russia, the Bolshevik Revolution devastates everything he has known and ends up exiled with some of his relatives in Spain, his father’s country, a land they arrived in when they were oblivious to the barbarism that awaited him years later with the Civil War and the Franco regime. Unfortunately, his mother and his brother Kolya stayed in Russia, whom he swore he would see again one day. That took him to Berlin, where he got a job at the Spanish Embassy and thought that from Germany he might be able to get to Russia to get his family back.

What Yuri Santacruz finds is a Berlin that no longer resembled that of those crazy 20s, that despite the hardships after World War I, inflation and the economic crisis was the scene of avant-garde movements and an opening that seemed unthinkable in other European capitals. That Berlin of 1933 saw the rise of Nazism, the ‘enthronement’ of a Hitler whom nothing and no one dared to get ahead of. Hell had settled on earth with the support of some, the indifference of others, the fear of some and the opposition of many others who soon found that Nazism did not tolerate any opposition.

It would have been interesting to have resorted to Moscow with Paloma Sánchez-Garnica, which is also a setting for the novel. Perhaps in another time it would have been possible to walk with the author through the Russian capital feeling like Yuri Santacruz, but certainly not in a 2022 in which Putin invaded Ukraine and started a war in Europe, a terrible conflict that came when the world thought that the weapons were the last thing, that the problems could be solved in another way. Again the human being, or some human beings, opted for the dehumanization that Paloma Sánchez-Garnica exposes so well in her novel.

Paloma Sánchez-Garnica among journalists during a walk through Berlin

It could not have been Moscow, but it was Berlin, a city that has lived a long time and does not forget, a city in which memory is in every corner and that is the result of a history in which the German Empire, the two World Wars, the occupation, the Cold War and the Wall and of course reunification. And there, the guide, Andrés, an Argentine settled in Germany who perfectly understood what Paloma Sánchez-Garnica showed in ‘Last days in Berlin’, accompanied us on a tour that passed through the Reichstag, the Memorial to political opponents, Tiergarten and the Soviet Monument, the Memorial to Homosexual Victims, the Holocaust Memorial, and other places named in the novel.

The walk took us to the Jewish quarter of Berlin, where Paloma Sánchez-Garnica kindly attended us after having passed through the Synagogue and having enjoyed the atmosphere of the Heckmann Höfe. And there, in one of those courtyards, we immersed ourselves in the novel again during a talk that you can see in this video in which the writer expressed that it all started when she started reading to “understand what went wrong so that what happened happened. Understand how German society, similar to ours, allowed itself to be carried away by a patriot like Hitler, by a perverse ideology and why they followed him or kept silent or looked the other way and allowed this man to take power in 1933”. 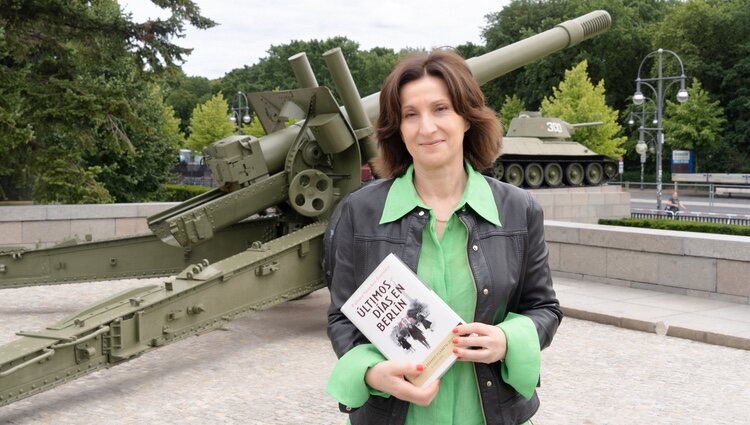 The Planeta Prize 2021 finalist during a tour of Berlin | Photo: Carlos Ruiz Bk

Sánchez-Garnica acknowledges that the basis of writing is reading, perhaps for this reason he had Doctor Zhivago in his memory, a character he turned to for his protagonist, Yuri Santacruz, a man of great values ​​and with integrity and principles that were greater than the fear he might have of retaliation for standing up to the Nazis. But as he pointed out earlier, not only Nazi Germany appears in ‘Last Days in Berlin’, but also Russia, especially Stalinist Russia.

And finally he could not prevent the two totalitarianisms from taking the novel: “When I was trying to understand the rise of Nazism so that humanity could reach the horror of World War II, another reading crossed my mind and I thought ‘I have to tell this’ I was thinking about whether to leave the story in Russia or to set it in Nazi Germany as I had thought, and reading Hannah Arendt I realized that Nazism and Stalinism are a coin with both sides. Stalinism was brutal from the beginning to the end, but in the 1930s there were the purges and in that Stalinist Moscow it seemed to me a good way of counting that two-sided coin that is totalitarianism and that in the end conditioned the lives of millions of people, that caused a lot of suffering, that tormented millions of people. I wanted to equate those two ideologies a little bit.” 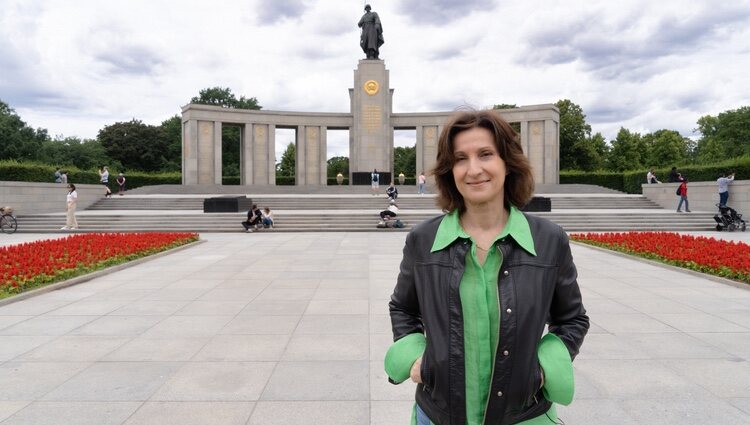 Paloma Sánchez-Garnica therefore equates Nazism and Stalinism without forgetting that “one continues to be condescending towards Bolshevism and Communism. To tell someone that they are a Nazi is to revile them. To say that you are a Stalinist, a communist, a Leninist… there is more condescension” . And of course Putin came out, “a mix between tsarism and that great homeland Russia that wants to be feared by the world again. in it and uses the mechanisms that the secret services used so brutally”. This connection between present and past also brings us back to the novel because “the Russians consider that it was they, in the Great Patriotic War, who put an end to Nazism and that remained with Stalinism and has once again taken up that feeling that Putin has … He wants Russia to be feared again and he wants to expand the territories that he considers to be part of Russia.”

Putin has spoken of denazifying Ukraine, ‘denazifying’, “an attractive word because it means the enemy to beat.” Enemy, another very common word for dictatorships in general and totalitarianism in particular: “Nazism and Stalinism had much in common. Communism is the dictatorship of the proletariat, Nazism is racial supremacy. Both are a single party with thought unique and cult to the leader. With fear, terror as an element of population control and hate speech and the creation of external and internal enemies”, says the author, who points to Jews, communists and opponents in general as the enemies that Nazism sought, while in Stalinism they were the counterrevolutionaries and the aristocrats, as well as of course any opponent”. 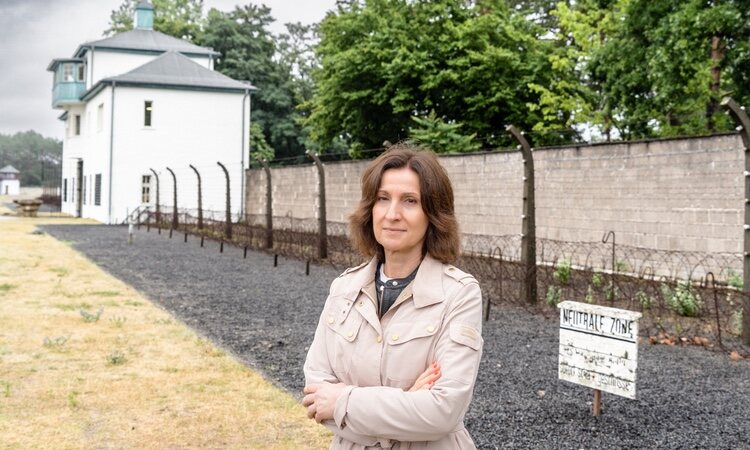 The author of ‘Last days in Berlin’ in the Sachsenhausen concentration camp | Photo: Carlos Ruiz Bk

Those identified as enemies suffered and paid for it even with their own lives and sometimes that of their families as well: “In these systems the dissident is persecuted, but so are their loved ones. It hurts the most. When they go against your family, I swallow my values ​​and I turn my head and follow the herd. That is the problem of totalitarianism, fear, control”. Jews, political opponents and also a group persecuted by the Nazis that was the last to be recognized as such suffered: homosexuals. Gay men were persecuted, marked with a pink triangle, arrested, interned in concentration camps and killed. In his memory, on May 27, 2008, a memorial was opened at one end of the Tiergarten opposite the Holocaust Memorial.

Paloma Sánchez-Garnica did not forget homosexual people in ‘Last Days in Berlin’, and she does not forget that even today we must be alert “to prevent powers from coming that will restrict our freedom again. Or are you with what I establish or you are out and that has serious consequences. What can we do to avoid being a manipulable society? Reading, books. Reading makes us a free society, with criteria, with opinions, difficult to manipulate, that can stand up to a power that wants to crush this rule of law in which we live. Reading teaches us to sift through. Goebbels’s principles are the order of the day, they are not something of the past. It is the basis of manipulation, of propaganda. They are used by all Not just politicians. If we know how to sift the information that comes to us, if we are a society that does not allow ourselves to be programmed by those flashes that appear and are repetitive and that we take as if it were true, they will not be able to manipulate us, we will be able to to act”, adds the writer about a danger that is not a thing of the past. And if anyone doubts the power of books and how they were seen as a threat, do not remember the burning of books on Bebelplatz in which thousands of books burned on May 10, 1933. Among the burned works were those of Heinrich Heine, who precisely wrote in 1817, more than a century before the arrival of Nazism: “Where books are burned, people also end up being burned.” 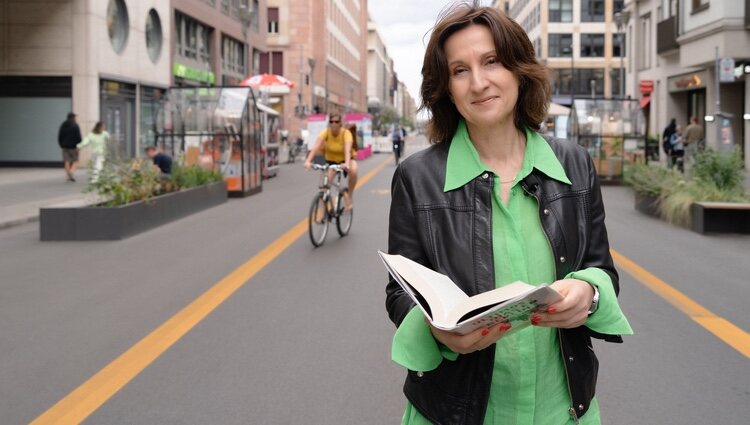 “Totalitarianisms do not announce themselves, they arrive little by little and when you can no longer react and they have power, they sprout and dissidence cannot act because they risk their lives, prison. Fear is installed and the law has bowed, the principles have bowed and you can no longer act. This is what happened in German society, they trusted that Hitler could be the solution and in two months he had absolute power. You have to be alert and protect your rights and know that they can take it away from you All the freedom we have is such a precious asset that we should be constantly alert and we can only fight as a free society, in a society that does not allow us to be manipulated”, concluded the brave author of ‘Last Days in Berlin’.

Chile is sick, laments Archbishop after death of 3 homeless immigrants 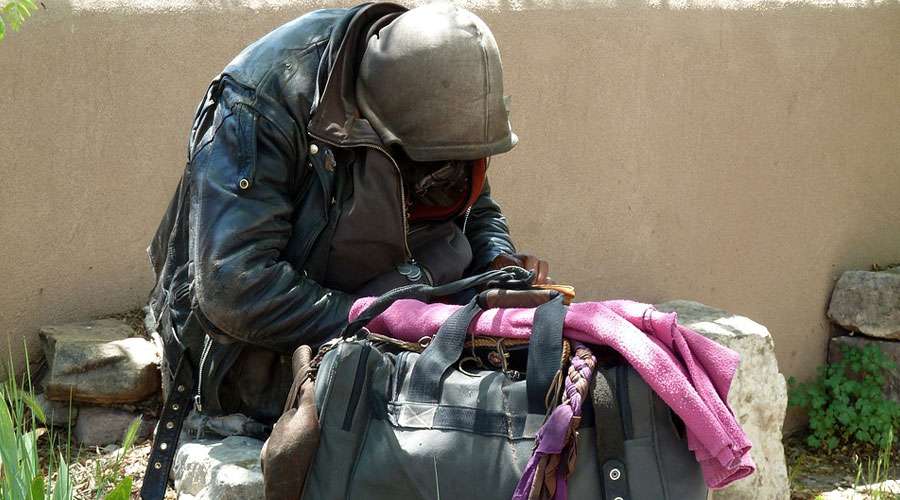