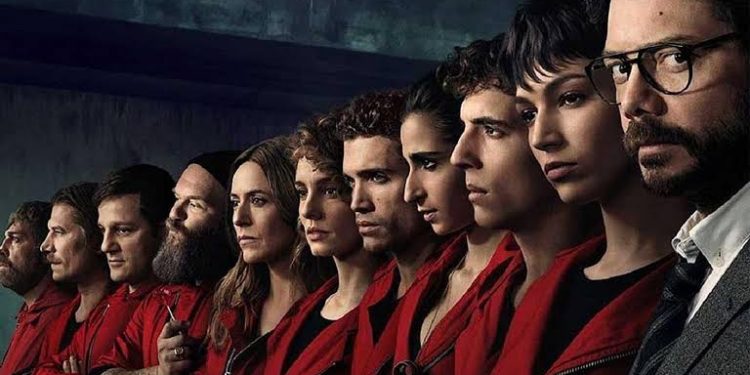 0
SHARES
64
VIEWS
Share on FacebookShare on TwitterShare on WhatsApp

Some shows become instant favorites. Money Heist (La Casa De Papel) is one such show. People expected Season 4 of the Spanish show to wrap up the heist just like Season 2 did. However, things got a lot messier, and Season 4 ended with a cliffhanger. Netflix gave the nod to people’s speculations and confirmed Season 5.

The heist at Bank Of Spain turned out to be a lot bloodier, darker, challenging, and unexpected than the Royal Mint. No one expected to lose Nairobi with such gruesomeness.

While it was a relief to see Lisbon reuniting with the team, the Professor seemed to have only increased his troubles. Sierra is seen to have discovered Professor’s location, holding him at gunpoint.

Netflix has announced that Volume 1 and 2 will release on September 3 and December 3, 2021, respectively.

The original team, at least what’s left of it, will be back. Following cast members are set to return:

Miguel Ángel Silvestre and Patrick Criado will join the franchise too.

Creator Álex Pina described Season 5 as one with “destruction.” The characters will have to fight to survive, all codes and ethics will go down the drain.

Pedro Alonso said it would be like “a war movie but within four walls.” Therefore it’s evident that blood will be shed and hearts will be broken.

Money Heist Season 5 is one of the most awaited installments of the year. Fans can’t wait to scream “Bella Ciao” as they see their beloved characters (and hated Arturo) once again in action.