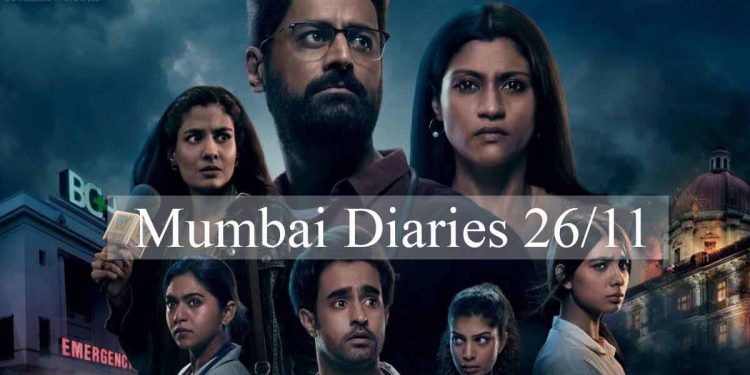 Terrorist And Terrorism are a big threat to a country and also to the people living within it. India, being the major country countered by many other nations often faces these kinds of terrorist attacks. 26/11 is a much bigger incident that took place in the year 2008 in the big crowded city of Mumbai. The attack was so drastic that people still fear what happened on that day. Based on the same incident Mumbai Diaries 26/11 has been announced.

The 26/11 incident broke out in the year 2008 in the chill time of November. 10 members of Lashkar-e-Taiba, an Islamist group of the terrorist organization from  Pakistan, perform 12 coordinated shooting and also bombing attacks that go on for four days in Mumbai.

We have already known that the conditions and relationship between India and Pakistan is not the healthiest and even though the Indian government tried their best to be on the good side, these terrorists don’t think of anything.

Based on the relation, we have our Shershaah movie released last month and it drew all the attention of the people towards it. The movie became the top-grossed and top-rated movie of the year, receiving the nation’s attention to what happened in the Kargil war.

While Shershaah showed about the dedication of an Indian Army Soldier and what it takes to be in the frontline of war, Mumbai Diaries 26/11 will tell you about the life of Doctors. Here is every single detail about the upcoming series in detail. Keep reading to get yourself all the information.

Mumbai Diaries 26/11 follows the 2008 terrorist attack that took place in Mumbai by the Pakistani organization. The latest web series Mumbai Diaries 26/11 is based on the same 2008 incident and explains what happened that year and how people overcome the situation.

The Indian cinemas have already used the 26/11 incident more than 100 times as a way of their story and I wouldn’t be surprised if the audience wasn’t attracted to this series at the time.

If the plot and casting perforation go well, the series will definitely be a blockbuster hit.

Furthermore, Mumbai Diaries 26/11 is a Medical thriller series that revolves around the Doctors of a Medical Hospital And their fears and responsibility to overcome the deadliest attack.

Starring  Konkona Sen Sharma, Mohit Raina, Tina Desai, Shreya Dhanwanthary, and others as the main lead of the series, we would definitely be going to see a lot of new things within the movie. As these actors are already famous for their world-class acting, I really hope that the upcoming series will have a big impact upon the people.

Another famous series is here with its Season 2. The Family Man became the top viewed series in the OTT platform of Amazon Prime. Recently the second season of this movie has been released and the audience was excited to see everything about it. Read this article to find out about the series.

Mumbai Diaries 26/11 Release Date: When it is Going to be Release?

After the news was released, the officials were asked about the release date. Amazon Prime’s exclusive web series has just released its official trailer on the internet and the audience was overwhelmed with it.

With a new trailer, it brings a new set of questions about the series and one of the prominent ones being its release date. The medical thriller series has already been announced and its trailer is already aired on Youtube. This concludes that the movie is soon going to be on the screen.

The new medical web series is different from the other movies that are based on the attack. Mumbai Diaries 26/11 follows the doctors who act as frontline and help the people to overcome their health. In the attack, 124 people died and more than 300 people were wounded.

This movie shows how the doctors and the medical staff kept their fear aside and helped these innocent lives to overcome their drowning condition.

In a talk with the director, he said,  “Mumbai Diaries 26/11 offers a different perspective to the dreadful night of 26/11 which hasn’t been explored on-screen so far.”

Nikhil Advani also said that “A tribute to the bravery of the frontline workers and the unsung heroes, the series offers a perfect blend of emotions and drama through a versatile ensemble of actors who have put in their heart and soul to bring this story to life. Narrated from the lens of the first responders i.e., doctors, nurses, interns, and ward boys, the show transports the viewers into the corridors of the Bombay General Hospital, unfolding what transpired there on that fateful night.”

It is a series we are immensely proud of and we are honored to have the Honourable Minister of Environment, Tourism & Protocol, Government of Maharashtra, Shri Aaditya Thackeray grace the trailer launch of the show. With Amazon Prime Video we will be able to take this story across the world and at a time when frontline workers need to be lauded for their efforts. I couldn’t have asked for a better home or time for the series.”

Is there any official Trailer for the Series?

Bitcoin Champion Review 2022: Does It Allow Traders To Succeed In The Crypto Market?