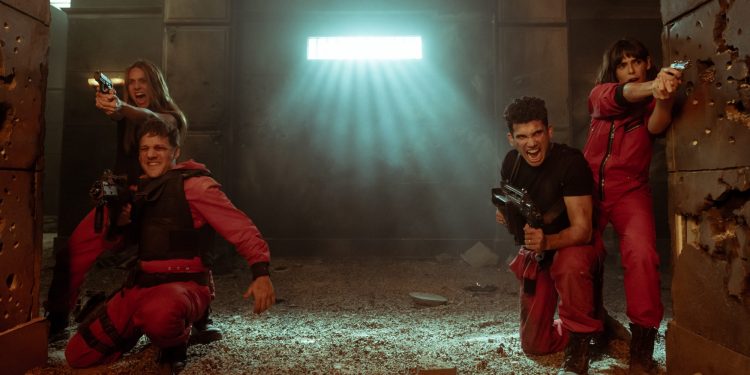 Happy Labor Day weekend 2022! As the summer winds down and we head into fall, Netflix has a great month planned with some big shows, movies, Netflix originals, and more on the way.

If that’s not what you’re looking for, we highly recommend some of these good Netflix shows this weekend. Overall, the Netflix Top 10 hasn’t changed much over the last week. Clickbait, Manifest, Outer Banks and The Chair are still going strong.

The fifth and final season of Money Heist is now available on Netflix. The Spanish original series is also known as La Casa de Papel and is one of Netflix’s most popular show. The final season has been split into two parts, and the second part will be released later this year.

In the series, a criminal mastermind known as The Professor gathers a group of thieves to lock themselves in the Royal Mint of Spain. They take hostages while the Professor manipulates law enforcement to do his bidding as they carry out his master plan.

How to be a Cowboy

Who is Dale Brisby? Well, he is a true cowboy who will bring you along on a wild ride and teach you How to be a Cowboy, his new series.

Brisby’s fame started with his YouTube page Rodeo Time where he shares all of his bull riding adventures. The series is meant to keep cowboy traditions alive, and Brisby is joined by Leroy; an intern, Joe; and a girl Brisby says is more cowboy than any of the men.

If being a cowboy is something that appeals to you, check this one out as you will learn many cowboy tricks and Brisby’s famous catchphrases as well.

The sixth and final season of Lucifer will premiere on Netflix on Friday, Sept. 10, so it’s time to binge the first five seasons before that.

Tom Ellis plays the devil in this wildly popular detective series. Lucifer Morningstar decides it would be better to live in LA than in hell. He runs a nightclub and then becomes a consultant to the LAPD. Besides the fact that Lucifer is charming and irresistible, the series is a police procedural show. How can you beat that combo? And, that’s not to mention the amazing women on the series who are badasses!

The series ran on Fox for its first three seasons, then was picked up by Netflix for the remaining three seasons. Fans love this series and hate to see it enter its final episodes.

Man with a Plan

Sadly, many shows will leave Netflix as time goes on, and most CBS series leave within one year of release on the streamer. One of the shows that will be leaving at the end of September is Man with a Plan. Although critics have been harsh on this series, fans have really enjoyed it.

The series star Matt LeBlanc as Adam Burns, an old-school father who takes on more responsibilities around the home when his wife returns to work. The couple has three children who give Adam a run for his money as he tries to balance home and work life. He runs a construction business with his brother and overbearing father.

Better watch it while you can. Man with a Plan leaves Netflix on September 30.

Another series that could be leaving Netflix is Reign. This historical romantic drama consists of four seasons, all available to stream, but it will be leaving the streamer next year. So, you have plenty of time to watch this one.

Reign is a series that tells the tale of Mary, Queen of Scots, and her rise to power in the French court. Although the historical storyline of the series has its inaccuracies, the series is very well done. It is a modern-ish take in a historical setting, and the costumes are incredible. The series is very much a teen drama and will remind you a bit of Gossip Girl.

What are you watching on Netflix this weekend?