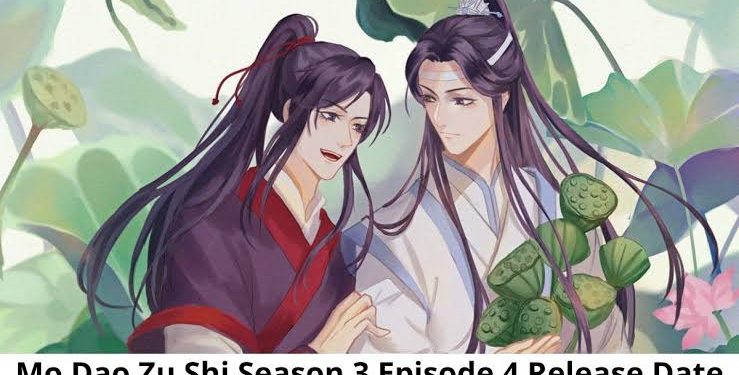 “Mo Dao Zu Shi” aka “The Founder of Diabolism” or “Mo Dao Zu Shi: Wanjie Pian” is a xianxia action-adventure donghua series that is based on the titular novel written by Mo Xiang Tong Xiu. The story centers on Wei Wuxian, who is the inventor of Demonic Cultivation and a former Yunmeng Jiang Clan disciple. He was slain 13 years ago during the First Siege of the Burial Mounds.

Wei Wuxian then returns to the mortal realm and reunites with his companion Lan Wangji thanks to a sacrificial rite that was performed by Mo Xuanyu. On 9 July 2018, the donghua made its debut. On 7 August 2022, the 3rd season of Mo Dao Zu Shi premiered. If you’re curious about what to expect in the next episode of the series, we’ve got you covered.

The 4th episode of Mo Dao Zu Shi’s (also known as “The Founder of Diabolism: Final Season”) 3rd season will air on Tencent Video on 28 August 2022. The series has been created by Studio B.CMAY PICTURES, whereas it has been produced by Tencent Penguin Pictures. Tencent Video is showing the 3rd season for the viewers in China and a few other Asian countries. Whereas for the international viewers, the episodes have been made available on WeTV.

The entire number of episodes for the show is unknown at this time, but we expect it to continue for at least four more episodes. So, until then, we can look forward to a new edition of the show every Saturday following the third round. We might not be through with the Yi City Arc just yet. Below you’ll find the trailer as well as our predictions for the next episode.

At the time, Mo Dao Zu Shi’s 4th episode of the 3rd season appears to be a fresh start for Yi City. At least, that’s what the defeat of Yang in the previous episode of Mo Dao Zu Shi suggested. For a reason, the arc is known as Yi City Arc. Yang did not die, and he was rescued at the last possible minute. As a result, we should anticipate reprisal.

One of the juniors protests in the 3rd episode dubbed “The Dream,” that only 13 suppression charms will not stop Xue Yang. Empathy is used by Wei Wuxian and Lan Wangji to peek into A-memories. Qing’s Xiao Xingchen is seen ministering to Xue Yang’s injuries. A-Qing, who can see, warns Xiao Xingchen about Xue Yan, but Xiao Xingchen promises her that once he is recovered, Xue Yan will depart.

A-Qing and Xiao Xingchen become more relaxed around him as they become accustomed to his company. Wei Wuxian and Lan Wangji eventually battle and kill Xue Yan, but the Gravedigger appears and steals Xue Yan’s body using a Transportation Talisman.

Song Lan, who is now a sentient furious corpse, is subsequently given Xiao Xingchen’s sword and two Spirit-Trapping Bags containing bits of Xiao Xingchen and A-shattered Qing’s souls. When the situation of Yi City is resolved in the 4th episode, Wei Wuxian and the others may depart the city. Wei Wuxian might finally kiss Lan Wangji while staying at an inn. Later, the gang would meet up with Lan Xichen at Tanzhou.

Never Have I Ever Season 3 Release Date, Cast & Every Important Update