Frantic minutes have been lived in ‘Viva la vida’ this Sunday, April 24. A few minutes before the images of Antonio David Flores and Olga Moreno are broadcast together in Malaga, Marta Riesco has been involved in a new controversy that she has tried to cut to the chase. According to Avilés, this she would have granted an interview speaking ill of the former Civil Guard before resuming their relationship, something that seems to have nothing to do with the relationship.

“When Marta finds out, she’s not going to be amused,” Avilés warned before releasing the bombshell. And he was not wrong: “There has been a solo posing for a magazine putting David as the rags saying that he did not agree with certain attitudes since they broke up until the date of that posing. Antonio David Flores finds out about this, he comes to Madrid to try to neutralize Marta and stop talking about the way she is going”. 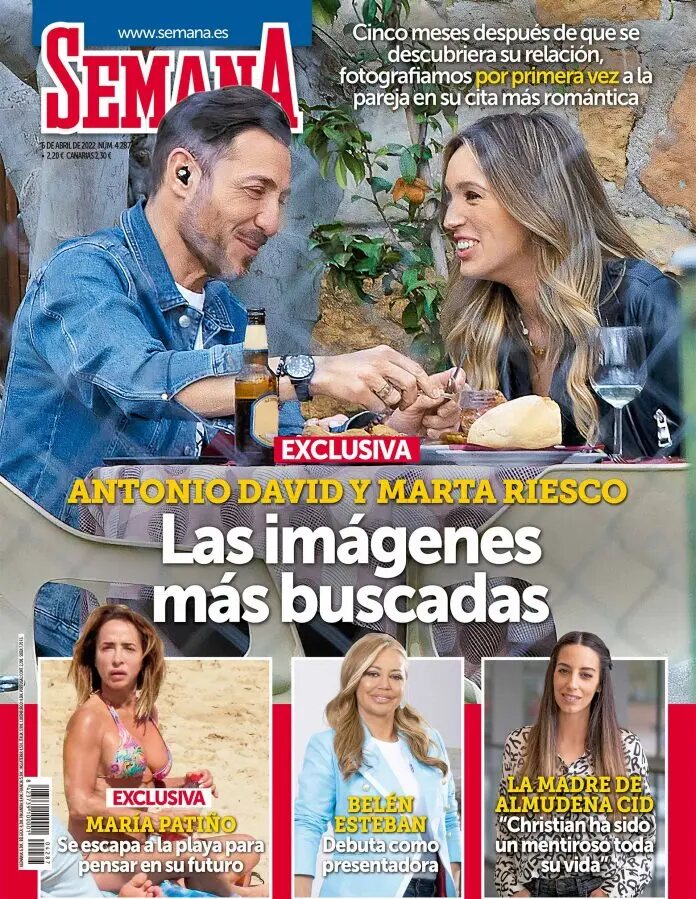 The first inn of Antonio David and Marta Riesco, in the magazine Semana

The collaborator insists that the previous day Diego Arrabal had already given part of that information, assuring that Marta Riesco had posed for a publication. “It comes to me from very good sources,” the paparazzi acknowledged, although he did not hesitate to deny the information he himself had given when he acknowledged that the reporter had contacted him to deny it.

But Avilés had not yet given time to finish speaking when Marta Riesco had already contacted several collaborators of the program. Specifically with Marisa Martín-Blázquez, to whom she sent a message denying the information; and Isabel Rábago, whom she even reached, she even called directly so that she could transfer some information to José Antonio Avilés.

“Marta has told me that she gives you two seconds to deny all the information, otherwise she is going to take you in front of a judge. There is no posing, no photo has been taken, she has not given any interview against Antonio David and you gives you the option as a partner to rectify that information”, was the message transferred with the warning of the reporter of ‘The Ana Rosa program’.

A few words that did not intimidate the former contestant on ‘Survivors’, who sent a message directly to Marta Riesco, aware that she is watching the program: “I thank Marta for giving me that opportunity. It is information that It comes to me and I think that nothing I am telling is criminal nor is it a reason to sue because I am not damaging your honor. You are not in accordance with the information that I am giving and do what you think appropriate and where I will have to defend myself, I will “, and added:” She has asked that the interview not see the light.