Kanye West returned this Monday, March 14, to his social networks ready to turn his family upside down. Kim Kardashian has already ceased to be West after a judge declared her legally single and she has celebrated it by confirming her romantic relationship with Pete Davidson through social networks, so the rapper seems to have nothing to lose. For this, the designer also uploaded a new video to his social networks denouncing -again- that his already ex-wife did not let him see his children as much as he would like and that this made it very difficult to have 50/50 custody .

“I just got off the phone with Kim and told her to stop being mad about this whole TikTok thing. I said ‘never again.’ does not allow TikTok to use my daughter, Disney to use her. I have something to say, “the rapper was heard speaking to the camera and very angry: “There is no 50/50 custody in today’s society. It always leans towards the mother”.

Ye thus denounced that his ex-wife did not make it easy for him to be with his children and that he always found some obstacle not to comply with that custody: “I got a flight for all my children to come from Calabasas to Miami for the launch of ‘Donda 2’. When the plane took off, I got a text from Kim to say, ‘North’s not on the plane,'” he said, comparing it to the time he wasn’t invited to his Chicago birthday – or so he said – and then he was there with the whole family.

The first that West raised this issue publicly through his social networks, Kim Kardashian had already responded through an official statement, the first he had done since the divorce was announced, and with which he seemed to try to settle all the controversy: “As a father [de la familia] who is the main provider and caretaker of our children I am doing everything possible to protect our daughter and at the same time allow her to express her creativity in the medium that she wants with the supervision of an adult, because it brings her happiness, “Kim said of the use of Tik Tok.

Kim assures that it is a lie

Now, after doing it for good on several occasions, so that the businesswoman is no longer in the mood to continue enduring so many public scandals and has also decided to respond publicly. He did so in Kanye West’s latest post, which was a photo of North’s backpack showing three pins, two with his parents’ faces and one with an alien, and the rapper wrote: “This was in my daughter’s backpack when I was ‘allowed’ to see her last week. This is why I’m so invested in everything in my family and so focused on protecting everything and everything. As the pastor of my home. Don’t worry, Northy, God is still alive.” 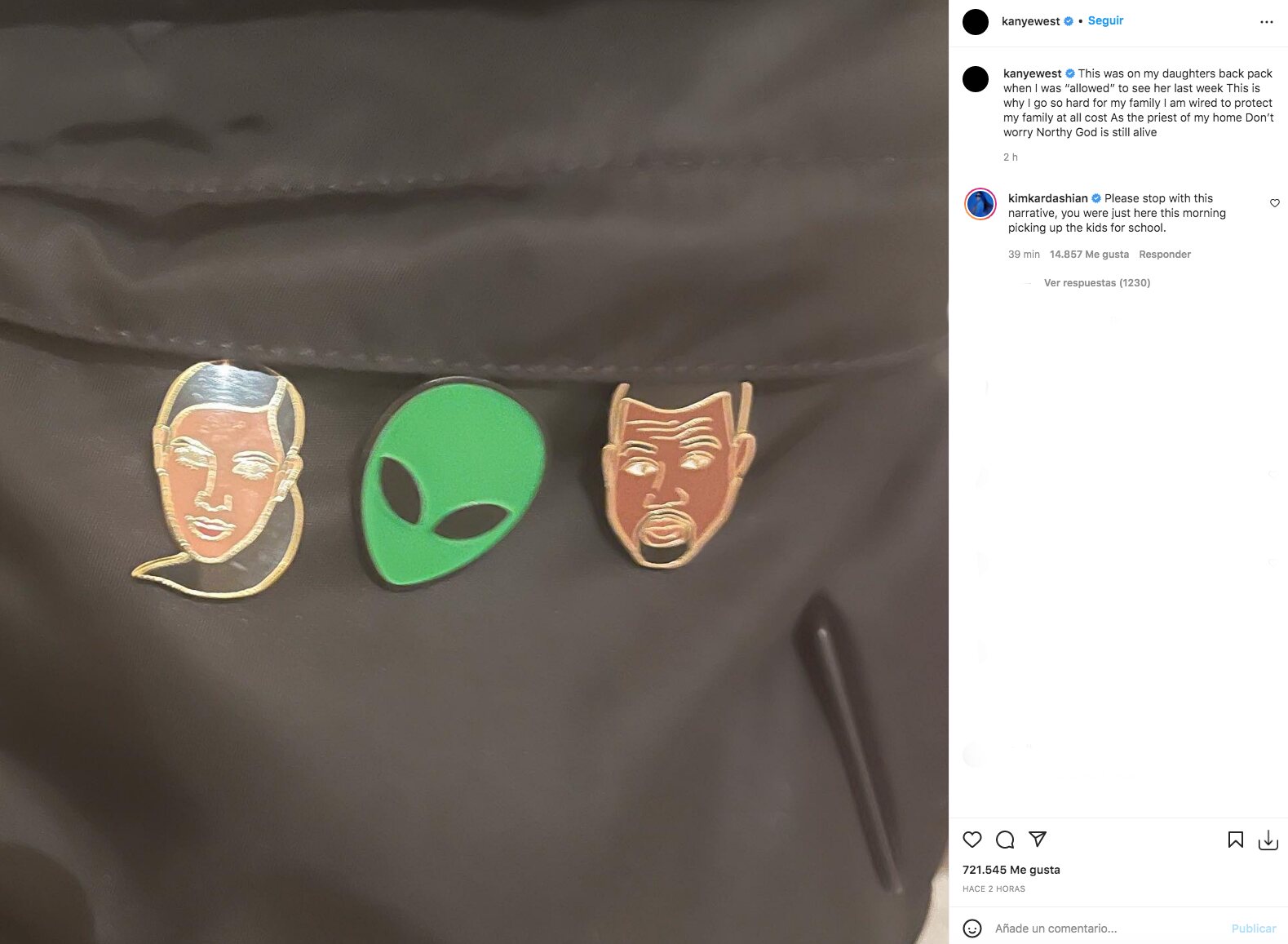 A few words that Kim Kardashian is not convinced in the least and that do not seem to be very consistent with reality. So, neither short nor lazy, she decided to respond in the comments in a very clear and concise way: “Please, stop with this story. You were here this morning to pick up the children and take them to school”, I was waiting for him showing that, indeed, the rapper had been with his children a few hours ago, not a week ago, which would also show that it is not so difficult to see them or spend time with them.