After several weeks of coexistence, in ‘Survivors 2022’ any excuse is valid for the contestants to discuss. One of the toughest confrontations that have been experienced in recent days, and possibly in the entire edition, was played by Kiko Matamoros, Nacho Palau and Anuar Beno. Despite the fact that at the beginning of the reality show the collaborator of ‘Sálvame’ had a good relationship with Isa Pantoja’s brother-in-law, their relationship has been completely broken for weeks, and this has been evident in the discussion they have had and in which it has also Miguel Bosé’s ex-husband participated, a party involved in the cause that has led to the conflict.

It all started when Anuar referred to Nacho as ‘don cocos’. As the contestant explained in the palapa, “he spent the whole night picking coconuts, that’s why I called him don cocos, because he couldn’t sleep.” To this was added that, as could be seen in the images, Asraf Beno’s brother also accused his partner of hiding the shampoo they have, when it was clearly seen that it was not true. All this caused Kiko Matamoros to confront the contestant, tired of his disrespect, despite the fact that he tried to hide behind the fact that it was all a joke.

“Run, run, you are not seeing the shampoo hide, Mr. Coconuts, Mr. Coconuts,” were Anuar’s words with which the tremendous anger began in the Royales group. After that, Nacho, for whom they were directed, accused him of being a provocateur. It was then the turn of Kiko Matamoros, who addressed the young man in the group to announce that if he continued down this path “we’re going to finish the hell out, we’re going to come to blows, once and for all”. Isa Pantoja’s brother-in-law took advantage of those unfortunate words so that they would turn even more against the collaborator, who wanted to clarify that with that provocative attitude is what he will end up achieving. 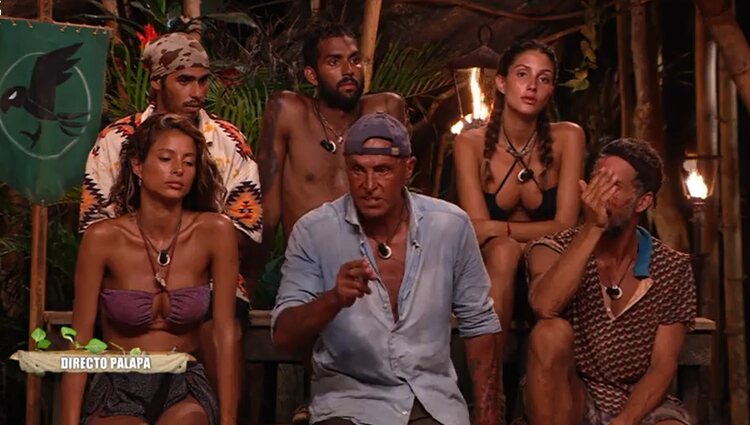 The fight between Anuar, Kiko and Nacho moved from the beach to the Palapa | Source: telecinco.es

After viewing the video, Jorge Javier Vázquez was interested in the brawl, giving the three protagonists the opportunity to explain themselves. “You have as little grace as you have little education, this is a continuum, one hour, another hour, another hour… What I said is that in the end you are going to cause us to come to blows. You are crossing a very dangerous line when you told us that you were waiting for us outside. We did not say that we were going to attack you or that we wanted to come to blows,” the ‘Sálvame’ collaborator clarified again.

For his part, Nacho Palau wanted to apologize for the insults, as he recalled that he is not the example he wants to instill in his children, but acknowledged that he had been very comfortable not taking the situation any longer. In addition, the survivor took the opportunity to remember that Anuar “already has a history of insulting contestants in this edition, failed Juan or old skin Ana”. At the moment, the waters seem to have calmed down between the three, but it is a matter of time before the sparks jump again.

Today we commemorate Saint Charles Lwanga and fellow martyrs of Uganda, "the martyrs of purity"

Fri Jun 3 , 2022
Today, June 3, the Catholic Church commemorates the Ugandan Christians who were tortured and executed on the orders of King Mwanga between 1885 and 1887. The group of martyrs is headed by Saint Charles Lwanga who, together with his 21 companions, he gave his life for refusing to participate in […]