The Supreme Court of the United States granted a man sentenced to death the possibility of receiving spiritual assistance from his pastor during his execution.

On March 24, after a vote of 8 to 1, the United States Supreme Court ruled in favor of the request of John Henry Ramírez, a prisoner identified as a Christian who was sentenced to death in Ramirez v. Collier.

Ramírez requested that his pastor, Dana Moore, of the Second Baptist Church in Corpus Christi, Texas, “lay hands” on him and pray aloud as he receives the lethal injection.

At first, the justice system denied Ramírez that his religious leader could approach him during his execution, but after a legal battle led by the Becket law firm, dedicated to religious freedom, Ramírez will be able to receive spiritual assistance.

Becket filed an amicus curiae brief in which he argued that the Texas Department of Criminal Justice (TDCJ) should allow prisoners the right to meaningful clergy access in their last moments of life.

John Ramírez was sentenced to death by a Texas judge after the 2004 murder of Pablo Castro, a father of nine children and a convenience store worker. Ramírez stabbed Castro 29 times during a robbery in which he and his accomplices stole $1.25 from the victim’s pockets, then left him to bleed to death in a parking lot.

Although the death sentence was due to be carried out in September 2021, it was postponed after the prisoner requested that pastor Dana Moore be present at his execution. Although Texas initially denied his request, it later changed its protocol and allowed him to do so.

Later, Ramírez requested that his pastor also “lay hands on him” and pray with him as he died. Because Texas denied his request in July, the prisoner turned to the Supreme Court for support and obtained his intervention.

The Court agreed to hear Ramírez’s case just hours before he was scheduled to be executed. The hearing where the oral arguments were presented was held on November 9, 2021.

Judge Clarence Thomas accused the Supreme Court of, among other things, awarding “equitable relief for a demonstrably abusive and insincere claim brought by an inmate with an established history of seeking unwarranted delay, harming the State and Ramírez’s victims in the process.” process”.

In the Supreme Court document announcing its decision on the case, most of the justices noted that “the question is whether the execution of Ramírez without the requested participation of his pastor should be stopped, pending full consideration of his claims.” in a complete record.

“The parties agree that the relief requested is properly characterized as an injunction. In such circumstances, the party seeking relief ‘must establish that it is likely to succeed on the merits, that it is likely to suffer irreparable harm in the absence of preliminary relief, that the balance of values ​​is tipped in its favour, and that a precautionary measure is in the public interest,” he added.

In addition, he noted that Ramírez “will probably prevail on the merits of his RLUIPA claims. [Ley de Personas Institucionalizadas y Uso de Tierras Religiosas de 2000]and that the other preliminary factors of the judicial order justify the reparation”.

The RLUIPA “provides that ‘no government shall impose a substantial burden on the religious exercise of a person residing or confined in an institution’-including state prisoners-even if the burden results from a rule of general applicability, unless the government shows that the imposition of the burden on that person is to promote a compelling government interest; and is the least restrictive means of promoting that compelling governmental interest,’” the Court wrote.

Becket welcomed the Court’s decision, saying that they cited extensively from his amicus curiae brief to explain the “rich history of clerical prayer at the time of a prisoner’s execution, dating back long before the founding of our nation.”

Eric Rassbach, Becket’s vice president and lead attorney, said in a statement that “even the damned have a right to be right with God.”

“The Supreme Court correctly recognized that allowing clergy to minister to the condemned in their final moments sits squarely within a history that stretches back to George Washington and before. That tradition matters,” he concluded.

Sat Mar 26 , 2022
Today, March 26, we remember Saint Ludgero, the great missionary of Europe in the Middle Ages. He is known as the great evangelizer of the Frisian (Netherlands) and Saxon (Germany) peoples; he was the founder of Werden Abbey and the first bishop of Münster, Westphalia (Germany). His life was characterized […] 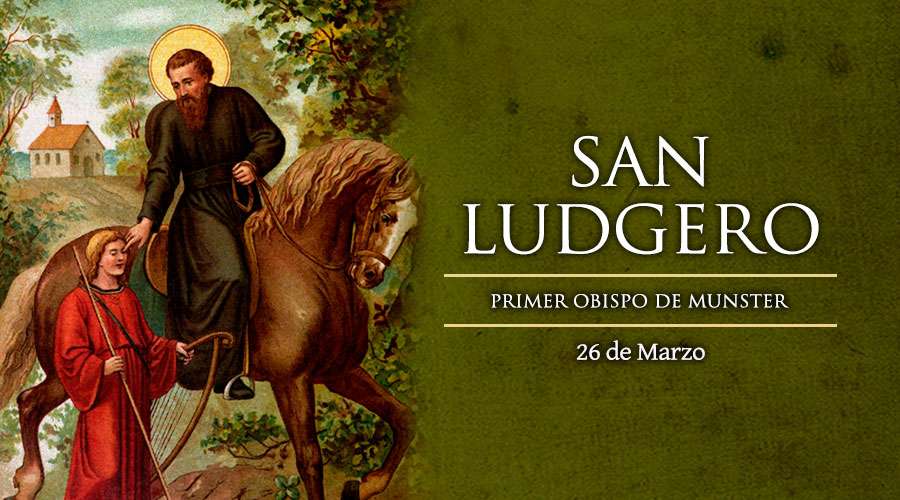