Although many have practically forgotten about Covid-19, we really still live in a pandemic that continues to cause many people when they get infected to be forced to stay home and not be able to go to work. This was the case with Jorge Javier Vázquez, who had to cancel his schedule on Telecinco and hand over the baton to other colleagues in the editions of ‘Sálvame’, in ‘Deluxe’, the ‘Mediafest’ and, of course, ‘Survivors 2022’ . The reality show is the star product of the network this season, the format that works best for its audiences, being presented by it the main gala of the contest every Thursday.

During Jorge Javier’s absence, Carlos Sobera replaced him in ‘Survivors 2022’, doing a double with ‘Tierra de nada’. Although the Catalan was discharged after overcoming the disease, viewers witnessed that he had some sequels, especially in his voice. The presenter’s tone was very serious and from time to time he coughed, so, by medical prescription, and as he himself announced on his social networks, he had to unsubscribe again for two weeks. However, he revealed that he would return to present the final stretch of the reality show. 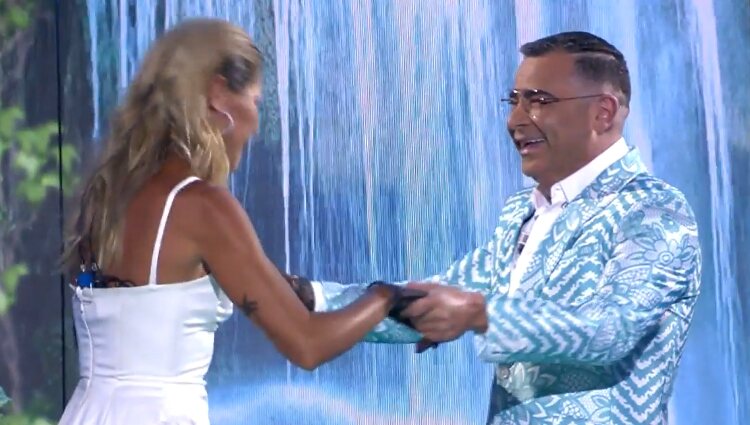 After receiving a visit from Rocío Carrasco and sharing a photo on his social networks with her, Jorge Javier took the opportunity to discover that he was returning to Telecinco to present the fourteenth ‘Survivors 2022’ gala, which was broadcast on Thursday, July 21. The driver was effusively received by the public gathered on the set, although there was one person who was especially happy, Ana Luque. The last expelled from the contest has maintained a great harmony with him since the edition began, so no one was surprised by the hug they gave each other.

Will Jorge Javier meet Olga Moreno in the final?

The relationship that Jorge Javier maintains with Olga Morena’s friend is especially surprising, since the winner of ‘Survivors 2022’ does not have a good relationship with the presenter after his strong position in his war against Rocío Carrasco. The one from Badalona already warned that he had no intention of stopping presenting the final, despite the fact that Olga had vetoed him, so it remains to be seen if Antonio David Flores’s ex will come to present the prize to the winner of the current edition.

At the time it was announced that Jorge Javier would have to be out for two more weeks due to the consequences of Covid-19, many followers of the program began to speculate that he would not be able to lead the final of ‘Survivors 2022’ and, therefore, there would be no meeting with Olga. However, the Catalan made it clear on his Twitter account that he would be in the final, as he had promised.

Fri Jul 22 , 2022
Carlos Lozano has returned to the set after ending his tour of the Spanish beaches in ‘Sálvame Sandía’ and his presence has already been more than enough to star in a strong row with one of his companions, Rafa Mora. The thing was escalating until both ended up dedicating unseemly […]