The 2023 edition of WYD will be held in Lisbon, Portugal, from August 1 to 6and is expected to bring together hundreds of thousands of young Catholics.

In a statement released on May 18, Cardinal Clemente recalled that “the patron saint par excellence of the next World Youth Day is the virgin marythe young woman who agreed to be the mother of the incarnate Son of God”.

“She, who got up and hastened to the mountain, to meet her cousin Elizabeth, bringing her the Jesus she had conceived. In this way, she teaches young people of every time and place to bring Jesus to others who await Him, both now and then! ”, She assured.

Later, the Portuguese Cardinal indicated that “Saint John Paul II is also pattern. We owe him the initiative of the Conference, in which millions of young people from the five continents have gathered and encouraged.

The Cardinal stressed that “the patron saints are all those who have dedicated themselves to the service of youth, especially Saint John Boscowhom Saint John Paul II declared ‘Father and Teacher of the Youth’”.

“We also have the protection of Saint Vincent, deacon and martyr of the fourth century. He, as patron saint of the diocese, will welcome and strengthen everyone with his charity and evangelical witness”, he assured.

The Patriarch of Lisbon then said that when it is celebrated in the Portuguese capital, “the Day will have the heavenly support of some Lisbon saints, who left here to announce Christ.”

“For example, Saint Anthony – born around 1190 – that as a Franciscan he would first go to Morocco, then to Italy and then to the south of France and then return to Italy, converting many people to the Gospel that he lived and preached”, he said, recalling that “Pope Leo XIII called ‘the saint of all the world’”.

“Centuries later, Saint Bartholomew of the MartyrsDominican and Archbishop of Braga, was also from Lisbon”, he pointed out, who “wanted to reform the Church by bringing the shepherds closer to the sheep, as the Gospel demands and as Pope Francis insists so much”.

The Patriarch of Lisbon pointed out that “a century later, another young man from Lisbon, Saint John of Brito, Jesuit, went to India to announce Christ. Unstoppable in his proclamation and in his difficult journeys, he dressed and spoke thinking of reaching all groups and social classes. He was martyred at Oriur, in 1693”.

Among the blessed patrons born in Lisbon, the Cardinal pointed to “Joana from Portugal, daughter of King Alfonso V, who could have been queen of several European kingdoms, but preferred to be united to Christ and his Passion, leaving the cloister at the age of nineteen. She died in Aveiro, in the convent of the Dominican nuns, in 1490”.

“We call her Santa Juana la Princesa and she drives us to make radical decisions,” he said.

Cardinal Clemente later highlighted the blessed Jesuit Joao Fernandeswho in 1570 “was martyred off the coast of the Canary Islands, when he was on his way to Brazil on a mission.”

“Later, Maria Clara of the Child Jesus – a young aristocrat born on the outskirts of the capital – was orphaned very early, but decided to become a ‘mother’ of the destitute”, she recalled.

The Cardinal recalled other young people “from other origins, but from the same Kingdom”, among them “Blessed Peter George Frassati who, until his death in Turin in 1925 at the age of 24, moved everyone with the dynamism, joy and charity with which he lived the Gospel, both climbing the Alps and serving the poor”.

“With the same youth and generosity we have Blessed Marcel Calloborn in Rennes and who died in the Mauthausen concentration camp in 1945”, he pointed out.

Cardinal Clemente later pointed out that “with Christ abandoned on the cross, blessed Chiara Badanoa young focolarina, when at the age of 16 she was struck by an illness”.

“She died two years later, in 1990, always radiating a luminous joy that confirmed the name ‘Luce’ given to her by Chiara Lubich”, founder of the Focolare Movement.

“The following year, 1991, Blessed Carlo Acutiswho died of leukemia in Monza at the age of 15,” he said.

“His short life was filled with great devotion to Mary and the Eucharist, which his computer skills allowed him to spread, even during his illness. He made his suffering an offering and left happy, ”he assured.

“Each one in his time, the Patrons of WYD Lisbon 2023 have shown that the life of Christ fills and saves young people of all times. We count on them, we leave with them!”, highlighted the Cardinal.

In addition to these patrons, the organizers indicated, WYD Lisbon 2023 is also entrusted to the patrons that each diocese of Portugal has chosen as “reference for each diocesan reality”.

Today Saint Mary Bütler is celebrated, a nun who left the convent to become a missionary

Thu May 19 , 2022
Every May 19, the Church celebrates Saint Mary Bernarda Bütler, founder of the Franciscan Missionaries of Mary Help of Christians; religious and missionary who sanctified herself in the evangelizing service of the abandoned towns of South America. Her own words portray her well: “Open your houses to help the poor […] 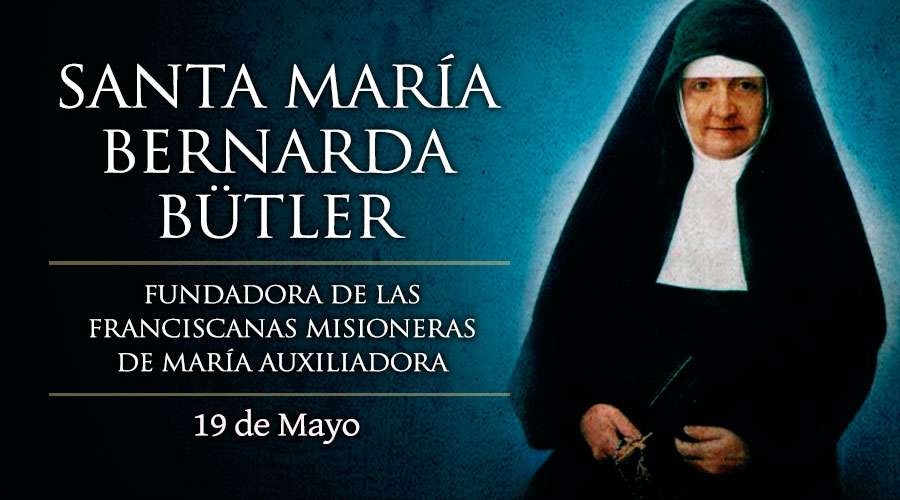