The growing violence in Mexico, which totals more than 13,000 murders so far this year, and a questioned government policy of “hugs, not bullets”, seem to herald a dark future for the country. Given this scenario, is it possible to have hope?

Interviewed by ACI Prensa, Archbishop Carlos Garfias Merlos, Archbishop of Morelia, in the Mexican state of Michoacán, stressed that “the fundamental thing about hope is that our Mexican people have faith.”

“I believe that within the serious crisis that we are experiencing in Mexico, especially due to the issue of violence and insecurity, thank God we have a lot of hope”, he expressed.

“The source of hope in the human person is having God present in their hearts. That is why I consider that there is a lot of hope, ”she added.

Monsignor Garfias Merlos stressed that the mission of the Catholic Church is to “evangelize, help people find Christ, help people from the encounter with Christ learn to be supportive in comfort and in the accompaniment of those who suffer the most. ”.

“And the Church will always be able to continue promoting”, he said, the call “to the authorities and all of civil society for constructive dialogue”.

From January 1 to July 7 of this year, according to official figures, 13,679 homicides have been registered in Mexico.

The most recent list of the most violent cities in the world, published in March of this year by the Citizen Council for Public Security and Criminal Justice, reveals that 18 of the 50 cities with the highest urban violence in the world are in Mexico.

The most dangerous city in the world is Zamora, in the state of Michoacán, about 149 kilometers west of Morelia.

The Catholic Church has not been immune to the growing violence in the country. A recent report by the Centro Católico Multimedial (CCM) revealed that in the last three decades a cardinal and 57 Catholic priests have been assassinated in Mexico.

The most recent homicides are those of Jesuit priests Javier Campos and Joaquín Mora, murdered by organized crime on June 20, 2022, inside a church in the Sierra Tarahumara, in the Mexican state of Chihuahua.

In recent weeks, two bishops and a cardinal have denounced having been intervened by members of organized crime while traveling by road in Mexico.

3 keys from the Church against violence

The Archbishop of Morelia pointed out that in the face of the violence that Mexico is experiencing, “we have to do three very important things.”

The first, he said, isdon’t lose godpray and always keep ourselves in that search for peace in our hearts”.

Second, he continued, it is necessary “care about the victimsthis is caring for the victims in solidarity, comforting, spiritually, psychosocially, financially, and legally accompanying the victims”.

“To the extent that we can have a better way of accompanying the victims, we can give that consolation to those who are damaged, injured, in great pain and with great anger, or with a great desire for revenge through blood.”

“It is very important to remove that by transforming people, in order to transform the social fabric,” he assured.

As a third key, the Prelate said that “A very important aspect to be able to clean the blood of Mexico is to grow in the good relationship between civil society and the authorities. and with all sectors of society.

“I think there is a source to be able to transform this blood that unfortunately has spread throughout our country. It is a source and seed of peacebuilding,” she assured.

The Church is committed to education and work for peace

The Archdiocese of Morelia, hand in hand with various civil society institutions, forms the Michoacan Council for the Construction of Peace and Reconciliation, currently chaired by Msgr. Garfias Merlos.

This council, said the Archbishop of Morelia, works on four axes. The first of these is “educate to generate a culture of peace”.

“We have had meetings in schools” at their different levels, “offering students, teachers and parents schemes to generate a culture of peace,” he said.

The second line of work, he continued, is the “Listening Center, which is for care for all victims of violence and help them recover their sense of life, of self-worth and their confidence to relate to other people and experience belonging”.

A third axis, he indicated, are the “Support Centers for Rehabilitation and Accompaniment for Addicted People, which we call Casa del Artesano, and there are cares for people with serious addiction problems”.

They also have “a line for life, to provide support” to people with suicidal tendencies.

The Prelate pointed out that the last axis on which they are currently working “is that of the Social and Solidarity Economy, which from there we are looking for offer support alternatives through the cooperative, or small business organizations, to the most disadvantaged”.

In this way, he indicated, people with limited resources can “have forms of self-employment to be able to get ahead in life.”

Two additional lines of work are also being prepared, one dedicated to emergency care and the other to care for the “Common Home”.

With this work, highlighted the Mexican Prelate, “a model is proposed to build peace, to favor reconciliation and so that we have better living conditions.”

Saint Christopher of Licia, patron saint of travelers and pilgrims, is remembered today.

Sun Jul 10 , 2022
Every July 10, Saint Christopher of Licia, a prominent figure in the history of Christianity in the first centuries, is remembered; and although the difficulties in knowing him and understanding his historical role are real, it is known with some certainty that he lived during the rule of Decius, the […] 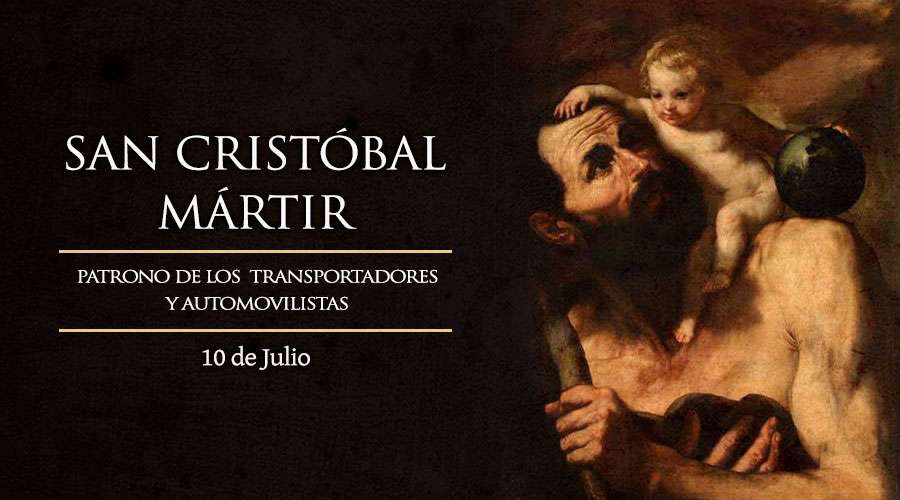