How was the devotion to the Sacred Heart of Jesus born? Below you will find the full story on how and where this tradition originated.

History of devotion to the Sacred Heart of Jesus

The devotion to the wounded heart of Jesus has its origins in the 11th century, when pious Christians meditated on his five wounds.

At that time, prayers to the Sacred Heart grew among the faithful, to the wound on the shoulder of Jesus, among other private devotions. They all helped Christians to focus on his Passion and Death, in such a way that they could grow in love for Him.

However, it was not until 1670 that the French priest P. Jean Eudes celebrated the first feast of the Sacred Heart of Jesus.

Around the same time, a nun known for her piety, Sister Margarita María Alacoque, began reporting visions of Jesus. He appeared to her frequently and, in December 1673, she allowed him – as she had once allowed Santa Gertrudis – to rest her head on her heart.

As she experienced the consolation of her presence, Jesus spoke to her of his great love and explained that he had chosen her to make his love and kindness known to humanity.

The following year, in June or July 1674, Margaret Mary reported that Jesus wanted to be honored under the figure of his heart of flesh. She asked the faithful to receive him frequently in the Eucharist, especially on the first Friday of each month, and to practice a devotional holy hour.

In 1675, during the eighth Corpus Christi, Margarita María had a vision that later became known as the “great apparition”.

In it, Jesus asked that the feast of the Sacred Heart be celebrated each year on the Friday following Corpus Christiin reparation for the ingratitude of men towards his redemptive sacrifice on the cross.

???? VIDEO | These are the 12 promises of the Sacred Heart of Jesus https://t.co/ISmclzLoZw pic.twitter.com/JXjKyhv2kC

The devotion became popular after the death of Saint Margaret Mary in 1690. However, because the Church is always careful to approve an apparition or private devotion, the feast was not established as official throughout France until 1765.

On May 8, 1873, the devotion to the Sacred Heart was formally approved by Pope Pius IX, and 26 years later, on July 21, 1899, Pope Leo XIII urgently recommended that all bishops around the world observe the feast in their dioceses. .

Pope Leo approved the following indulgences for the devotion:

• For performing public or private devotion, seven years and seven quarantines (remission of temporary punishment equivalent to what would be granted for forty days of penance) each day.

• If the devotion is practiced daily in private, or if a person attends a public function at least ten times, a plenary indulgence (remission of all temporal punishment for sins) on any day in June or between June 1 and 8 July (according to the Urbis et Orbis Decree, May 30, 1992).

• The indulgence ‘toties quoties’ (for the souls in Purgatory) can be earned on June 30 or the last Sunday of June in those churches where the month of June is solemnly celebrated. Pius X urged a daily sermon, or at least for eight days in the form of a mission.

• To the priests who preach the sermons at the June solemn celebrations in honor of the Sacred Heart, and to the rectors of the churches where these ceremonies are celebrated, the privilege of the Gregorian Altar on June 30.

• A plenary indulgence for each communion in June, and for those who promote the solemn celebration of the month of June.

Translated and adapted by ACI Prensa. Originally published in the National Catholic Register.

Today we celebrate San Romualdo, Abad, the monk touched by a family tragedy 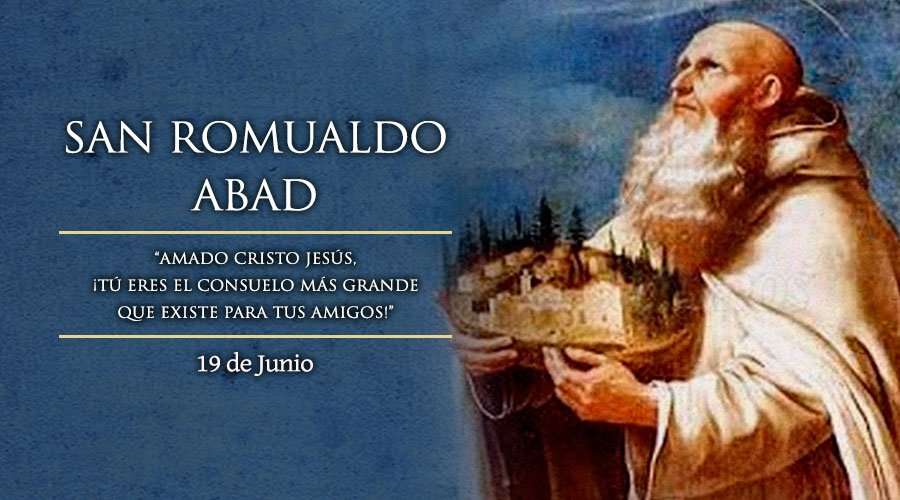