Winners of the Goya Awards 2022

The Goya 2022with the centenary of Luis García Berlanga in memory and the incomparable setting of the Palau de las Arts in Valencia, give victory to the good bossfrom Fernando Leon de Aranoa.

Blanca Portillo wins her first Goya after 5 nominations, and snatches the bobblehead from Penélope Cruz

Without excessive frills or eccentricities, the gala number 36 of the Spanish Film Academy Awards It has passed with unusual fluidity and dynamism. It is true that there have not been very memorable moments, but there have been no big mistakes either.

I prefer the ‘Hello Penélope’ moment in that emotional speech by María José Llergo, ‘the truck’ by Verónica Echegui and the performance by maestro Sabina accompanied by Leyva as the most striking anecdotes of the night. Perhaps, in my opinion, the innocuous contribution of C.Tangana. With Rita Payés the performance was more than justified.

The vindication, something usual in this ceremony, has been restrained and subtle touching several sticks but without giving too much wax. Although Pedro Sánchez, present among the respectable, should see more Spanish cinema, he has not had to blush too much.

For the rest, a gala directed by the filmmaker Dani de la Torre (whom we were able to interview on this blog for his work on the series La Unidad) that has been characterized by its continuous rhythm and elegant staging. This time I saw it in its entirety, without hitting any nod, something strange on RTVE.

That said, as has been the trend in recent years, things have been very spread out. The awards have been happening without notable surprises, not because of the obvious but because most of them could have gone to any of the four nominees for each category. It should be noted, in any case, the lack of awards for Almodóvar with Parallel Mothers or the 20 nominations for the good boss that have remained in 6 statuettes, counting among them, in addition to best film, the one for best original screenplay, best leading actor, direction, editing… Which has been the fat ones.

However, for me, the great winner of the night, despite the fact that except for the adapted script, it was not nominated for the major categories, is The laws of the border, with 5 Goyas. The second most awarded of the night with all its artistic Goyas, the adapted script and the best revelation actor. Well deserved all of them.

Mediterráneo (3), Maixabel (3) and Libertad (2), the other three nominees for best film (along with The Good Boss and Parallel Mothers) have been the ones who have divided up the rest of the spoils from the feature films, leaving Among them, two other titles were added, such as Tres (sound) or Way Down (special effects).

What if, Javier Bardem He has won his sixth Goya, and that he had Tosar, Gutiérrez and Fernández next to him, fixed on this prize thing. But it is that perhaps the good Javier is the best Spanish actor today (with the permission of Antonio Banderas, who appeared at the end of the gala after finishing the screening of his work at the Teatro del Soho in Malaga) and probably one of the best of all time. An excellent job in The good boss that is well worth that sixth big head that there was no doubt he was going to dedicate to his recently deceased mother (Pilar Bardem) and to the ever-present Penelope Cruz, who will soon be expected at the Oscars for Parallel Mothers, a gala in which her husband will also be present in nominations for Being the Ricardos. Let’s go Spain!

The Goya for the animated short film, where we Murcians had deposited our savings and hopes in Umbrellas, the work of José Prats and Álvaro Robles from Caravaca, has finally gone to The Monkey, the great favorite. At least our countrymen will have enjoyed the catering and a photo with Inma Cuesta and company will have been brought home.

As for the honorifics, as deserved as well executed. The concise, eloquent and heartfelt speeches of Cate Blanchett and Joseph Sacristan They were in the line of the gala and at the height of their trajectories. Mariano Barroso, president of the academy put the accent of his speech on the scriptwriters.

As Berlanga would say:

«And neither were they happy, nor did they eat partridges because wherever there are ministers, a happy ending is impossible» (La escopeta nacional).

Complete list of the winners of The Goya Awards 2022

The Return: Life After ISIS Heroes. Silence and Rock & Roll
who prevents it
A blues for Tehran

nameless song
the mountain range of dreams
The Siamese The Wolves

The good patron The Mediterranean grandmother
Way Down

the good boss
The laws of the border
Parallel mothers Maixabel

the good boss
The laws of the border
Freedom, by Enrique Urbizu Maixabel

Love in its place The good boss Maixabel
Mediterranean

Post-war album The cover Laws of the border
Mediterranean

Who are the waitresses in The Boba Fett Book?

Wed Feb 16 , 2022
Curious characters and actors in The Book of Boba Fett The series of Disney+, both in the Star Wars universe and in Marvel, are full of Easter Eggs (winks or Easter eggs). This time there are many amazing characters, among all of them, social networks are wondering Who are the […] 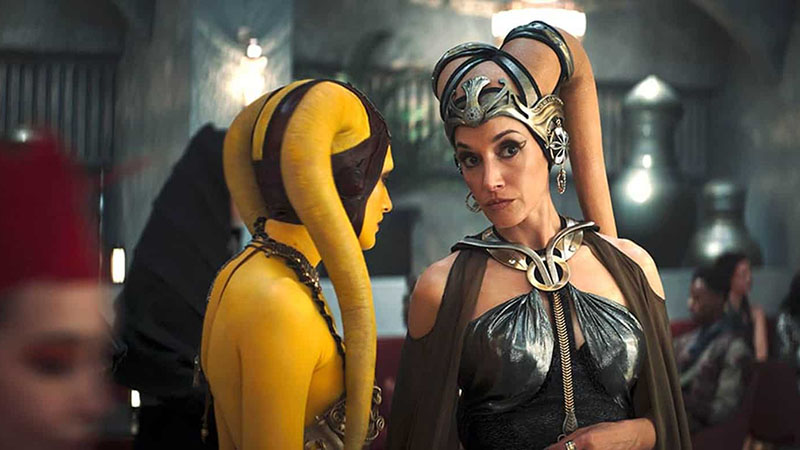