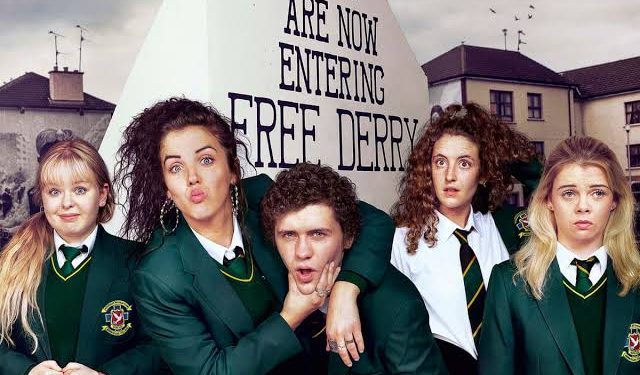 Channel 4’s Derry Girls is a one-stop destination for anyone searching for a comedy-drama set in the ’90s. With two superb seasons down the line, Season 3 is on the way, and fans can’t be more excited to see the Irish kids back on screen.

The show presents teens named Erin, Orla, Clare, Michelle, and James as they spend their teen life during The Troubles in Derry, Northern Ireland. James, although a guy, is part of the Girls’ group and is often counted as one. The adults with their conflicts and teens trying to live through them sound dark, but it’s very funny.

Not many have been revealed about the plot, but Nichola Coughland claims it’s the best yet. Lisa McGee, the creator of Derry Girls, hinted at a potential romantic development between Erin and James. She even called the season “quite ambitious,” perhaps implying developments that will be new to the fans.

The season 2 finale was dropped more than two years ago in 2019, and fans have been waiting for Season 3 ever since. Sadly, there’s still no official release date. The pandemic caused filming to stop many times, delaying production. In a tweet, McGee said she’s “fine-tuning” season 3, so we may expect it to drop later in 2022.

Derry Girls is a coming-of-age show that shines more with time. Picking an age of conflict, basing a show around it, and making it funny is a feat in itself, and the credit goes to the creator and the brilliant actors. It has certainly made its place in the genre, and Season 3 will hopefully cement it further.

Fans Continuously Campaign for 'Anne with an E Season 4' Renewal

Wentworth season 9 is not coming to Netflix in September 2022

Bitcoin Equaliser Review 2022 – Are Your Investments In Safer Hands?