Fr. Idris Moses Gwanube, who was ordained a Catholic priest for the Diocese of Jalingo (Nigeria) on February 25, shared his moving testimony of conversion from Islam to Catholicism.

On February 25 of this year, the Bishop of Jalingo, Msgr. Charles Michael Hammawa, ordained six young men to the priesthood at the Cathedral of Our Lady Queen of Peace, including Fr. Idris Moses Gwanube, who today is assistant to the parish priest at Holy Family Takum Church.

On March 14, in an interview with ACI Africa -an agency of the ACI Group-, Fr. Moses said that his conversion to Catholicism and path to the priesthood were full of challenges, but that today he is “very happy” to finally be able to celebrate Mass and give the sacraments to the faithful.

Fr. Moses was born into a Muslim family in Mararraba, Taraba State, in northeastern Nigeria, an area where the majority practice Islam.

He related that his “vocational path” began in December 2004, when he was 14 years old and dedicated himself to selling bread to the children of the local Catholic parish. “That day I made good sales; as a result, the church became a center of business for me,” she recalled.

Eventually he made the decision to convert to the Catholic faith. He said that he “was happy” because he believed that his parents would not find out, because the church was far from his house; and he confessed that he managed to hide it until he was “deeply involved in the faith and a catechumen.”

Moses said that conversions from Islam to Christianity are more difficult for men than women. “Two of my half-sisters are Christian, but not Catholic, because they married Christians”; and although it was difficult, “it was easier for them because they are women.”

She explained that she comes “from a culture where women seem to have no religion of their own. Therefore, the religion of her husband becomes hers.” “My conversion was harder, because I am the only son of my father who converted,” she said.

The young priest pointed out that “when my family found out that I was going to church, every time I went there my older brothers always beat me.” “I lost all my friends. Once, my mother starved me to death,” he said, recounting that he ended up being kicked out of his house.

“I remember being locked in a room, because I was going to the Catholic charismatic program, but with the help of God, I escaped through the window of the parish house,” he said. One rainy night, “after one of our neighbors asked permission to take me to a juvenile prison, my dad asked me to leave his house,” he added.

So, “I went to the house of my godfather for baptism, Mr. Anthony Ishaya. At the baptism, my godfather was threatened with a court order. It was there that my then parish priest, Fr. Kieran Danfulani, stepped in” and facilitated my trip out of Mararraba, he said. Moses then enrolled in Sacred Heart Minor Seminary in Jalingo and graduated in 2012.

Shortly before graduation “I asked to become a Catholic priest in the diocese of Jalingo”, and after attending Bishop Timothy Cotter Seminary in Adamawa, “I moved to Saint Augustine Major Seminary in Jos, where I studied philosophy and theology”, story.

He said that he enjoyed a good relationship with his instructors and colleagues in the seminary and that he became “appointed choir master”. In 2017 he did a year of pastoral service at Bishop Patrick Sheehan University in Wukari, and on July 18, 2021 he was ordained a deacon.

“I faced so many crises, both inside and outside [del seminario]. But since the hand of God was there, I overcame everything to fulfill my destiny: the priesthood,” he noted.

Fr. Moses recalled that he almost left the seminary, but that “God used some of my colleagues and friends, spiritual directors,” the rector and vice-rector, “so that they speak to me and give me reasons to stay and discern well.”

In addition, he said that in his apostolate he came to “sleep in a neglected room”, was “rejected by some local churches in the countryside”, and became ill with malaria due to mosquito bites and “eating some foods that are not good for my organism”.

The young Nigerian said that the day he was ordained a priest “I was happy that my parents attended my ordination”, because “it shows that all my sacrifices were not in vain”; and he pointed out that now he fulfills his service as an assistant to the local pastor “doing my best and always ready for any mission or apostolate that the Church asks of me.”

“Now I am a Catholic priest and this gives me more joy than ever, especially now that it is more vivid to see me celebrate the Eucharistic sacrifices and other liturgical functions; as well as ministering the Sacraments and counseling people,” he stated.

Father Moses referred to Christian persecution and assured that “it is a reality in Nigeria”, the most populous nation in Africa, but he specified that “it does not happen everywhere”.

“In some states in Nigeria, Christians don’t stay in the same area as Muslims,” ​​he said. In addition, “there are some job opportunities that as a Christian, you may not be offered in some places.”

There are places in the country “where Christians cannot worship freely; for security reasons I cannot mention names,” he said. While on Fridays you can not travel on some roads, “because they have become a place of worship” to Islam and “everyone has to wait until the prayers are over” to travel, he added.

He said that “in some Nigerian states the land cannot be sold to Christians to build places of worship” and that “many priests, pastors, have been killed, kidnapped and churches have been burned because of their faith”.

In this regard, Fr. Moses called on the inhabitants of his country to “overcome fanaticism and be realistic about religious freedom”, as in Western countries, “where people can practice the religion of their choice”.

The priest said that “we will gradually overcome Christian persecution in Nigeria” if people stop “thinking or fighting for God, because He can fight for himself if things don’t work out for him” and if “our idea of ​​religious freedom” goes from theory to practice.

“We should all be concerned about the welfare of humanity, because religion is a matter of faith in the Supreme,” he said.

Finally, he encouraged those who want to convert to the Catholic faith, but are afraid of religious persecution, to stand firm in their faith following the example of Christ.

“If as young as 14 years old I stood my ground and never let any persecution, beatings or threats prevent me from being a Christian, which I am now and I am sure by faith as my way of salvation, I believe that anyone can,” he said.

Today is the feast of Saint Cyril of Jerusalem, from catechist to Doctor and Father of the Church

Fri Mar 18 , 2022
Every March 18, the universal Church celebrates Saint Cyril of Jerusalem, Doctor of the Church. Saint Cyril was a bishop of Greek origin who lived in the fourth century, considered one of the most important exponents of the Patristic (period of the Fathers of the Church) for his contribution to […] 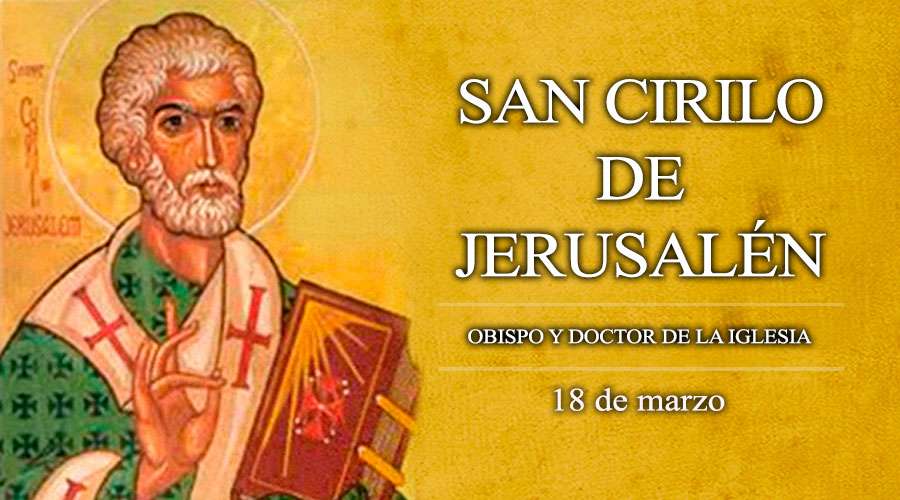