Cardinal Walter Kasper, an influential theologian considered to be very close to Pope Francis, has warned that the German “Synodal Way” is in danger of self-destructing if it does not heed growing objections from bishops around the world.

The Cardinal further said that the organizers of the Synodal Way were using a “lazy trick”, which in effect constituted a “coup d’état” that could result in a collective resignation, reported CNA Deutsch, the German language agency of the ACI Group.

The 89-year-old Cardinal is President Emeritus of the Pontifical Council for Promoting Christian Unity, and was Bishop of Rottenburg-Stuttgart, in southwestern Germany.

The Cardinal spoke at a virtual study day on Sunday, June 19, in the framework of the “New Beginning” (Neuer Anfang) initiative, a reform movement critical of the “Synodal Path.”

Cardinal Kasper warned that the Catholic Church is not a substance that can be “reshaped and reshaped to suit the situation.”

In April, more than 100 cardinals and bishops from various parts of the world published a “fraternal open letter” to the bishops of Germany, warning that radical changes in Church teaching promoted by the Synodal Path could lead to a new schism that arise from Germany.

In March, an open letter from the Nordic bishops expressed alarm about the synodal process, and in February a strong letter from the president of the Polish Catholic Bishops’ Conference raised serious concerns.

Those concerns, Cardinal Kasper said in his speech, “will be repeated and reaffirmed and, if we do not pay attention to them, they will break the neck of the Synodal Way.”

For the Cardinal, “the original sin of the Synodal Way” was that it was not based on the letter that Pope Francis sent to the Catholic Church in Germany, with its “proposal to be guided by the Gospel and the basic mission of evangelization” .

Instead, the German process, initiated by Cardinal Reinhard Marx, Archbishop of Munich and Freising, “took its own way with partly different criteria,” said Cardinal Kasper.

In June 2019, Pope Francis sent a 19-page letter to German Catholics, encouraging them to focus on evangelization in the face of a “growing erosion and decay of the faith.”

The president of the German Bishops’ Conference, Msgr. Georg Bätzing, has repeatedly dismissed all signs of concern about the Synodal Way, instead expressing his disappointment about Pope Francis in May 2022.

In an interview published in early June, Pope Francis reiterated that he told the leader of Germany’s Catholic bishops that the country already had “a very good evangelical church” and that “we don’t need two.”

“The problem arises when the synodal path comes from the intellectual, theological elites, and is heavily influenced by external pressures,” the Holy Father said in that interview.

Bishop Bätzing, who also serves as president of the “Synodal Way”, is also a signatory of the “Frankfurt Declaration”. This petition demands that the German bishops declare their commitment to implement the resolutions approved by the process.

On June 19, Cardinal Kasper criticized this “compromise” pressure, saying it was “a trick and a lazy trick at that.”

“Just imagine a civil servant who allows himself to be appointed, then renounces the exercise of his legal obligations,” the Cardinal said.

“He would surely face proceedings under the civil service law. Ultimately, such self-compromise would amount to a collective resignation of the bishops. Constitutionally, the whole thing could only be called a coup, that is, an attempted coup.”

Instead, he said, a synod constitutes “an extraordinary interruption” to ordinary proceedings.”

The “Synodal Way” describes itself as a process that brings together the bishops of Germany and certain lay people to discuss and pass resolutions on the way power is exercised in the Church, on sexual morality, the priesthood and The role of women.

Participants have voted in favor of drafts calling for the ordination of women to the priesthood, blessings for gay couples and changes to the Church’s teaching on homosexual acts, prompting accusations of heresy and fears of a schism.

Cardinal Kasper has repeatedly raised concerns about the multi-year event, but the president of the episcopal conference, Msgr. Georg Bätzing, has defended him.

At the end of his message, Cardinal Kasper warned that one cannot “reinvent the Church”, but must contribute to renewing it in the Holy Spirit: “renewal is not innovation. It doesn’t mean just trying something new and inventing a new Church.”

Instead, the Cardinal said, true reform is about “letting the Spirit of God make us new and give us a new heart.”

“God wanted us to be here”: stories from the World Meeting of Families in Rome

Thu Jun 23 , 2022
Since the morning of Wednesday, June 22, in the surroundings of St. Peter’s Square in Rome, a different atmosphere was already in the air. Thousands of families from different countries of the world They arrived in the Eternal City to participate in the inauguration of the X World Meeting of […] 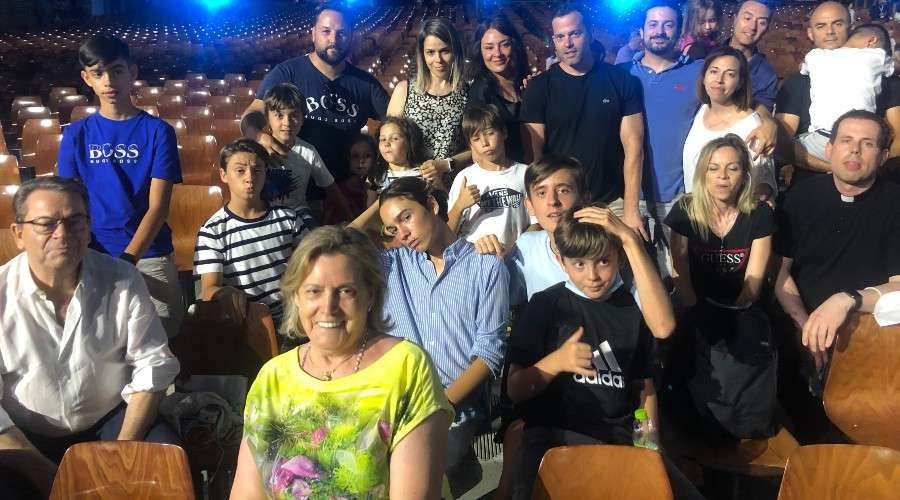