Although at first it was Sharon Stone who was negotiating to join ‘Blue Beetle’, one of DC’s new projects, in the end it was Susan Sarandon who took on the role of Victoria Kord, the villain of the film. As we told you more than a year ago, back in February 2021, in ‘Blue Beetle’ we will see the company’s first Latino superhero, who will be played by Xolo Maridueña, Miguel Diaz in ‘Cobra Kai’.

Who is Blue Beetle?

The superhero was created in 1939 by Charles Nicholas Wojtkoski for Fox Comics and his first identity was that of Dan Garrett, who got his superpowers from a special vitamin, 2-X. His successor, Ted Kord, jumped into the DC Universe during the Crisis on Infinite Earths in 1983, though he had no special abilities and used science to fight crime. The third Blue Beetle and the most current is Jaime Reyes, a teenager who discovers an alien beetle that is inserted into the base of his spine and allows him to develop armor and travel through space, as well as improve his speed and strength, as well as create weapons and wings from scratch. This version is the brainchild of Keith Giffen, John Rogers and Cully Hamner and is the one we’ll see in theaters presumably on August 18, 2023. Unlike what Warner Bros. Discovery plans to do with ‘Batgirl or ‘Black Canary’, which will come directly to HBO Max, ‘Blue Beetle’ will go through theaters, but the announced date seems like a problem considering how close it would be to ‘The Flash’ on the calendar, delayed to June 23, 2023 (or maybe it’s the cursed film by Ezra Miller the one that moves its premiere again).

Although little has been revealed, very little of its plot and Blue Beetle is completely unknown to the general public, we do know that Victoria Kord, Sarandon’s character, has been specially designed for the film, and with that surname from Empire they speculate that will play the wife of Ted Kord or an evil version of the character who have changed sex.

Good Friday in Ukraine: Cardinal envoy of the Pope prays on his knees before mass grave

Fri Apr 15 , 2022
Polish Cardinal Konrad Krajewski, sent by Pope Francis to Ukraine to celebrate Holy Week, prayed on his knees this Good Friday before a mass grave near the capital kyiv, where at least 80 people “without a name or surname” are buried. The Vatican Press Office reported that this afternoon, returning […] 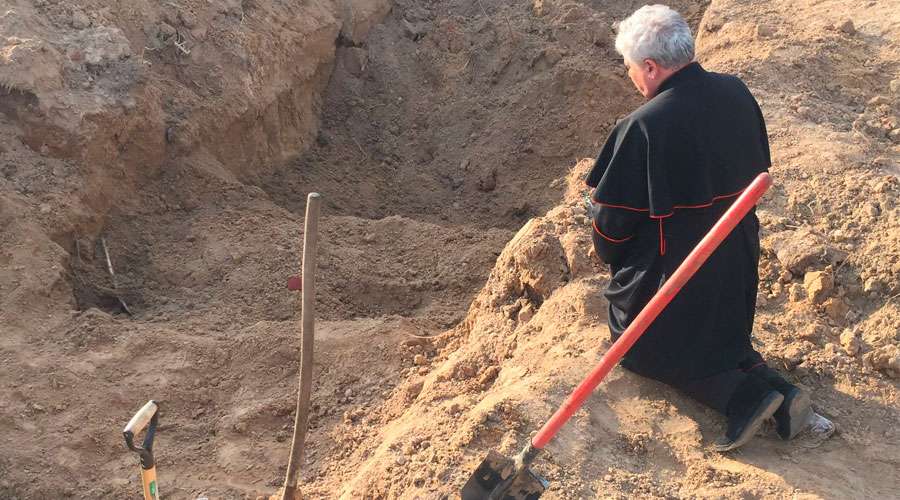