The Bishop of Brownsville (United States), Msgr. Daniel Flores, denounced that weapons “are easier to get than aspirin”, after an armed man murdered this Tuesday, May 24, at least 19 children and two teachers in the Robb Elementary School in Uvalde, Texas.

“We sacralize the instruments of death and then we are surprised that death uses them,” said the Prelate, whose diocese is in the state of Texas.

On his Twitter account, Bishop Flores wrote this Wednesday: “Don’t tell me that weapons are not the problem, people are. I’m sick of hearing it. The dark first takes our children and then kills our children, using weapons that are easier to get than aspirin.”

Bishop Salvatore Cordileone, Archbishop of San Francisco, also spoke from his Twitter account and said that the Bishop of Brownsville “is right.”

The Archbishop of San Francisco noted that “sensible gun regulations need to be in place to help stop the pandemic of gun violence.” The Prelate proposed “stricter background checks, restrictions on AR-15s [rifle semiautomático usado en la masacre de la escuela primaria] and increase the age of buyers to 21” years.

These were two of many responses by the United States Catholic bishops to the massacre by an 18-year-old man who shot children and teachers at Robb Elementary School in Uvalde, about 80 miles west of San Antonio. Among the victims were ten-year-old students.

The Archbishop of Boston, Cardinal Sean O’Malley, also took to social media to share his reaction to “the unthinkable loss of so many young and innocent lives.”

“Our nation has too often become a site of heinous crimes, of gun violence that has claimed too many lives, yet nothing more heartbreaking than that of innocent children. We must take action to stop this senseless carnage,” said the Cardinal.

The Cardinal said that “we pray for the grieving families and the community of Uvalde, whose lives were changed forever. At this time we embrace you with prayers for peace and healing as we entrust lost loved ones to the Lord, comforted by the promise of eternal life.”

For his part, the Archbishop of Chicago, Cardinal Blase Cupich, shared statistics on the increase in armed violence in the country in 2020 and recalled that the annual meeting of the National Rifle Association is scheduled for this week in Texas.

“As I reflect on this latest American massacre, I return to the questions: who are we as a nation if we don’t act to protect our children? What do we love more: our instruments of death or our future?” she questioned.

The Archbishop noted that “the Second Amendment [de la Constitución estadounidense] it did not come from Sinai. The right to bear arms will never be more important than human life. Our children also have rights. And our elected officials have a moral duty to protect them.”

For his part, the Bishop of Providence, Msgr. Thomas Tobin, wrote that he adds his “fervent prayers to those of many others for the victims of the horrific school shooting in Uvalde, Texas. May God grant eternal peace to the deceased and the greatest possible comfort in this dark hour to their families and loved ones.”

Likewise, the Archbishop of Los Angeles, Msgr. José Gomez, asked the Virgin of Guadalupe to “take the victims of this violence in her tender arms, and bring comfort to those who cry and healing to the wounded. And may God grant peace to every heart that is troubled tonight. We ask this in the name of Jesus.”

On Wednesday, Pope Francis told the faithful gathered in St. Peter’s Square that his heart “is broken by the Texas elementary school massacre.”

“It is time to say enough to indiscriminate arms trafficking. Let us all work hard so that such tragedies never happen again,” the Pontiff said.

Translated and adapted by Eduardo Berdejo. Originally posted on CNA.

Today is celebrated to Santa Mariana de Jesús, the lily of Quito

Thu May 26 , 2022
“Her poverty gives joyful and credible witness to God as the true wealth of the human heart, contests the idolatry of money and becomes a prophetic voice in the midst of society,” said Saint John Paul II about Saint Mariana de Jesús Paredes, invoked as the “Azucena de Quito” and […] 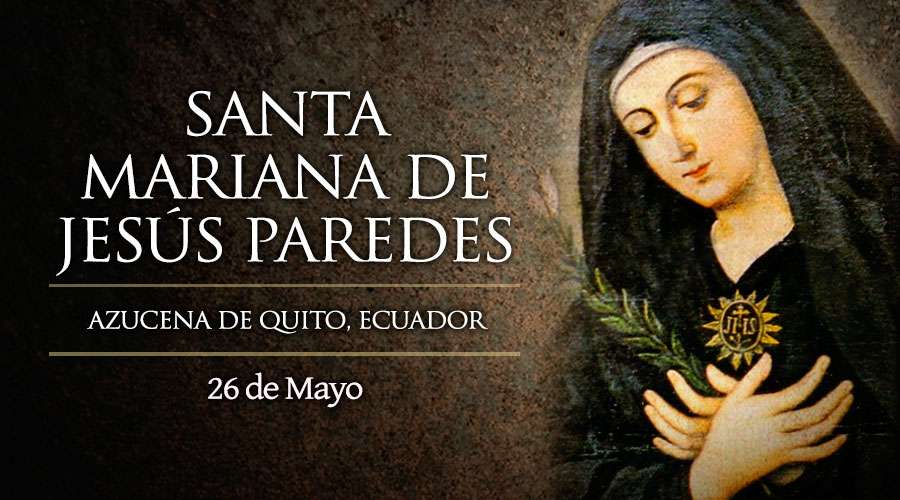