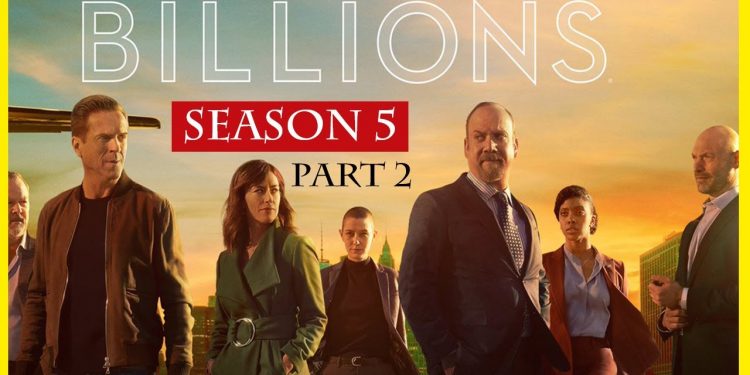 0
SHARES
353
VIEWS
Share on FacebookShare on TwitterShare on WhatsApp

Almost after a year, Billions Season 5 Part 2 has got a release date. The first seven episodes of the fifth season were released in Spring 2020 on Showtime. And since then, fans are waiting for the show creators to release the next part. However, the wait is finally over now. Just in a few days, the fifth season will return with the rest of its episodes. What are Axe and Chuck up to in the forthcoming episodes? How will things go on in part 2? Here’s everything that you can expect from the second part of Billions’ Season 5.

When will Billions Season 5 part 2 Release on Showtime?

Billions Season 5 Part 2 is finally releasing on September 5th, 2022 on the Showtime network. The fifth season got split into two parts because of the global pandemic, COVID-19. After seven episodes, the show creators decided to halt the season and come up with another part after things get better. Moreover, the show is shot in New York, the city that was majorly affected due to the COVID-19 pandemic. Therefore, the show creators decided to halt the production in order to ensure everyone’s safety on the set. Henceforth, fans can now breathe a sigh of relief as the show is finally coming back next month. During the early months of the lockdown, both the creators and fans were sure that they will come up with new episodes before 2020 ends. But that just couldn’t happen and on December 30, the show’s official Twitter account tweeted that they will return with new episodes in 2022.

We expect to see the following people in Billions Season 5 Part 2:

Is there any Trailer for Billions Season 5 Part 2?

Showtime released the trailer for Billions Season 5 Part 2 a few weeks ago. The teaser depicts some intriguing moments for the fans and also suggests that a lot is going to happen in the forthcoming episodes. Besides that, the trailer also gives a sneak peek at the plot of the second part. Find the expected plotline below.

When we last left the show in the seventh episode, things were heating up between Axe and investor Michael Thomas. On the other hand, Chuck was figuring out his father’s kidney transplant process by all means. In Billions Season 5 Part 2, we expect the story to continue further. Moreover, fans will come to know what are Chuck and Axe up to. As mentioned above, the trailer also hints at several intriguing things in the upcoming episodes. Besides that, fans will also see Chuck and Mike Prince together in an alliance and their ways to tackle with Bobby Axelrod.