A bill that sought to ban therapies to leave the homosexual lifestyle in Colombia has been “filed” and cannot be debated in the current legislature of the Congress of the Republic, said Fernando Vélez, founder of Red Provida Latam.

On May 10, Bill 461 was presented in the Colombian House of Representatives, which sought to prohibit conversion therapies. However, on Tuesday, June 7, the homosexual congressman Mauricio Toro, who presented the project, was recused and the debate on the initiative was not allowed.

According to Toro, the challenge, presented by Congressman Jonathan Silva, appeals to “homophobic and discriminatory” arguments, with which he seeks to leave him out of the debate.

In statements to ACI Prensa, Fernando Vélez, said that “the challenge was made based on the personal interests of Mr. Mauricio Toro, due to his sexual condition and for his activism in favor of the LGBTI movement. This fact disqualified him according to Colombian regulations.”

“It was a prudent and opportune challenge according to the law, there was no discriminatory mood and less homophobic”, he added.

This June 15, the Congressional Ethics Commission reported that the challenge was not admissible and that the parliamentarian could present the bill.

“However, due to time issues, the project cannot pass in the current legislature [que concluye el 20 de junio]. This implies that the project it is filed and effectively sank. Surely in the new Congress, which takes office on July 20, 2022, they are going to try to get a senator to present it again and enter the debate, “explained Vélez.

“We must be prepared to act in defense of fundamental rights,” he stressed.

According to the founder of Red Provida Latam, this bill “has great threats to Colombian society” because “it threatens personal freedom, freedom of worship and professional practice.”

“A threat has to do with parental authority, mentioned at the beginning of the bill, where it is certain that parents will be left behind. prevent them from guiding their own children on issues of sexual identityin the doubts and concerns about these affective or emotional matters”.

“Not only the state could take away their parental authority but also implicate them in criminal proceedings that can put the parents in jail,” he explained.

Another point of concern is the treatment of conscientious objection.

Vélez specified that “health professionals could not accompany a process in which a person, even of their own free will, wants to abandon homosexuality.”

“If the health professional intervenes in favor of the healing of that person, he can lose not only his job but his professional card and face criminal proceedings, and the truth, at the rate we are going, even life,” he said.

Another worrying element, he points out, has to do with the priests, pastors, counselors, counselors, among others, “who from faith and psychology accompany these processes of reconversion or healing.”

“Any church that wants to help these people could face legal persecution and criminal proceedings, as well as closure,” he added.

What are conversion therapies?

What is known today as “conversion therapies” are a relatively vague set of religious or psychological forms that come, for the most part, from the North American Protestant world, and that respond to evangelical anthropology, which is very different from Catholic.

In many cases, especially in the past, between the 1970s and 1990s, many of these practices were physically, mentally, and spiritually abusive. However, this was not the case for all these practices.

The problem is that the term “conversion therapy” has become a generic concept used by the LGBT (lesbian, gay, bisexual and transgender) lobby to demonize any form of Christian or Catholic help for people with same-sex attractions, as well enough to get laws passed that make them illegal.

Laws being introduced in some parts of the world so broadly condemn “conversion therapy” that they make even the preaching of biblical doctrine on homosexuality illegal and punishable by law.

Vélez explained that “there is no evidence whatsoever that there is any type of institution in Colombia that promotes reconversion using electric shocks, torture or physical and psychological violence.”

“In the event that something so serious exists, the invitation is to take legal action against the people or institutions that would practice this type of act. Colombian law is explicit in condemning all kinds of torture or physical violence against a person,” he said.

He also stressed that “it is not necessary to advance a bill to classify a crime that is already present in the law,” adding that “what this bill seeks is to attack the family and religious beliefs, it directly attacks our children and adolescents. serving the LGBTI lobby to indoctrinate without restriction”.

“We have a lot of evidence of homosexual people who feel a deep and authentic desire for change, they are not well with what they live, they are deeply unhappy and they want authentic and professional help,” said Vélez.

He also recalled that these people “freely and voluntarily seek help from many trained professionals to guide them properly.”

“In this process, which is carried out with deep respect, it is where we speak of a conversion in which not only different aspects of life are healed and reconciled, but the person begins to lead a calmer life consistent with their desires. deeper,” he explained.

According to Vélez, “this type of therapy or psychological and spiritual help has done a lot of good for thousands of people in Colombia.”

“I repeat that these therapies are given from freedom and not from physical or psychological violence, all within the framework of respect,” he added.

Thu Jun 16 , 2022
Every June 16, the Church celebrates Saint John Francis Régis, a French priest and missionary of the Society of Jesus (Jesuits). The French Jesuits have him as their patron saint, while the entire Church, by determination of Pope Pius XII, venerates him as “patron saint of rural missionaries”. Juan Francisco […] 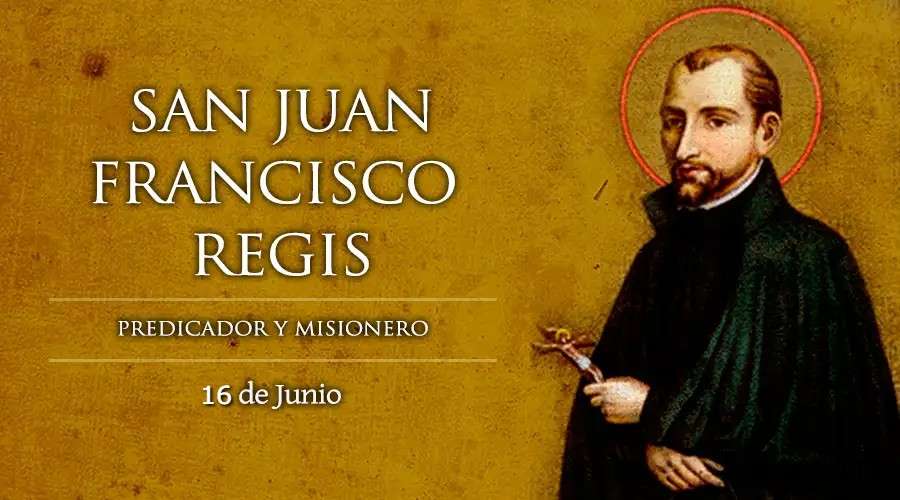