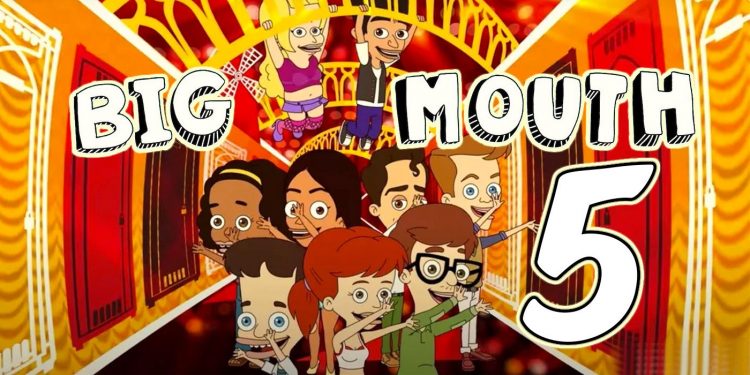 Netflix’s animated teen drama Big Mouth revolves around a group of high-school teens and their struggle with adolescence. These teens encounter several obstacles during their adolescent years and fight them back to check their frantic hormonal giants. Will Netflix renew Big Mouth Season 5? This is one of the questions that the viewers are concerned about. Created by Mark Levin, Andrew Goldberg, Jennifer Flackett, and Nick Kroll, the series is one of the animated series to win an Emmy award. Let’s know more about the series’ fate.

Big Mouth is one of those series that use comedy as a genre to deal with serious and extravagant topics. The series very beautifully covers topics like sexuality, gender, mental health, family, body image without any haughtiness. However, the animated series revolves around Nick Birch, Andrew Glouberman, and his friends through puberty and how they tackle situations during these years. The teen drama focuses on real-life problems that we as humans encounter in our everyday lives. Since its premiere in 2017, the show has managed to capture hearts across the globe. Besides that, all four seasons of the show received much love and appreciation from the audience. We will see what Big Mouth Season 5 has in store for its viewers.

The fourth season premiered on Netflix in December 2020. It consisted of ten episodes, each about 30 minutes long. So far, there isn’t any release date regarding Big Mouth Season 5. But there is some good news for the fans. In July 2019, the show was renewed for three more seasons. At that time the show was about to air its third season. Therefore, we are sure that Big Mouth is definitely renewed up till season 6. Usually, the creators drop new seasons in the fall every year. But thanks to COVID-19. Just like several other shows, Big Mouth too is hampered due to the global pandemic. However, we can expect the fifth installment to release in the final quarter of this year.

The voice-over artists for Big Mouth Season 5 are as follows:

In season 4, Ayo Edebiri gave the sound to Missy’s character. Henceforth, we might expect her to reprise her role in the fifth season as well.

In the last season, we came to know that Matthew is gay. He came out to his mother who was not very happy to hear that. On the other hand, his father was very supportive of him when he found out the truth. Towards the end, Nick Starr, Nick’s future self takes over him. Eventually, Nick defeats Nick Starr with Andrew’s and Missy’s help. In Big Mouth Season 5, we might see the teenagers lashing out their political opinions. Every season of the series revolves around one particular sensory experience. Big Mouth Season 4 dealt with anxiety. However, in the fifth season, the writers will the audience with emotions of female friendship, cystic acne, revenge porn, and much more. In case you haven’t binged the series yet, you should definitely give it a try.

The Deceived Season 2 Release Date, Plot & Everything We Know Yet