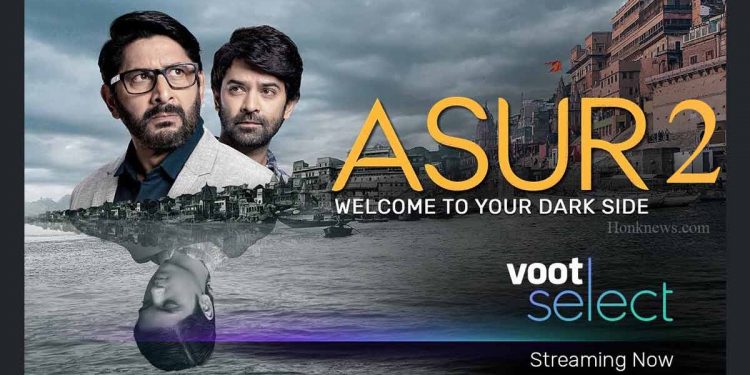 What happens when you meet mythological aspects with psychological ideas? Asur created. The famous Indian web series has truly acted in the favour of the Indian cinema and makes the audience believe that there are still good stories left to explore. Created by Gaurav Shukla, Shweta More, and Vibhav Shikadar, this series has been receiving positive responses since the day of its release.

The first season of this crime-thriller drama was introduced on Voot on 2 March 2020. After the series left the audience speechless with its amazing storyline and ongoing suspense, season 2 became the most awaited one.

I know that there might be some people that haven’t heard about Asur for the last year because there was a lack of proper marketing but trust me! The level of creativity and amazing ideas this series holds is definitely worth checking.

Voot’s exclusive Asur becomes one of the most popular thriller series and when I say thriller, you can think of it as the level of Hollywood. Bollywood series have mostly failed to entertain the audience for the last many years. We see the same old actors creating their way too boring movies, But these web series are something different.

Starring  Arshad Warsi, Barun Sobti in the main lead role, you will see their amazing performance over the period of time. After season 1 was released on Voot, the audience started to look for the future possibility of the series. Definitely, the cliffhanger was making them wait for the next one, but when? In this article, we have everything for you related to this dark, thriller web series in detail. Keep scrolling to know everything about Asur 2.

Asur: Everything to Know!

Asur is an Indian web series that was first released in the year 2020. The series was actually inspired by the popular Hollywood crime-thriller series True Detective. After the series got officially announced by ding entertainment, it was revealed that the series would be made available on the Voot.

Asur becomes the top viewed series of the Indian OTT platform, making it gains more popularity over time. Remember how we used to be obsessed over Sacred Games? Asur can give a tough competition to this Indian web series too.

Starring  Arshad Warsi, Barun Sobti in the main lead role, who are basically the forensic experts and are geniuses in their fields. After watching the series, you will find out that both of their characters once used to be a deadly duo, where Nikhil Nair (Barun Sobti) used to be a student of DJ (Arshad Warsi).

The movie follows the popular Indian Mythological ideas by making the story revolve around god and the devil. The one thing that I like the most about this series is the suspense. From the first scenes, the writer has amazingly screenplays everything to make the audience in suspense.

Moreover, the psychological aspects of this thriller web series are also well appreciated. I would take a quick moment to praise Arshad and Barun’s acting in the movie. The deadly duo has done a great job of creating a serious atmosphere.

Now, the much-awaited season 2 is on-demand and since a year has already passed, is it really coming? Read the next section to find out,

Asur 2: Is it Confirmed?

Asur was released a year before and with 8 episodes being released, fans want to know more about the series. The suspense is talking quite a long time and it is getting serious about whether season 2 will happen or not.

As Asur ended on a cliffhanger, making the audience think of the future possibility, it is quite obvious that the series will be renewed for season 2. Even the love and appreciation by the fans is not a negligible thing, to be honest.

Also, the officials released the confirmation announcement regarding the second installment of season 2. It is officially reported that Asur Season 2 will happen in the upcoming years.

Tons of tweets exploded on the internet and Asur 2 was trending last week. Even the memes were so funny to watch.

Asur 2 release Date: When is it going to be Release?

When season 2 was officially renewed, another question that the readers might ask is when? The release date of Asur is yet another hot topic and we are here to inform you about it.

Asur is officially coming but the creators haven’t revealed the exact release date.

As per some reports, the creators have already made the script ready and the production for the series started. Yet, there haven’t been any official statements regarding this topic.

Moreover, Fans can sense that season 2 would be more exciting and surprising than the first series. On the other hand, the creators have already been under a lot of pressure to make the series worth everything. W

e have already seen that many Indian web series released an amazing first season, raising the high hopes of all the fans. But as season 2 arrives, fans get disappointed. Neither we nor you want to feel the same about Asur 2.

The series is expected to release its season 2 by the end of 2022 or might be in the starting month of 2022. If the show makers would follow the same rituals of their season 1, which was released on 2 March 2020, we can conclude that season 2 will happen around the same time.

The cast of Asur 2 would be the same as Season 1 was. We would see our two main leads in the same role as DJ and Nikil. It is highly anticipated that Arshad Warsi and Barun Sobti would be back as their popular roles in Asur 2.

The cast of the Indian thriller series would remain absolutely the same. In the second season, it would be really amazing to see what actually happens between these two characters and how would their relationship goes over the season. If you have watched season 1 of Asr then you would know that Nikil is already suspecting DJ over all these serial killings. He believes that any forensic expert would be responsible for making such an amazing killing and also can’t get into the hands of the police.

Netflix has just renewed their popular Indian Romantic drama Mismatched. If you are a fan of Dimple and Rishi and want to know what happens after Dimple broke up with his cute boyfriend then Read this article. Find out what would happen in the Season 2 of Mismatched and stream the first part on Netflix.

What are the Ratings of this show?

A well-crafted Indian web series that holds millions of feelings of the audience is here with its season 2. But there are still a lot of people who haven’t been introduced to this amazing web series. If you are someone who prefers to see the ratings of any series before watching it then this is your stop point. Before ending this article, we’ll be discussing the ratings of Asur Season 1.

In the initial release days, the ratings of the thriller series fluctuated with a lot of margins. The series later got balanced ratings by the audience and the critics. Starting with the IMDb rating of Asur, the series has been rated by 8.5/10 ratings.

On the other hand, the audience rating summary of Asuir was 4.6 stars out of 5. I have come forward with thousands of reviews that have praised the series and its plot. Even some people have titled the series as one of the best in Bollywood and I totally agree with it.

Asur Stroy: Must Read The Article Before Watching Asur Series