The Archdiocese of Portoviejo (Ecuador) encouraged the faithful of the province of Manabí to participate in the March for Life, called “Manavida”, on Saturday, April 30, to celebrate and protect life in all its stages, in the face of the threat of the legalization of abortion in the country.

Speaking to ACI Prensa, Fr. Darío Miasick, a Polish priest and coordinator of the Pro-Life Commission of the Archdiocese of Portoviejo, created a year ago, said that on Saturday, April 30, the first March for Life will be held in the entire archdiocese. .

Fr. Miasick, who is also pastor of the San Cayetano de Chone Parish, explained that unlike the annual marches held in vicarages since 2016, this time the March for Life will bring together all the parishes and pastoral areas of the territory.

In the Archdiocese of Portoviejo “we have almost 100 parishes and it is divided into 10 zones,” he said. The participants will gather from 9:00 am in the “La Rotonda” Park, and will march towards the “Las Vegas” Park, where there will be a musical concert by local Catholic groups, he informed.

The priest specified that this year’s event will not be held in August like the other marches, but on April 30, to remember that on this date the Ecuadorian Constitutional Court decided to decriminalize abortion for rape in 2021.

It should be noted that following the Court’s ruling, the National Assembly approved the bill for rape cases in February. But, on March 15, the president of Ecuador, Guillermo Lasso, partially vetoed the project due to its lack of consistency with the Court’s ruling and the legal framework, and proposed 61 alternative texts.

Fr. Miasick announced that the march will include the “Voice of the Unborn” campaign, which was carried out in Poland under the impulse of the “Yes to Life” foundation, and was blessed by Pope Francis. “The bell will accompany us during the march on a platform, and then it will stay in the Parroquia de la Merced,” he said.

This bell, weighing more than a ton, is made of bronze and adorned with two genetic codes that symbolize the father and the mother. In addition, on one of its sides it has an ultrasound image of an unborn child and two cherubs engraved.

The priest said that the parish priests of the churches explained to the faithful during these days that there will be buses located in different parts of the archdiocese “so that everyone can come” to participate in the march, he said.

“We want all children, youth from catechesis, parish groups to participate in this party,” said Fr. Miasick and recalled that it is not a march of only Catholic people, but that people “from other professions of faith” will also participate. such as evangelicals and protestants.

People attending the March for Life must wear white, as a gesture to show “unity in the fight for life”, and carry pro-life signs.

Monsignor Eduardo Castillo, Archbishop of Portoviejo, said in a letter that the march is an opportunity in which “all of society publicly manifests itself for the defense and protection of all human life, particularly the innocent and unprotected.”

It seeks to “face the spread of an increasingly permissive and relativistic culture and legislation with abortion, euthanasia, experimentation on human beings, the affectation of the family, etc.”, he added.

In addition, he explained that compared to the previous marches, created above all in a “reactive” way; that is, to “stop” actions against life, such as laws or judicial resolutions, this time, the aim is to “proactively” design an “ideal social project that protects all nascent and vulnerable human life and its dignity.”

He also warned that the march “should not be presented as a ‘march’ of a set of groups” parochial or specific movements, “but as the demonstration of ordinary citizens, expression of the whole society.”

“If each ‘group’ goes with particular signs and flags, it loses strength… That’s why everything goes white,” he specified.

“In the defense and protection of human life as such, and the positioning of all this in society, we have a lot at stake in terms of the future,” concluded the Prelate.

Caritas serves thousands of needy Venezuelans every week in this diocese

Sat Apr 30 , 2022
Cáritas from the Diocese of Carora, in the north of Venezuela, serves more than a thousand children, the elderly and indigent each week, providing them with food through the so-called “solidarity pots”, as well as other types of help with its social programs. On Fridays and Saturdays, generally, from very […] 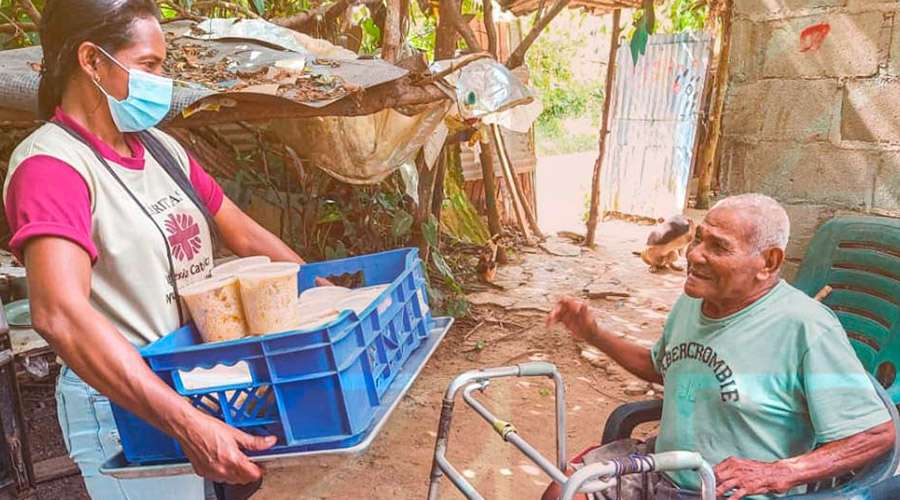