On 4 September 2020, Away premiered on Netflix. It is an American sci-fi drama television web series. Andrew Hinderaker creates the show. Away is a series that will take you over the horizon. It is about the first human mission to Mars. The crew has already traveled to the moon, and now waiting are for the signal. Among them, the Commander has to decide between her work or return to her family.

Story Line of Away

Away is a science fiction series with a touch of drama. It follows the first human mission to Mars. The crew has been assembled across the world to have the best astronauts. Chemist Lu (Vivian Wu) from China, Russian Cosmonaut Misha (Mark Ivanir), Indian doctor Ram (Ray Panthik), British African Male Botanist Kwesi (Ato Essandoh), and American Female Astronaut Emma Green (Hillary Swank). Among them, Misha is the most experienced man in space, and Emma leads the crew as their Commander. But she has to make a tough decision between her career and her personal life.

The show features five astronauts travelling to Mars, and then the main problem arises. A chemical leak had occurred during the early stage of launching, which creates a communication gap. Though, as a sci-fi lover, the story isn’t that strong. But the amount of drama added to this show works superbly. We will recommend you all to – Binge it! Despite the lack of sci-fi stuff but the show is very engaging. Once you start, it will make you watch every episode. 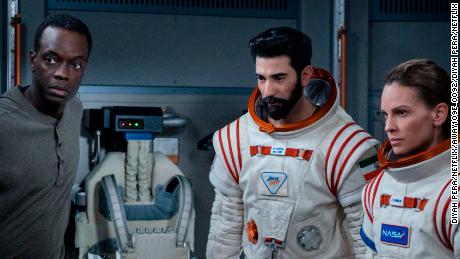 We were away released on Netflix on 5 September 2020. But there isn’t any official announcement regarding the season renewal of Away. However, the show received an overwhelming response. So, let’s hope we get another season. And our prediction is the next season might drop somewhere around late 2021.