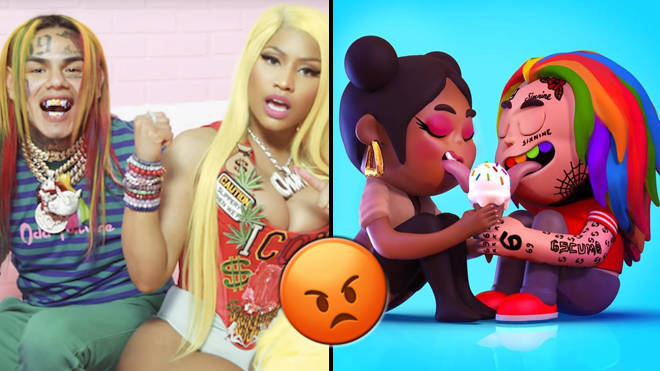 Nicki Minaj is one of the best singers in the music industry. Most of her songs blow her fan’s heart with joy and entertainment. This time, however, fans are not liking her lastest creation with the defamed singer-rapper Tekashi 6ix9ine. The song named ‘FEFE’ is a collab between Nicki and Tekashi that is becoming a subject of the critic. Many of the fans are putting negative comments on the song, asking Nicki not to make a collaboration with Tekashi once again. She made a big mistake by doing this.

Tekashi 6ix9ine is a rapper who was accused of having a minor involved in sexual performance. This fact has him charged with a sentence of 2 years of imprisonment. The rainbow rapper was released in recent times on August 30, after his sentence for two years of imprisonment was complete. It was only because of such reasons that Tekasi became highly defamed and people stopped supporting him. It is the same reason why Nicki fans are suggesting her not to get involved with him.

What’s Nicki Minaj up to These Days

Tekashi69 was kidnapped and robbed after he was released from prison. He was beaten up badly. He posted in a comment if Nicki would still love him even after he is beaten up so badly. Nicki replied that of course, true love is forever. This statement has also left fans to wonder if the two were in a relationship with each other. The fact is Tekashi is in a relationship with his girlfriend for a long time even during her imprisonment. So, Nicki might be just joking in the comment.

so Nicki Minaj hasn’t tired of embarrassing herself yet pic.twitter.com/lMLdBiIrwO

After what Tekashi did in the concert 2 years back, he had only raised haters but very little fans. There are enemies and competitors for him in every step, and also people have chosen him as the most defamed singer in the industry at present.