Angelina Jolie has donated to the lemonade boys to lend a helping hand to Yemen. Angelina has been generous in all the social service things from the beginning. This time again, she has proved the purity of the heart. There are two kids named Ayaan Moosa and Mikaeel Ishaaq, who have started a lemonade stall to raise funds to help the people suffering in Yemen. They are trying to sell a cup of freshly squeezed lemonade at $3 to raise funds.

The actress addressed the LemonAid boys on her Instagram and said that this time she might not be able to buy a lemonade from them, but she will have a lemonade next time. The kids also said they would treat the actress with a fresh cup of lemonade next time she visits the UK. The family did not disclose the exact amount that Angelina donated for raising funds, but they did disclose that the total amount has reached up to some $76000.

What’s LemonAid Boys up to These Days

The LemonAid Boys raise funds, collect the amount, and give it to One Nation. That is a UK based relief and development charity. The collected money is used to make resources like essential food packs, water supplies, and critical medical care equipment to Yemen citizens. Yemen has been under the state of conflict since 2015. Nearly 80% of the people there that counts to 24 million people starve each day. The economy has dropped so much that people are even unable to avail of the basic enmities. 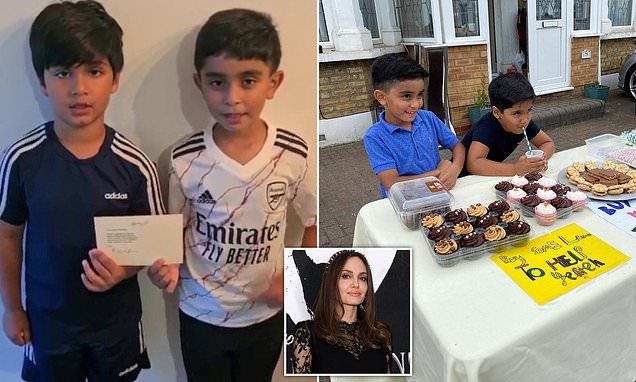 In such a massive humanitarian crisis in Yemen, it becomes our responsibility to lend a helping hand for people to survive. The actress has donated and has shown her concern as a human. You can also help Yemen by donating in this link: https://www.justgiving.com/fundraising/lemonaid-boys.