Tom Holland SPOTTED Getting COVID-19 Test! – Is He SICK OR WHAT?

Tom Holland has undergone through COVID-19 test. This is the sensational news that everyone wants to know about the truth, whether he is infected with coronavirus or not. Well, here is the answer to all the questions. Just read it ou to clear your doubts.

Recently on July 8, the ‘Spiderman’ actor has posted a story on his official IG account. In his story, he was in a hospital showing his mouth to a fully covered doctor. The story depicts that he was undergoing through swab test, in which, in the first clip, he wrote ‘First Day Back.’ And in the second video, he captioned as ‘Smashed It.’ 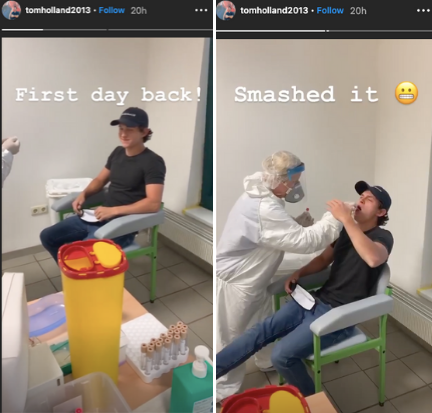 This story kept everyone in a dilemma about his physique. But, clearing the doubts, he was just testing to go back for work. As the pandemic already resumes all the works and previous shooting. So he was there to ensure his physique to restart his work on the unspecified project.

What Is Tom’s Unspecified Project?:

However, Tom hasn’t said anything about the unspecified project. But, according to the sources, he did so to resume his shooting for ‘Uncharted.’ In April, the Avengers: Endgame actor in an interview said that COVID-19 made too much delay and continues all shooting.

And now its time to go back to work again. Tom was working in Nathan Drake’s movie ‘Uncharted,’ in which he role as adventurer and treasurer. It is based on the Naughty Dog’s video game series.

‘Cherry’ is the other project for Tom by Russo brothers, where he will star as Nico Walker. It is based on the crime drama story. In an interview with Russo Brother, in April, he said that they paused ‘Cherry’ shooting amidst pandemic. But he resumed it in February only. Well, who can wait so long for the pandemic to get over? So, let’s wait for Tom’s next move it make it blockbuster.