Ashley Benson and G-Eazy may have just met, but their chemistry is lit. The duo may be hinting their fans that they are a formal couple by doing all ‘couple-like’ stuff. Recently the Hollywood popular faces were spotted together being cozy with one another.

🦖 bored in the house

Ashley Benson and G-Eazy have been seeing one other and giving public appearances from time to time. Recently they were spotted having dinner together in Hollywood and were all smiles.

G-Eazy and Ashley Benson were spotted hand in hand, taking a refreshing hike. The duo decided to get some fresh air. The coronavirus pandemic has gotten us all confined to our homes. So, getting hold of some fresh air is never a bad idea. Both of them were seen wearing matching ensembles. 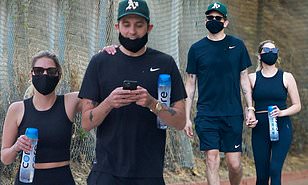 Ashley was dressed in a black crop tank top with black leggings. She had black running shoes on, and she had complete her look by pulling her hair in a ponytail and black sunglasses.

While G-Eazy was seen wearing a black Nike tee with black shorts, socks, and shoes, both of them had black cloth face masks on too. They had matched their looks in such a beautiful way and gave couples out there some serious couple goals also.

How Did G-Eazy And Ashley Land-Up Together?

What was your favorite song off the album? 6 years ago #TheseThingsHappen dropped and changed my life forever…To celebrate, im gonna go on IG live tonight @ 6pm PST and run back some of the early stuff and play some off the sequel and talk about the journey it’s been #TTHT #ESH 🥂🎉

G-Eazy and Halsey were a huge couple, but the two ended up real bad. WIth Halsey breaking over her breakup and releasing songs for the same, G-Eazy had a real hard time coping with it all. But now he has found someone new for himself. This lady love of his has had her fair share of drama in her love life too.

Ashley Benson was previously linked to model and actress Cara Delevinge. Right after Ashley spit with Cara, G-Easy got hitched to her. G-Eazy had collaborated with Ashley on his new album, ‘Everything’s Strange Here.’

A kiss with a cause. This Valentine’s Day when you share a photo of you and a loved one— a significant other, a friend, a pet—you can also raise awareness and help create a future with more survivors thanks to @su2c #KissCancerGoodbye campaign ❤️