Model Irina Shayk was breaking social distancing rule with Art dealer Vito Schnabel. She was earlier married to Bradley Cooper. The couple split up ten months back. Rumors are that the split was caused due to Bradley’s growing closeness with A star is Born co-star Lady Gaga. The former couple also has a daughter together named Lea.

Where were Irina and Vito Spotted?

In some recent exclusive images, the 34-year-old Irina Shayk was seen braking social-distancing rule with Art dealer Vito Schnabel who is 33. The model was snapped entering the Manhattan apartment of the art dealer on Friday in New York City. However, this is against the lockdown guidelines for people who don’t live together.

The duo was spotted together wearing masks to prevent the pandemic COVID-19. However, they temporarily removed the covers from their faces.

Here are the pictures: 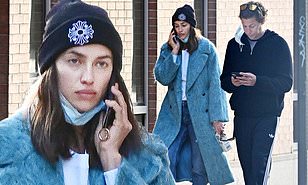 Irina was seen sporting a bright turquoise blue fur coat. Pairing with a white top and blue denim jeans. She accessorized her look with a black beanie. She appeared to have bought water while taking a stroll and was always glued her phone to her ears. While Vito too had his eyes fixed on his cell phone.

Earlier in the month Mayor, Bill De Blasio released strict instructions for the residents of New York City to stay indoors until necessary to hinder the spread of the pandemic virus.

All nonessential businesses are shut down. And all nonessential gatherings have been banned. All residents were advised to stay indoors and practice self-quarantine. And only step out to buy necessities. People also recommended maintaining a six feet distance until they are living in the same house.

They may be just friends. However, the duo was seen taking significant risks by taking a stroll together. At the moment, New York is the epicenter of the pandemic.