The former Glamour Model, Linda Lusardi is fighting for her life against the coronavirus. Lina was put on oxygen and drip on Tuesday.

Linda is an English actress, former model and TV Presenter. She’s been on famous reality TV Shows such as ITV”s Dancing on Ice and Celebrity Masterchef.

Samuel Kane, an English actor, and singer is married to Linda and has appeared in soap operas like Coronation Street, Brookside and Emmerdale. He also participated in 2006 Dancing on Ice.

Her husband, Sam Kane, said his wide is on the death’s door, she’s nowhere out of the woods. She’s remained in the 4 walls of her hospital room since last Friday.

Both Sam and Linda were tested positive for the virus; Sam recovered, Linda, on the other hand, was getting worse.

Married for almost two decades, Sam reported that there is hardly a fighting chance for Linda. The actor said that Linda needs all the help she can get at the moment. He asked fans to continually send her positive messages to get her through this tough time.

Sam worriedly says:  “I’ve felt it take me there. It’s a cruel, vile, remorseless, relentless, dark sickness. It was like three hands. One that’s strangling you.” 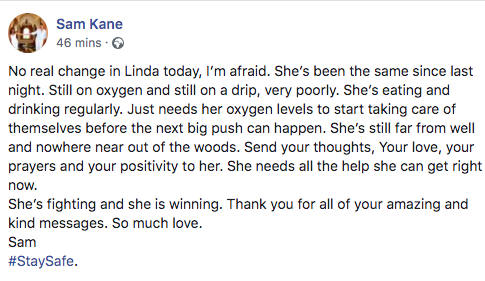 Later, Linda informed fans that both she and Sam are a victim of this killer disease. Sam was discharged to continue his recovery from the diagnosis.

Linda said she was “holding on” and thankes the hospital staff to her help as best as they could.

Being 61, in the category of the most affected people, Linda has slim chances of surviving. We send her all our prayers and positivity. May she recover from the dangerous virus as soon as possible, we hope she comes out alive. All Strength to Linda and her family

Adrian Chiles Accepts Being Addicted To Alcohol On The BBC In...

Meghan Markle And Prince Harry Relocate To LA Coz ‘THEY CAN’

Chilling Adventures Of Sabrina Season 4: Everything We Know About This...

Dive Into The ‘Westworld’ With Latest Updates On Season 3 &...

5 Angelina Jolie Movies You Can Not Miss If You’re A...