As many Marvel Fan knows, Tony Stark aka Iron man, is the heir to Stark Industries. His parents were Howard and Maria Stark. However, usually, the family tree of Marvel characters is a little disoriented. It seems like that is the case going on with our beloved Iron Man as well.

What is the reality of Tony Stark? 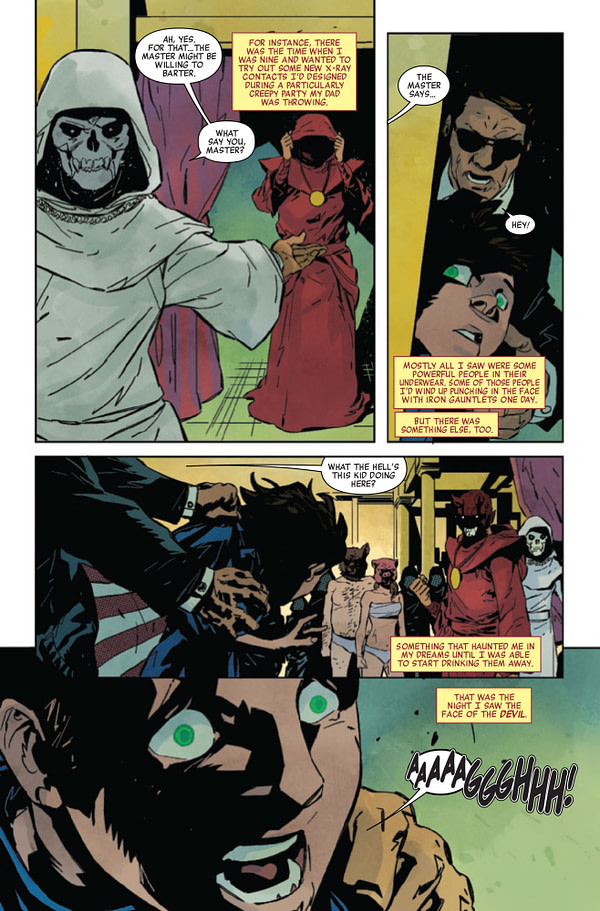 In 2016’s Internation Iron Man by “The Great One”  Brian Bendis and Alex Maleev. It is revealed that Tony might not be the actual son of Howard. According to this version, Tony’s real parents were S.H.I.E.L.D. agents Jude and Amanda. In the comics, Jude is shown as a double agent working for both Hydra and S.H.I.E.L.D.

This makes Amanda kill him and put a young Tony up for Adoption. Which finally explains how Tony ends up in the house of the Starks. This isn’t the actual story as well though.

The new secret of Tony Stark will leave you shocked

Avengers #31 reveals a bigger and more unique secret to the fans.

The preview for the new edition released over the week. And the sneak peeks already have everyone talking. We already knew that Howard had a predilection for the debaucherous sex parties of the Hellfire Club.

Tony Stark currently trapped One Million years back in the past suddenly is shown remembering the elder’s Starks. He witnesses their creepy satanic rituals one night.

Back in the present, a lot of cavewomen are passing by offering food and alcoholic beverages. But the twist is they aren’t gifts but rather and offer. The only question that remains is from whom?

Of course, it turns out to be his father, Howard Stark. Who comes down to in the form of a snake. Before people can question what is snake doing 1 million years ago in the past. We see as young Tony chops it in half.

What ensues after this is something people need to find out in Avengers #31, which comes out in stores tomorrow.