The Inner Sane
Home TIS EXCLUSIVES Heartless Mother Uses Child As The Source To Attract And Get Chased...
TIS EXCLUSIVES

Heartless Mother Uses Child As The Source To Attract And Get Chased By A Man.

Recently, a mother was seen abandoning a baby on a man’s doorstep before running away. The story does not end there; the man takes the baby and chases after her. To top things off, this whole incident was recorded on camera, and the video was posted online. 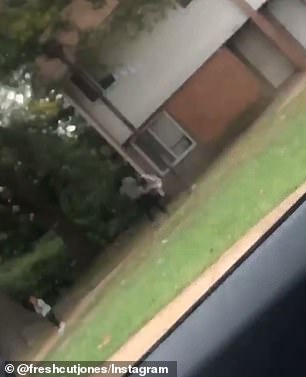 What Happens In The Video?

The crazy video shows a woman carrying a baby seat to a house and putting on a doorstep before running away. As she is taking the baby to the door, the children playing around could be heard shouting at her. However, the lady ignores the children who are screaming at her to get away and places the baby down. The woman yells that the child the outside before making a run for it.

Unfortunately, she does not get far before a man rips open the door, takes the baby seat in one hand, and chases after her. The man curses after her as she gets on the car and screams that he would trash her vehicle.

Shockingly, this man puts the baby down haphazardly in the middle of the road and starts wreaking the car. If that wasn’t shocking enough, the man then punches the woman’s car window and breaks it. He then tried to break her other window as well, but it didn’t work.

All this time, both the man and woman are seen shouting at each other and cursing each other to hell and back. The saddest thing is that nobody cared about the sick baby, in the middle of the street, unwanted and ignored by everyone.

What Has The Response Been To This Video?

This shocking video was initially posted on Instagram from where it went viral. It was shared by @FreshCutJones, who is a St. Louis based barber. The netizens had varying reactions from seeing the video. Some netizens felt sorry for the baby and felt their parental instincts kick in. Other netizens did not understand what was going on and were just confused by the video. The majority of netizens thought that the video was funny, and they liked how the guy ran after the woman. Of course, they did feel bad for the baby, but they still thought that it was funny.