Florida Cop Arrests 3 Bikini Models, And Looses His Job As He Tried To Film The While They Were Naked.

A policeman from Florida has been placed on administrative leave after he appeared in an Instagram video. The video featured three scantily clad women being arrested by the officer.

The officer, William Beeker, can be seen marching three women towards the Miami Beach police station. One of them is the Playboy model Francia James. He is then seen lining the women with their backs to the camera, giving them a once- over. Throughout the video, the women are wearing lingerie and handcuffs- nothing else. 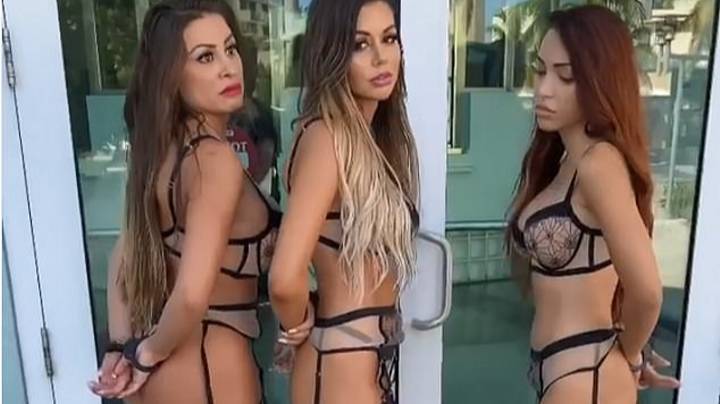 James shared the clip on her profile, which has garnered more than 644,000 views. She captioned the video: “Do you like bad girls or good girls? Who’s gonna bail us out?”
The video had been viewed more than 1.4 million times in total after the other models shared the same.

There was a follow- up video posted as well. Beeker can be seen surrounded by the models while sitting on his all- Terrain Vehicle. The women are then seen saying, “Thank you, Officer Bill, for letting us go.” He then responds, “No problem, enjoy the community! I like to protect and serve. He then heroically speeds off on his quad bike.

Investigation underway against the officer

A short while later, his employers released a statement in which they confirmed that his actions would be looked into. A police spokesperson said that the department was made aware of the video on the 7th of October. Chief Richard Clements launched an Internal Affairs investigation. William Beeker was placed in an administrative capacity while the research takes its course.

The officer has received both positive and negative comments online. One Twitter user wondered if all Police Departments were scrapping the bottom of the barrel when hiring officers. If there was a shortage of decent Americans, immigrants and refugees could be brought in to do the job. The user added that they are suitable and will gladly do the work. Another user begged to differ, however, saying that this was hardly an issue in the first place. “out of all the issue these days… this is pretty light and almost a non- issue.”

On And Off Couple; Zayan Malik And Gigi Hadid, Is Officially...

Avatar 2 To Take It’s Audience On A New Journey Unlike...

Impossibly Inseparable Couple, Miley And Cody Get Approval From Family, According...

Stranger Things Season 4: Hopper Is Alive! A Shocking Revelation To...

Officially Lucifer Season 5 Is Near To End Than Expected Date:...