Horrifying footage has emerged of a mother and a daughter fighting on the streets. They got filmed on a housing estate in Grangetown, Middlesbrough, North Yorkshire. A woman in wellies is seen smoking at the beginning of the video. Then, another woman in black-striped grey joggers and a grey t-shirt starts running towards her. The woman in the willies then got on top of the other one and started throwing punches. How did the pair finally break up the fight? Stay tuned to find out more details on their disgusting behavior and what the police did.

As the woman in joggers ran towards the one in wellies, she finishes her cigarette and confronts. The two start shouting at each other. Then, they launch into each other and start throwing punches. The woman in wellies says ‘Go on Trish’ and then hits her repeatedly in the head. Then the woman in wellies is lifted off the other one by a neighbor and placed on the ground.

Someone says ‘let them get on with it’ and a larger crowd begins to gather. A woman in red hoodie kicks the woman lying on the ground. Then, the pair continues to scrap. On the scene, a man with a baseball bat and two children also gather. The man with the bat sways it in the air and another man in a jacket approaches him. This man bends down to break up the fight. As a result, many views started suggesting that he was wearing a thong. The fight is then broken up after the pair takes it to the footpath. One is taken into a house and another into a car and it all ends. 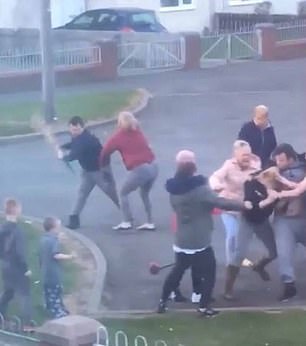 The footage was posted by Zara Davison on her Facebook page on September 5, 2019. It received more than 1,500 comments and about 358,000 views. Many viewers were outraged because the pair fought in front of young children. The police have a report of an ongoing fight but no crime has been reported. Nobody has come forward with injuries either. Someone even commented that what chance will our kids have if they see adults behaving in such a manner