The Inner Sane
Home TIS EXCLUSIVES Miley Cyrus Spotted Getting All Cuddly With Kaitlynn Carter While Her Divorce...
TIS EXCLUSIVES

Only Miley Cyrus could enjoy fancy lunch when her divorce proceedings with Liam are still ongoing. She was spotted with her new girlfriend, Kaitlynn Carter, and her mother, Tish, on an outing. Since their vacation in Italy, you can spot them kissing almost everywhere. They are coupled up way too tight, sometimes even in matching outfits. Grabbing lunch with Miley’s mum hints at the relationship getting serious, kind of. We could even say Mommy Tish is acting like a chaperone or something for the two. She is now a fixture on their dates! Stay tuned to know how they are finding strength in each other after their respective break-ups.

The singer was spotted with the ex-wife of Brody Jenner, walking from the valet stand with her arm around her. They both had broad grins plastered over their faces. Miley’s mother was no hindrance and they continued to get touchy-feely in front of Tish. The Wrecking Ball singer rocked a casual look with a plain white t-shirt and denim shorts. Her hair was tied up in a messy bun and a maroon purse was slung over her shoulder. Carter was almost twinning with a white shirt that exposed her midrib, blue jeans, and white slip-on sandals. Her Louis Vuitton purse had a gold link chain hanging from her shoulder, plus she wore dark sunglasses. As they walked from the station to their vehicle, the two had arms around each other, adorably. 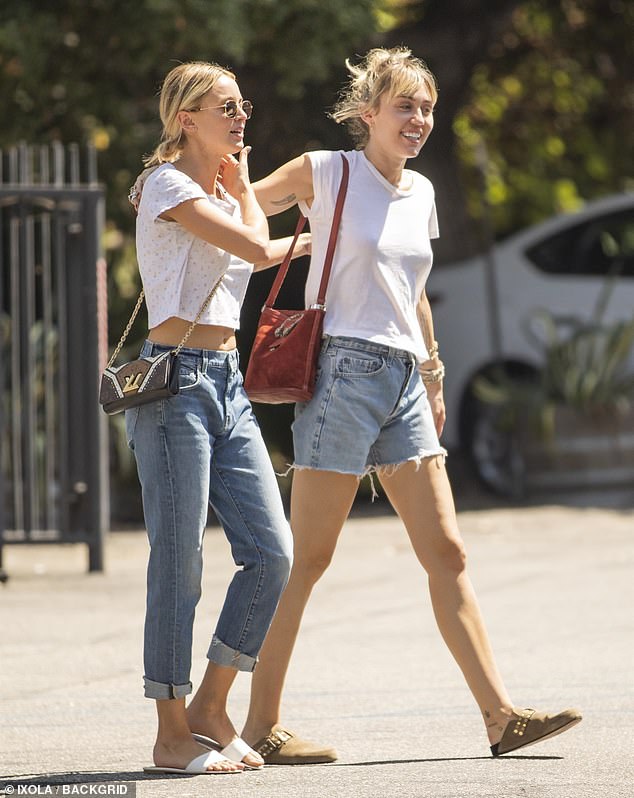 Slide Away from Liam

Within the first year of marriage, Miley Cyrus split with Liam Hemsworth in August. Their romance dates back almost an entire decade. Hemsworth filed for divorce within 11 days due to ‘irreconcilable differences’. Within a day of announcing separation, Miley was spotted making out with Carter. She then released ‘Slide Away’ which is speculated to be about her separation from her lover of 10 years or so. They probably haven’t even spoken to each other since the breakup. Sources are claiming that the divorce will be settled by this Halloween. We can safely say that cozy Carter is the new person in the pop star’s unmarried life.